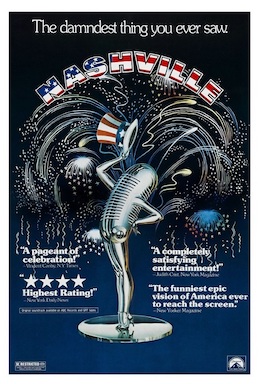 Robert Altman’s magnum opus, Nashville has the city has its set and, seemingly, its entire population as the cast. Over the course of a few days, Nashville charts the interweaving lives of a host of people making (or trying to make) a living in the home of country and western and the hangers on and fans flocking around the edges. Meanwhile a presidential campaign plays out, trying to recruit stars as fund-raisers.

You could say that, on the surface, Nashville isn’t really about anything. Certainly, it’s plot (such as it is) is more based on observing our characters interacting with and responding to events. Wonderfully rich short stories overlap each other, the focus mothing smoothly from one and another. It’s not really grounded in an overarching plot, such as McCabe andMrs Miller or The Long Goodbye. In many ways its more similar to M*A*S*H, an experience piece trying to capture the thoughts and emotions of a particular moment of time. It’s that which I think is the heart of it. Nashville is about very little, but really it’s about everything – and it’s one of the most enlightening and vital studies of twentieth century America you are ever going to see. A rich and fascinating insight into a particular point in history, in a country rife with tensions.

You can’t escape that Nashville takes place in an America under the shadow of traumatic events. The 1970s (and the legacy of the 1960s) has pulled America further apart than ever. It’s a country struggling with a wave of assassinations, still deeply scared by the sacrifice of JFK (several characters, most notably Barbara Bexley’s permanently intoxicated Lady Pearl, reflect on the loss of innocence that came with it). Scott Glenn’s uniform clad army private is only the most visual reminder that the country is being ripped apart by Vietnam. Bubbling racial tensions are captured by short-order cook Wade (a lovely performance by Robert Du Qui) who angrily denounces black country singer Tommy Brown (a suave Timothy Brown) as an Uncle Tom.

Politically, America isn’t heading anywhere. The film is continuously framed by a car literally driving around in circles, blaring out meaningless platitudes straight from the lips of Hal Phillip Walker a third-party Presidential candidate who is against a lot of stuff (lawyers in congress and the Election College) but doesn’t seem to be ‘for’ anything. His smooth advance man John Triplette (Michael Murphy, quietly unimpressed by the music stars around him) drums up musicians to appear at a benefit – not one of whom even ask about the politics of the man they are being asked to endorse. Nashville isn’t a film that feels particularly enamoured either with politics or the level of our engagement with it.

Instead there is a new religion in town: fame. The musicians of Nashville at the time were unhappy with the film, feeling that Altman planned an attack on their industry. Altman is, of course, smarter than this. Of course, there are some satirical blows landed – but the film has respect and admiration for artists with genuine talent. Its real criticism is for fakes and poseurs (of which more later). But for the talents at the centre, sure they are flawed – but there is a respect for their skills and genuineness that keeps the film relatable. (Altman would be far more vicious when he turned his eyes to Hollywood with The Player).

The artists at its heart are flawed but human. Haven Hamilton (a grandiose Henry Gibson) may be a blow-hard reactionary, but his patriotic pride and sense of personal responsibility is genuine (late in the film he will ignore a serious injury to show concern for others). At the film’s centre is fragile super-star Barbara Jean (a delicate Ronee Blakely), the beloved super-star teetering on the edge of a dangerous breakdown, overwhelmed with the pressures of fame and expectation. A lonely person, reduced to trying to communicate her unease to her audiences in rambling monologues. Looking for a human connection she’s unable to make elsewhere (this makes for a neat contrast with her rival, Karen Black’s bubbly but coolly distant Connie White who knows where to draw the line between public and private).

This humanity also makes for intriguing personal dilemmas. Singing trio Tom (a swaggering Keith Carradine), Bill (a frustrated Allan F Nicholls) and Mary (a saddened Cristina Raines) are in the middle of a love triangle (caused by Mary’s love for Tom, who loves the attention but doesn’t return the favour). Made more tense by Tom’s desire to go solo, the couple’s tensions are never firmly resolved – part of Altman’s avoiding of neat endings. Tom himself, in many ways a shallow lothario, is also shown to be feeling the same loneliness and emptiness as others.

It’s interesting that the film’s warmest character, Lily Tomlin’s Linnea, lies half-way between the world of the music and the world of normal life. A dedicated performer of gospel with an all-Black choir, Linnea also works tirelessly at home to support her two death children (who attract very little interest from their father, would-be fixer Ned Beatty). Linnea though is never portrayed as someone trapped in her life, in the way others are, but in complete acceptance – and even contentment – with her lot. Similar to Keenan Wynn’s grieving husband, desperate for his niece to engage with her aunt’s illness, the film’s real warmth is for those people grounded in real-life worries.

The film’s real fire is saved for the shallow wannabes that flock around the edges. The music stars may be flawed but they have talent (as witnessed by the film showcasing almost an hour of musical performance in its runtime – all the songs written and performed by the stars). Shelley Duvall’s would-be groupee is hilariously empty-headed and selfish. Ned Beatty’s greasy-pole climbing political animal is ridiculously pompous. At the top of the pie is Geraldine Chaplin’s reporter, an empty headed fame obsessive, hilariously fawning to the rich and famous and abrupt and rude to ‘the staff’, pontificating emptily in a car junkyard. Is she even a real reporter or just a fantasist?

Altman’s film also finds time for two very different women trying to find fame in this heartland of country and western. Sueleen Gray (Gwen Welles) is a waitress carefully cultivating all the patter of a star, but lacking the key attribute – talent. So desperate is she to ‘make it’ that she is willing to be exploited for a big chance, with only Wade having the decency to tell her she should cut her losses (advice she bats away in anger). By contrast, Barbara Harris’ Albuquerque, running from her husband to find fame, as the talent but never gets the opportunities – until of course at the very end (and it’s the result of the tragic fate of another woman whose doomed fate hangs over the film).

Nashville is a rich character study, but all these characters link back into an America at a turning point in its cultural history. Detached and disillusioned with politics, this is a country that is starting to see fame – and the indulgence of your own passions and desires – as the new religion. A religion that attracts both wannabes and also stalkers and dangerous obsessives (at least two of whom populate the film, one with fatal consequences). In this world, as idealism dies and is replaced by cynicism, people start to check out and either engage more with their own problems or yearn to change their lives and become something else. Altman’s film captures this moment in time personally, as well as being a compelling melting pot of stories. A rich, multi-layered tapestry – of which a review can only scratch the surface – it’s a great film.