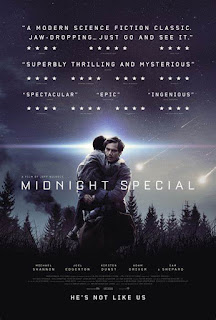 At some point around its original release, someone attached the label “Spielberg-esque” to Midnight Special. I suppose this may be due to its father-son central relationship and its rough similarities to Close Encounters. But it’s a label that does the film no favours. JJ Abrahms would create a Spielberg-esque film, but Jeff Nichols? Pull the other one. Instead Jeff Nichols creates a sci-fi film that wilfully avoids explanations and turns its back as often as it can on any sentimentalism. It’s more like James Cameron crossed with existential philosophy. It certainly won’t be offering up easy entertainment.

Roy Tomlin (Michael Shannon) is on the run from the law with his son Alton (Jaeden Lieberher), helped only by his friend Lucas (Joel Edgerton). Alton has mysterious powers – glowing eyes, elements of telekinesis and the ability to intercept electrical signals – that have made him a target for everyone from the government to a cult that has kept him under lock and key for years, believing he holds the key to surviving the inevitable apocalypse. Alton has an aversion to sunlight which means our heroes can only travel at night, heading towards a secret location, trying to stay one step ahead of the dangerous figures following them.

Nichols film is almost too elliptical for its own good. But then I think this is partly Nicholls point. He’s looking to subvert a few expectations here. To create a sci-fi, other-world chase movie that’s wrapped itself up in enigmas. Sadly, I think to have enigmas like this become truly engaging, you need to form a connection with the film itself – and Midnight Special fails too much here.

It keeps its cards extremely close to its chest – it only begins to dive into any sort of explanation about what’s going on over halfway into the film, and even then this is kept vague and undefined. There is virtually no exploration given of most of the characters of their backstory, bar a few key points. It’s a chase movie which frequently slows down to a crawl. It’s a science fiction film that’s largely confined to the ‘real’ world. It’s a father-and-son on the run film, which separates these two characters for a large chunk of its runtime. All this makes it very difficult to form an emotional attachment with, in the way you do with, say, Close Encounters or The Terminator (both of which have traces in the film’s DNA).

Not that I think Nicholls will mind, as this is an attempt to do something different, more of an existential musing on humanity. Its unfortunate that this was exploration of personal regrets and tragedies against a backdrop of earth-shattering sci-fi revelations was done more absorbingly in Arrival among others. Compared to that, Nicholls film seems almost a little too pleased with its deep (and in the end slightly empty) mysteries and its opaque characters, many of them defined more by actions and plot functions rather than personality traits.

There’s strong work from Shannon as a father desperate to do the right thing and Lieberher as young boy who becomes calmer and more in control as the film progresses. But we never quite learn enough – or understand enough – about either of them to really invest in their fates.

And without that investment, its hard to worry in the same way about what might happen to them – or to really care about the revelations they are seeking to discover by the films conclusion. The film could counterbalance this if the ideas behind it were fascinating enough. But I am not sure they are. It touches upon questions of faith, parental love, destiny and human nature – but it studies them like they were under a microscope. Ideas are there to be excavated from it, but that doesn’t always make for great story-telling. Take the cult: there are fascinating ideas about the honesty (and pervasions) of faith, contrasting this perhaps with the overwhelming faith the father has in his son’s fate. The film introduces this – and then doesn’t really give it any depth.

It’s a problem all across the film. It’s partly a meditation on human progress and enlightenment – but the film never makes a compelling case or intellectual argument about it. Again there’s some great opportunities here, not least with Adam Driver’s fine performance as a sceptic turning believer – but it even that plotline eventually gets reduced to simply allowing someone to move from A to B for plot purposes. The film – for all the skill it’s made with and the obvious talent of Nicholls – is cold and distant.

And a cold and distant film is eventually going to get that reaction from a lot of its audience. Those who can see its merits, but never engage with it – or care about it – enough to really seek it out.