Spoilers: If you can spoil a film made 76 years ago… but the ending will be discussed 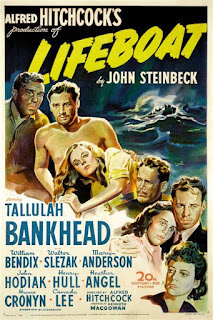 The middle of the Atlantic at wartime. A ship has been sunk by a German U-boat, which was itself sunk in the exchange. A single lifeboat picks up survivors, a mixture of passengers, crewmen – and a German sailor from the U-Boat. Low on food and water, with only a faint idea of where they are, can they survive long enough to find either land or another ship? That’s even before we can overcome questions of trust – or not.

Taken from a scenario written by John Steinbeck, Alfred Hitchcock was originally attracted to Lifeboat because he fancied the idea of directing a film that was set in only one location. And a tiny one at that! Needless to say, such is the imagination and skill the film has been made with that you will soon forgot that it all takes place effectively in one tiny room. Instead, as the camera skilfully cuts and moves through the boat, finding intriguing angles and never once let the pace slip, you’ll be sucked in this intriguing story of survival and morality.

Lifeboat was attacked at the time precisely because of these difficult questions of morality. Unlike many other war films of the time, it wasn’t just interested in propaganda. Instead the German here – later revealed to be the captain of the U-Boat – is not only the films most charming and engaging character, brilliantly played by Walter Slezak, he’s also the only one that has any real idea about how to survive. Need a sailor? He’s best qualified. A navigator? The only man with a clue. Need to lop a gangrenous leg off? Willie can do it with a pen knife. His resourcefulness needs to be weighed in the balance though with his lies, manipulations and hording of supplies.

But the fact the film presents us with a Falstaffianly rogueish German, rather than a monster – and also makes him the most effective of the survivors – was a problem at the time. Combined with the fact that the representatives of the allies are a mixed and divided back. A chippy socialist sailor. A decent but ineffective radio operator. A jobsworth nurse, possibly carrying someone else’s husband’s child. An ambitious gossip columnist. An industrialist who assumes he should call the shots. And a black steward who even needs to take a moment to think about before they decide to treat him as an equal, or even use his real name. A unified and decisive group of allies, this ain’t.

The events of the film then develop in a host of challenging ways. Sure, our heroes eventually come together – but its in a murderous fury that sees them lynch Willie, beat him to death and throw him overboard. Willie saves their lives – but he also hordes water and then persuades the delirious Gus (whose leg he amputated) to throw himself overboard when Gus spies his secret water stash.

This lynching scene is the heart of the film – indeed most of the action is a slow, tension-filled, build towards it. And, for all that Willie is a seemingly unrepentant Nazi (dropping broad hints about having spent some time in Paris) who we are told ordered the shooting of survivors in the water, its hard not to feel some sympathy for him as Hitchcock cuts to a close up of his horrified eyes as he realises what the passengers are about to do. Just as the passengers, waking to find Gus gone and Willie assuring them it was for the best, take a on a monstrous inhumanity as they murder him.

Hitchcock described them later as a pack of dogs. Of the passengers, alarmingly it’s the two most decent (Hume Cronyn’s gentle radio operator and Mary Anderson’s nurse) who turn the most savage in the onslaught. Only Joe – perhaps remembering other lynchings he may have witnessed? – keeps a horrified distance from the slaughter. In a traditional propaganda film, as many critics wanted at the time, this would be a moment of triumph. The allies coming together to vanquish their common foe.

Instead, it intentionally leads a queezy and unsettling taste in the mouth. Hitchcock seems to be challenging us to ask just how we feel about this. Willie has done terrible, greedy, awful things. He’s got a lot of blood on his hands. But do we feel its right for these guys to murder him – and as brutally as they do here? (Hitchcock shoots the lynching at a distance, the passengers descending on Willie like a mob, his bloodied face emerging at one point before being dragged back in). There is nothing really triumphant about this. And, after the deed, no one seems sure how to process it. Rittenhouse even suggests Willie deserved his fate for his ingratitude after they hauled him from the water.

As safety is finally found near the end, it’s not clear what anyone has learned. The whole ghastly cycle looks like it might be repeated when a young German sailor is hauled onboard after another supply ship is sunk. Some passengers are ready to butcher him immediately – the sailor fortunately is armed. Sanity just about prevails, but already the passengers are beginning to revert, right down to starting to address Joe by the common short-hand name for a black steward, George.

But then at the same time, it’s not as simple as that. After all, these German sailors sunk a ship killing hundreds of people. During the first night on the boat a baby dies in his mother’s arms – the mother then throws herself overboard the next night, despite the passengers attempt to restrain her. Those deaths are discussed again at the end when the passengers obliquely wonder if they did the right thing. The film won’t say for sure, but leave it to you to decide. And it’s that rich sense of unease that helps make this a rather overlooked masterpiece for Hitchcock. A lot more than just a technical triumph, it’s a searching and questioning film.