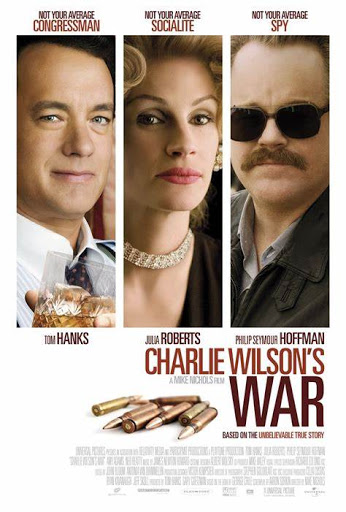 Did Congressman Charlie Wilson (Tom Hanks) end the Cold War? Well no, of course he didn’t. But he might just have managed to make the US notice that Afghanistan had the potential to be the USSR’s very own Vietnam. Despite his reputation as a playboy, Wilson had a shrewd understanding of geopolitics and – encouraged by millionaire backer Joanne Herring (Julia Roberts) and helped by firey CIA agent Gust Avrakotos (Philip Seymour Hoffman) – arranges for money and arms to be pumped into the Afghan Mujahideen throughout the 1980s. Shame that funding stopped just as the Taliban emerged into the power vacuum.

There is a compelling film to be made here around how the US’s short-sighted policies in Afghanistan during the 1980s led to catastrophic implications in the 2000s. This isn’t that film. Instead Nichols – with some playful rat-a-tat dialogue from Aaron Sorkin – settles for a political caper, which only nods vaguely at the future disaster of 9/11 in favour of a feel-good, against-the-odds triumph. It’s a massive shame, as a third act which really embraced how policy failures in Afghanistan contributed to the rise of the Taliban and Al-Queda could have been compelling and thought provoking.

Watching this film you could come away with no real idea why the fighters the Wilson works so desperately to get defensive anti-aircraft missiles to, would end up recruiting young men to fly planes into buildings. The film nods at this, with Wilson failing to raise even a paltry million for investment in education and healthcare in Afghanistan post-Soviet occupation (after raising billions for weapons to fight the Soviets). But we don’t get a sense of the bigger picture here. How did hatred for the Russians, with the Americans as allies, flip into fury at the West? The film doesn’t want to think about it.

Instead this is a light bit-of-fluff. It’s a comic drama of the sort Hollywood loves: the playboy with immense depth. The hero whose heart melts at a refugee camp and dedicates himself to helping people. The film uses as a framing device a medal ceremony, with Wilson being praised for his vital role in bringing about the defeat of the USSR. It’s all feel-good – and for all we see at the end a brief moment of Wilson in tears at his failure to ‘finish the job’ by offering real hope to the Afghans – and that doesn’t feel like the whole story.

There is plenty of comedy though, even if the political awareness is light. Gust and Charlie’s first meeting is a well-staged farce of Wilson juggling geopolitics with heading off oncoming scandal, that requires Gust to frequently step in and out of his office as two different conversations take place. Comic material is mined from Wilson’s handpicked office staff of attractive women who, contrary to expectation, turn out to be brilliantly insightful and hyper-competent. CIA agent Gust is a gift of a role for Philip Seymour Hoffman (who is great fun) as a foul-mouthed, just-this-side-of-OTT maverick who genuinely cares about his job.

Hoffman fares better than the other two leads, both of whom feel miscast. The casting of Hanks and Roberts seems designed to keep a film that could have been a sharp attack on America’s world policy feeling as cosy as possible. After all, this is America’s uncle and America’s sweetheart: they couldn’t be part of geopolitical shenanigans! Sadly, Hanks doesn’t have the touch of smarm and cocksure lightness with depth the part needs (Tom Cruise would have been better). Julia Roberts seems too wholesome for a sexual femme fatale (Michelle Pfeiffer would have been better).

Nichols does keep the pace up and his direction is assured and professional. But this is a strange and toothless film which, after the initial energy of Wilson managing to get the funding the Afghans need, has no idea where to go. So instead it slowly drains out to nothingness. A late scene as Gust explains the dangers of abandoning Afghanistan to the Taliban to Charlie (with the accompaniment of plane sounds on the soundtrack) hints at the film this could have been. But instead, this sticks for being a romp about how an unexpected hero changed the world. The fact it was partly for the worse doesn’t fit this narrative.