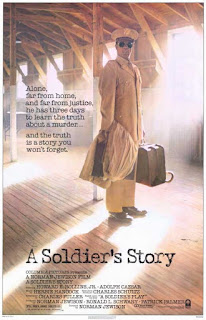 A Louisiana military base, 1944. A company of black soldiers prep for Europe to fight for Uncle Sam. All that is put on hold when hard taskmaster Vernon Waters (Adolph Caesar), their sergeant, is shot outside the base. Black JAG officer Captain Richard Davenport (Howard E Rollins Jnr) arrives to investigate the murder – to the hostility of his fellow officers, who are unused to saluting a black man as the common soldiers are. But is Waters murder the result of racism from the town? Or is it due to the tensions within the platoon?

Jewison’s adaptation of a notable stage success by Charles Fuller is a professionally mounted, sharp film – nominated for Best Picture in 1984, but largely forgotten since – that while never quite inspired, does provide plenty of insightful racial commentary on America. It never quite manages to come together as a film – and at times its pace is still better suited to the theatre than the movies –but it counterbalances this with its strength of good acting and an underplayed anger at divisions in America.

Racism is at the heart of the film. Many types of it. Jewison’s opening sequence – depicting Davenport’s arrival on the bus – provides us plenty of sightings of America’s apartheid, segregation being clearly visible in shops, benches and the bus itself. Davenport is addressed as “boy” and instinctive racial unease and disgust is in the eyes of every townsperson we meet. The officers range from paternalistic to patronisingly contemptuous of their men. Every element of the base is designed to remind the soldiers of their second-class status. Davenport is only with great reluctance allowed the trappings of his fellow officers. The film ends with a march of the soldiers towards war – a war they are volunteering to fight in, to protect a country that sees them as less-than-human.

But at its heart this is a film about the real insidious horror of racism. How it can turn someone against themselves. Because the real racial villain, it becomes clear, was actually Sergeant Walters himself. Played with a tightly-wound, self-loathing resentfulness by Adolph Caesar (repeating his stage role and Oscar nominated), Walters loathes the black men under his charge. He sees them as embodying the elements of black culture that (he believes) has led to them being treated so poorly by the whites. He hates their choices in music, in food, the way their talk. Most of all he hates the late Private CJ Memphis (Larry Riley), a good-natured, music-playing, sweet soldier who he believes embodies all the casualness and simplicity that he believes his people need to put them behind them to gain respect.

It’s Fuller’s brilliant insight that the most insidious thing about racism is that it is about creating barriers and hatreds – and it can lead to a black man loathing himself and his own people for not being white. Bad enough that the rest of society is against black people: worse that it is also secretly encouraging them to turn on each other. The tensions in the company all stem from Walters barely concealed unease at his colour, and his fury that his men don’t feel the same way.

Unwrapping in a series of flashbacks as Davenport investigates, the film reveals a fascinating series of tableau that demonstrates the confusion in Walters’ psyche and the impact it has on others. In a society where everything is all against them – as Jewison’s film is at pains to show – these are people who should be sticking together. Instead Walters crusade is to turn them against themselves and each other – to deny who they are in an attempt to become their oppressors. The quest for an acceptance that Walters eventually realises will never happen.

Because, as he bitterly states, no matter how much blood a black man sheds for America, no matter what sacrifices he makes – to many he will still be an “other”. Someone who the people of Louisiana are happy to have fight for them, but wouldn’t share a park bench with. These destructive attitudes are there as well in Davenport’s attempts to investigate, butting up against resentment from junior officers who can’t stomach being spoken to like this by a black man. Howard E Rollins Jnr plays the role with a terrific cool underneath which lies a tightly-controlled fury (he rather effectively channels Poitier in In the Heat of the Night).

A Soldier’s Story is crammed with some wonderful and challenging insights into race. It has a wonderful cast – Art Evans and a young Denzel Washington also stand-out – and a real sense of moral outrage at the evil of racism. What it sometimes lacks is the energy and dynamism the story needs to carry more immediate impact. Too often the film feels a little too safe, a little too conventional to really grip. It wraps up things with a rather conventional feel-good position (with Davenport and Dennis Lipscomb’s Captain Taylor coming to a soapy ‘mutual respect’ position). With the pace slightly off, it can drag at times. However, it’s insight can’t be doubted: it will certainly make you consider that the impact of racism can be even deeper and more damaging than the obvious, initial signs.