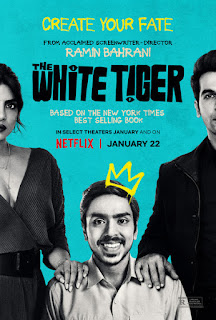 “India is two countries in one: an India of light, and an India of Darkness”. It’s an idea that’s at the heart of Aravind Adiga’s Booker-prize winning novel, adapted here as a dynamic (if slightly overlong) film by Ramin Bahrani. Those two India’s are rooted in the country’s deeply ingrained class differences, the new caste system being simple: the haves and the have nots.

Balram Halwai (Adarsh Gourav) is very much one of the have nots. A poor young man, who missed out on his chance of a scholarship because his family needed the income he could bring them from breaking up coal. Balram sees his way out through becoming a driver for the son of the local landlord, Ashok (Rajkummar Rao) and his American-Indian wife Pinky (Priyanka Chopra Jones). With the story being recounted by an older Balram, now a successful businessman, we know he finds a way to improve his life. But at what cost? And how many lives have been sacrificed to get him there?

Bahrani’s adaptation is a sharp, cinematic, electric piece of film-making, that makes superb use of montage and dynamic camerawork, particularly in its scene setting opening acts. Bahrani also engages brilliantly with the central themes of the novel, the all-pervading corruption of modern India (financial and spiritual) and the gulf in class and mindset that exists between the rich and poor. The wealthy upper classes see themselves as nothing less than masters of the rest of the population, who they hire and fire at will and frequently mistreat. Meanwhile, Balram argues, many of the poor cannot escape the mindset of servitude (the “chicken coop” as he puts it), unable to imagine any life other than living on the bottom rung.

It’s an idea Bahrani’s film brilliantly reinforces visually. The westernised wealth of the upper classes – living in gated communities and luxurious hotels, driving western cars with no contact with anyone outside other than servants – is contrasted with the slums and poverty of the rest of the population. Their parts of the city are run-down and crumbling. Many live on the streets. Balram himself lives on a mattress in the basement of his master’s hotel – while Ashok resides in a penthouse. You can’t escape the radical inequality – nor the violence (from slapping of servants to the implied threat of murder of your family if you step out of line) that keeps the system in place.

Part of the fascination of this film is wondering half the time, how much Balram is a willing participant in this system and how much he is longing to cast off its shackles. Sure we know, from the framing device of his later life, where he is heading. But is it his aim from the start? How genuine is his humbleness? As he schemes to have a rival driver dismissed, he talks in voiceover of his sadness – but on screen he merely shrugs and downs some sweetmeats. Does his resentment develop over the film, or is it there from the start – or does he only understand it as he realises he lives in a “chicken coop”?

As in the book its rife for interpretation – and Bahrani doesn’t lay on too think the unreliable narration element of Balram. It’s also helped immensely by Adarsh Gourav’s superb, BAFTA nominated performance in the lead role. He seems genuinely naïve and innocent – the very country pumpkin the other drivers at the hotel mock – but there is always an unknowable quality to him under the affable surface Gourav presents, a ruthlessness and also an anger. Watching both these qualities develop across the film – and questioning how well we know him – is a brilliant tight-rope walk, with Gourav maintaining our sympathies even as his actions become ever more ruthless.

He becomes an embodiment of the divide in India itself, between the mindset of being nothing more than a servant and the developing entrepreneurism in the country (represented both by the side jobs the rest of the drivers carry out as well as Balram’s later business success). It’s also fascinating to see the contrasts in his employers. Rajkummar Rao creates a character who is decent enough to know he’s treating people selfishly, while being lazy and immature enough to not bother to change. His wife, very well played by producer Priyanka Chopra Jones, speaks the language of a free America but is perfectly happy to force others to take the rap for her mistakes.

The film’s energy tails off in its second half as the plot catches up with the traffic accident that opens the film. The second half of the film tends to circle around the same issues of rich vs poor and the abuse of power that the first film explores with greater energy and wit. To be honest, you can tell an act of violence or betrayal is on the way – and the film takes too long to get there. A tighter film at an hour and 45 minutes would have been more effective and maintained the drive of the first half (even if it would have meant sacrificing some good individual scenes here and there).

But when the film is on song it works very well. The ideas it tackles around modern India feel very real and vital – and still carry plenty of relevance today. Bahrani balances the dark humour very well with the moral outrage and has a brilliant lead performance from Adarsh Gourav. It would have been better tighter which would have helped keep its pace and energy up, but this is still inventive and urgent film-making, a fine adaptation of an excellent novel.