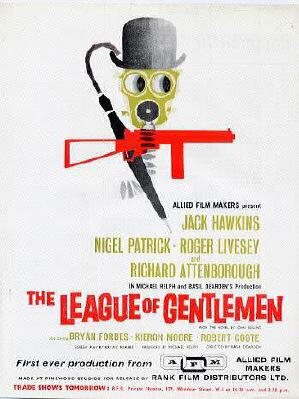 You throw a gentleman on the scrap heap at your peril. After a lifetime of service, Lt Colonel Norman Hyde (Jack Hawkins) has been made redundant – and, to put it bluntly, he’s pissed off. However, a gentleman doesn’t get mad, he gets even. And what better way to do that than using your army training to mastermind the finest bank heist Britain has ever seen? To pull it off, Hyde recruits a team of similarly disgruntled Army officers (all cashiered from the army for a range of offences, from theft to implied sexual demeanours) all of them highly trained specialists. What could possibly go wrong?

The League of Gentlemen was the first film from a short-lived British production company Allied Films. The company was a partnership between Dearden, Hawkins, Attenborough (who did a lot of the producing) and Forbes (who wrote the film’s witty, playful script). The film is a delight, a wonderfully executed heist movie, told with an archness that turns its criminals into sympathetic rogues. It’s really a sort of dry comedy and gets a lot of fun out of British attitudes at the time.

For starters, who would think that gentlemen like this (war heroes for goodness sake!) would ever be involved in anything so naughty as armed robbery? Especially in a country so deferential that – in a cunning raid to pinch guns from a military base – conman “Padre” (Roger Livesey, riffing delightfully on his Blimpish persona, as a conman with a shady past) simply turns up dressed as a superior officer and is instantly accepted as such. Just to complete the satire of prejudices at the time, the members of the team lifting the guns are ordered to speak with Irish accents as after all “We British never give the Irish the benefit of the doubt”, and even the a whiff of an Irish accent will whack the blame straight onto the IRA.

But this also a film having a bit of fun with demobilised fellows who have never quite found their place in civvie street – and may even miss the glamour and excitement of the war. Most of the team are clearly veterans of WW2, and many of them are struggling with demanding landlords, unfaithful wives or dismally dull jobs. How could they resist saddling up for one more grand adventure? Especially when there is a huge suitcase of money waiting for them at the end of it.

Dearden’s direction is taut, sharp but also gives more than enough room for the character comedy. He stages the heists with a briskness and efficiency that you can imagine Michael Mann being quite pleased with (the gas mask wearing, gun totting soldiers have more than a passing resemblance to the robbers in Heat – enough to make you think Mann may have watched this film somewhere along the line). Dearden’s storytelling is clear, well staged and inventive (the raid on the army base is shown to us without briefing, meaning we work out the plan as it progresses). He’s helped enormously by Bryan Forbes’ fun and quotable script, that swiftly but skilfully distinguishes the characteristics of each man and their motivations and makes a perfect balance between affectionate comedy and the sharpness of danger (the group make clear they will “do what’s necessary” if pushed, even if they aim is no bloodshed). The film is built around several wonderful set pieces – and has a classic, almost pre-James Bond parody opening as Hawkins emerges from a manhole cover dressed in a dinner suit and climbs into a car.

Hawkins is great here, spoofing the troubled war heroes and authority figures he spent his whole career playing. Here he inverts all this straight-shooting, “Queen and country first” attitude into a man with the outside trappings of decency, but with a bitter heart and cynicism towards the world. He carries most of the film with a deceptive effortlessness, but nails the tone exactly between fun and genuine frustration at the world.

The film is a delight, fun but with more than enough tension. It brilliantly captures a sense of the camaraderie and loyalty between these ex-soldiers, as well as their delight at being used able to use their skills one final time. It’s a film squarely on the side of these criminals thumbing their noses at the system (and who are planning as close as they can get to a victimless crime, albeit at gun point). The film has to give them some sort of comeuppance at the end – but you’ll be sorry to see it, as by then you’ll be invested at pulling off the heist as they are. Well directed, acted and written it’s a perfect entertainment.