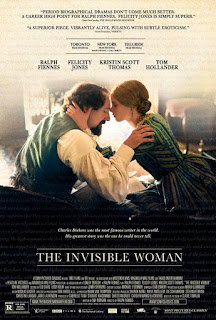 In 1865 Charles Dickens was involved in a train accident. While he worked tirelessly, tending to those caught up in the accident, he was also extremely careful to hide the fact he was travelling with a young actress called Nelly Ternan. Ms Ternan was his lover, had been for several years, and the couple were returning from Paris. Dickens managed to avoid the inquest and preserve the secret of his affair. Because, while he was happy to publicly announce his separation from his wife, the idea of the public hearing that he had an affair with someone 27 years younger than him was unthinkable.

The affair is deduced from careful deduction and the small remaining correspondence (both parties destroyed large numbers of letters) by the biographer Claire Tomlin. Her book forms the basis of Fiennes’ thoughtful, careful and intelligent film, with the director playing Dickens and Felicity Jones as Nelly Ternan. The Invisible Woman is restrained and unjudgmental film-making, that largely avoids obvious moral calls and weaves a beautifully constructed tale of two people who make themselves both happy and miserable.

And that misery is partly due to the times they live in. It’s an era of Victorian morals, where all that matters is the surface appearance and any real emotions underneath can go hang. But it’s also a world where very different rules apply to men and women. Dickens can leave his wife (in a press announcement) – but of course a woman could never do the same. It’s a world of strictly defined rules, with clear roles for both genders that cannot be deviated from. And it forces Nelly Ternan to travel to Paris, because the public shame that would come with her pregnancy by Dickens would destroy her. It’s why, years after Dicken’s death, she is lying about how well she knew the man (even changing her name and age to further distance herself) so that she can conform with the expectations of being a school-master’s wife (and ensure she will not be thrown out to the streets).

The rules are so strong that both Dickens and Ternan are as much in thrall to them as anyone else. Dickens is willing to bend the rules – but only so far. He would clearly never dream of living openly with his unmarried partner and their child as his friend Wilkie Collins (a perfectly cast Tom Hollander) would do. And Nelly Ternan is as outraged at this liaison – and as desperately uncomfortable in their home – as any prim housewife would be. In fact, in many ways, Nelly is even more conservative than Dickens.

But then she has to be. After all, he would be a rogue, she would be a whore. Choices aren’t great for women – and in her chosen career of actress, Nelly is clearly far more enthusiastic than she is talented. It’s worries about the career that leads to her mother – an excellent performance of motherly love mixed with a quiet understanding of the world from Kristin Scott Thomas – all but encouraging Dickens to seduce her daughter. Because, for an independently minded woman passionate about the art, if you can’t be an actress your other option is to be a muse.

Even Dickens seems quietly ashamed at his seduction of this woman, while she half-persuades herself it isn’t happening until it is. So, what draws them together? Refreshingly this isn’t a question of an older man excited by a younger woman – or a naïve woman swept up by a powerful man. Instead, these are kindred spirits. Both of them are passionate, intelligent and questioning. They both express an emotional honesty and openness. They have shared passions for literature, theatre and stories. It’s a romance that slowly blossoms and is based on a shared feeling. It would have been easier to tell a story of seduction and abuse – but this is a more intelligent film than that. At that fatal train accident, its Dickens who yearns to stay with Nelly and its Nelly that urges him to leave to preserve his secrets.

As these two, we have two actors with beautiful chemistry. Felicity Jones is inspired as Nelly Ternan. She both idolises Dickens, but is also drawn towards him on a very human level. She is astute, but conservative and at times even remote. Her older self, over a decade later, is both prickly and defensive – and those are qualities you can trace in her younger self, and not just because of her fear of disgrace. It’s a beautifully judged performance, both older than her time and also with a vibrancy and energy that entrances.

Fiennes, a more reserved actor, seems like an odd choice for the bon vivant Dickens – but he brilliantly excels in the role, full of energy and room-filling dominance. He marvellously conveys the charm and passion of Dickens, but also his thoughtlessness. This is after all a man who drops his wife by newspaper announcement and builds a barrier between their bedrooms. Who loves Nelly, but not enough to make her anything but a secret. Who is passionate and excited about his work, but can be turn distant and cool in his personal life. It’s a fabulous performance.

And the two leads are centred in a low-key, poetic film. You get the sense that there is a danger in getting to close to genius. Dicken’s wife Catherine – a beautifully sad and lonely performance from Joanna Scanlan – even warns Nelly about it (while delivering a gift from her husband, sent to her by mistake). It’s a danger that shapes Nelly’s whole life – but also her life is enriched by having Dickens in it. It’s a film that avoids obvious moral judgments – and while there are things done which cause pain, everyone is living in an imperfect society. Fiennes direction and use of visual language is wonderful and this is an impressive film.