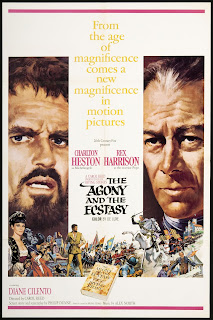 Call a film The Agony and the Ecstasy and you are tempting fate with the critics. Make your recurring dialogue phrase “When will you make an end?” and you are practically writing the negative headlines for them. Your enjoyment of The Agony and the Ecstasy is pretty going to be pretty much directly linked to your level of interest in Renaissance art, the Sistine Chapel and stodgy Hollywood epics. Don’t care for any of those? This probably isn’t the film for you. For me, I love the first two – and I have a terrible weak spot for the third. I know (trust me, I know) films like this aren’t that good really, but they go about their epic work with such earnestness that they always suck me in.

The film, an adaptation of a doorstop novel by Irving Stone, tells the story of Pope Julius II (Rex Harrison) commissioning Michelangelo (Charlton Heston) to paint the Sistine Chapel. It’s a job which Julius expects will be done and dusted in a couple of months: instead it takes almost four years (and that’s just the ceiling, the film doesn’t even cover the artist moving on to The Last Judgement!). Rejecting the original concept, Michelangelo decides to turn fresco painting on its head: and so one of the greatest masterpieces of all time is born.

The Agony and the Ecstasy lost a bucket load of money (despite this is hoovered up five Oscar nominations, most of which focused on its strengths, above all, it’s 1:1 recreation of the Sistine Chapel which is progressively covered in paint as the film progresses). It more often than not tips somewhere between documentary and reverence of God, the Church, the Artist or all three at once. The first 12 minutes of the film is literally a documentary, a run-down of the artist’s career with mid-Atlantic voice-over and reverential visual slide-show of the artist’s greatest hits.

Once the action starts, all too often the film heads into “men in tights” territory, a stilted, personality-free Hollywood version of the Renaissance, all primary colours and dubbed European actors. Directing, with a smooth emptiness, is Carol Reed. Remember when Reed made films like The Third Man and Odd Man Out? How could the man who made films as original and dynamic as those close out his career making such middle-of-the-road fare as this and Oscar-winner Oliver? Reed delivers by-the-numbers. From swelling chords of Alex North’s well-judged score at our first sight of the interior of the (unpainted) Sistine chapel to the pristine pictorial pleasantry of the marble quarry Michelangelo retreats to, there is not a single unique or interesting shot in the film.

The closest the film gets to visual dynamism is the half-way point as Michelangelo heads to the mountains for inspiration, to see the clouds form themselves into (what we recognise as) the Creation fresco from the chapel. But then perhaps Reed reckoned he couldn’t bring us anything as visually striking as the ceiling (and to be fair who can?). So, the film doesn’t compete.

Instead it settles down into demonstrating the mechanics of how the ceiling is completed. While you could get a good dig in here that we see a real time painting of the ceiling, in fact I felt this demonstration of how you go about transferring a design to a ceiling was fascinating. Certainly, you can see why it takes a burden on Michelangelo. The film builds some nominal drama about whether it will ever be finished: but since it’s clear Julius (who at times is a bit of a “why I oughta…” boss, frustrated but amused by a protégé’s shenanigans) and Michelangelo (tempestuous of course, as artists are) have no intention of not finishing it, it’s pretty manufactured. But it doesn't matter because this is really a story of the glory of fine art - and the burdens of its creation. And on that score it's very successful and, for all its earnestness, very effective. 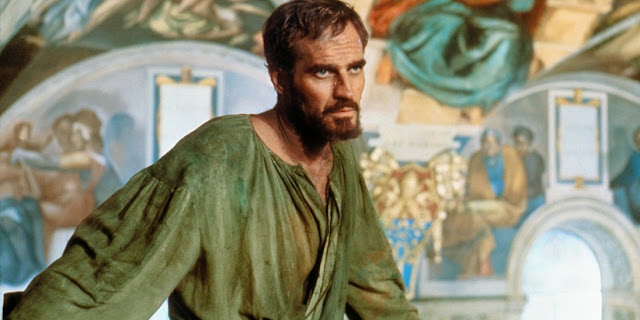 Charlton Heston gives a fine performance as the great artist. While there is no hint of Michelangelo’s probable sexual flexibility – Heston claims to have done his research and decided there was no way any of that was going on in the artist’s life – we do get a lot of his prickly bitterness (his surviving correspondence is a never ending stream of bitching about money and barely a mention of art theory, a sign if ever I saw one that great artist’s need to balance the books like the rest of us). Heston’s grandness may seem at time like he is as carved out of marble as the subject’s work (after all this is the actor cast as Moses based on his physical similarity to Michelangelo’s carving), but he does convince.

Rex Harrison has the juicier part as the war-like Pope, the Prince of both the Church and Realpolitik. Harrison famously declined to grow the beard that Julius was famed for, but he captures the brusque playfulness of this man who remodelled the Papacy as a political force. His scenes carry energy and wit in a way most of the rest of the film lacks.

Overall though the film, I am well aware, is (ironically) as slow as watching paint dry. But yet, it pushes my buttons and I rather like it. Again, it’s probably a bias coming into it. And I forgive it a lot for a beautifully judged and played scene where Julius and Michelangelo study the creation fresco and its meanings for faith. It’s wonderfully written and played and carries a profound spiritual intellect. This is when the film comes to life - it's gives serious space to proper discussions on questions of art and faith, which is often rewarding.

Sure, it sits within a film that is often dry and old-fashioned. But when it zeroes in on the painting itself: how it came about, its inspiration and its meaning – it carries a real impact. It’s a flawed film: but I find myself with a very soft spot for it.