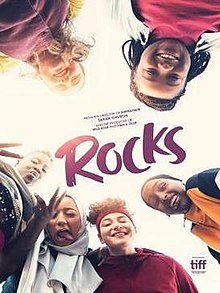 It may have surprised people when Rocks emerged as the most nominated film at the BAFTA Awards for 2020. It really shouldn’t, as this independent film is not only rich, expressive and humanitarian film-making, it’s also a deeply heartfelt and emotional insight into overlooked lives in Britain, made with an expressive skill and richness.

Set in an inner-London school, the film follows Rocks (Bukky Bakray), a black teenage girl, left caring for her young brother Emmanuel (D’angelou Osei Kissiedu) after her mother walks out on them (leaving just a note and small envelope of cash). Terrified of being taken in and separated by social services, Rocks struggles to cope with the pressures forced upon her.

It’s a simple plot – and could have been told with a Loachesque bleakness, like a modern-day Cathy Come Home. Instead though Gavon and writers Theresa Ikoko and Claire Wilson frame a story that could have been misery with warmth, love and hope. The film’s essential optimism and faith in the goodness of people makes it – for all the heart-breaking sadness it includes – a far more involving and moving film than a social lecture would have been.

It also treats its teenage characters not as future tearaways, thoughtless millennials or shallow bullies. Instead they feel like real, breathing and genuine people, capable of moments of thoughtlessness but still fundamentally decent. Rocks’ best friend Sumaya (Kosar Ali, who is brilliant) is desperate to help her friend – and, for all the tears Rocks jealousy of her settled family causes, persists in being loyal and mature to the end. Even the disastrous mistake caused by Rocks’ friend Agnes comes only from an overwhelming desire to help. What also makes this film feel optimistic and real is that these disagreements are resolved with a mature kindness and emotional intelligence we could all learn from.

At the centre of is Rocks herself, played with an astonishingly naturalness and emotional rawness by Bukky Bakray. Rocks is a child forced to become an adult too early – eventually dragging Emmanuel around streets, from house to house and pretending she is his mother to book rooms in a hotel – all the time terrified to let her situation become known to social services. Rocks doesn’t have much in her life – a deceased father, a useless mother – and the thought of losing what family she has left is agonising to her. It’s what lies behind her bitter, subconscious, envy and rage at seeing the large and supportive family Sumaya has. It’s everything she has ever wanted but never had.

The only place where she can truly relax and be a child is at school. There she is free for a while of the pressures of home and caring for her brother. Gavron’s film shows an extraordinarily refreshing look at inner-city school life. These are kids who may behave ‘badly’ at points (but boisterous more than anything, captured in a food fight that breaks out in a cooking class), but they are passionate, engaged and ambitious. They have genuine dreams for the future – lawyer, businessmen, make-up artist are all careers mentioned – they seize with fascination on a lesson taught about Picasso. Far from the cliché of drifters, the film shows a world of teenagers full of passion, interest and talent – some of which, you fear, may never be truly tapped into.

It makes a real contrast with the harried doubts and concerns Rocks has to deal with in the ‘adult’ world. Her situation drives her to theft, lying and puts divides between her and her friends, who she seems unable to really open herself up to and ask for help. Her anxiety is picked up on by her adorable brother Emmanuel (D’angelou Osei Kissiedu gives a phenomenal performance of warmth, cheek and later devastating fear), who makes it his mission to cheer her up: a scene in a hotel where his simple, gentle attempts to comfort her and make her laugh are tear-inducingly endearing.

It’s all part of the winning humanity at the heart of the film. There are mistakes made in this film by its characters, forced separations and painful arguments. But, where other films would have used this as a bitter spiral to hammer home a depressing message about the bleakness of the world (and by implication of communities like this), this film remains optimistic. Despite everything, it ends with an image of a group of friends laughing and playing on a beach – they’ve feuded but have an emotional maturity to forgive adults could do with. It’s part of the fundamentally positive outlook.

The film even manages to not demonise social services in the way so many similar films do. Truth be told its clear Rocks can’t cope with these pressures – her friends know it even she and Emmanuel know it. The contrast between the girl we see in the opening moments and the increasingly insular and harassed figure she becomes is striking. Social services are genuinely concerned people – who are right to be concerned. The eventual resolution is remarkable for its normality and even touches of positivity and hope for a new beginning. It’s a film that explores the life of the less well off in the inner-city without preaching at or depressing us.

And that optimism is its greatest strength, as it allows us to see people rather than social issues. It’s an agenda-free film that simply tries to tell a human story – and, with the energy and passion its shot with, immerses us in the lives of a group of people many of us would walk past without thinking about. Rocks is about a world where people want to rally round and help, where hope and new beginnings can be found in any situation. It doesn’t shy away from moments of pain – and there are moments here that will break your heart – but it never loses its optimism and humanity.