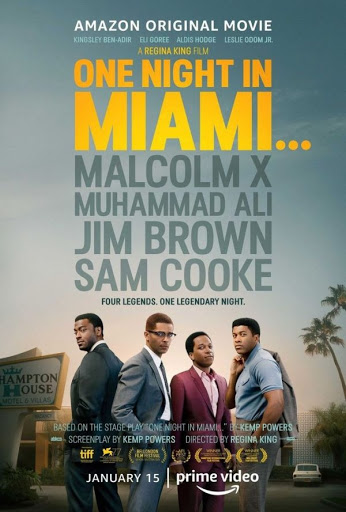 One night In Miami in 1964… civil rights activist Malcolm X (Kingsley Ben-Adir), NFL super-star Jim Brown (Aldris Hodge), “King of Soul” Sam Cooke (Leslie Odom Jnr) and world heavy-weight champion of the world Cassius Clay (Eli Goree) all gathered in a motel room overnight. We’ll never know what they talked about: but playwright Kemp Powers imagined what might have gone down in that room in a play, which forms the basis of Regina King’s film directing debut.

What do they talk about? Along with some home truths, it’s mostly the state of America and the struggle for racial justice. Malcolm X – edgy and worried for his life – feels singer and businessman Sam Cooke has sold out by pandering to white audiences. Cooke angrily argues that building his own record label for himself and his black artists is beating the white man at his own game. Cassius is having last-minute doubts about converting to Islam. Jim Brown is pondering switching from sport to film-making: after all, what are he and Clay really but “gladiators”?

King’s film is passionate and directed with confidence, even if the film never really escapes from its heritage as a single-setting, one-act play. The action largely takes place in a single room – despite efforts to open it up by having our heroes visit the roof or pop out for supplies. It’s not a surprise that the best moments are also the most theatrical, not least the heated debates that allow the actors to shine.

These debates are so strong, I wish there were more of them. The heart of the film is that argument about the balance between pandering and creating something that will sell. Sam Cooke has had a lot of success – but is it at the cost of not singing about the things he really cares about? Or is he right that people like The Rolling Stones will always open doors he can’t – and if he and other artists can make fortunes from the Stones covering their songs, isn’t that a win for the black community? Malcolm X has no time for that possibility, accusing Cooke of a soft-pedal Uncle-Tomism, content to leave the sort of impassioned protest songs he could be singing to men like Bob Dylan.

Both Brown and Clay are largely left to play peacemaker and devil’s advocate. Hugely successful athletes, they balance justifiable pride with a determination to be their own men. But the film fails to really explore issues in their industries – is their success elevating their community, or just enriching rich white guys? It would have been interesting for Malcolm to turn some his fire on these two. After all an early scene with Brown shockingly demonstrates the limits of sporting success to truly change the opinions of some white Americans about their black neighbours. There would certainly have been plenty for him and Malcolm X to get into in a debate about the right way to progress civil rights. But it never quite happens.

Not that the film is afraid to turn some of its guns on Malcolm X. Kingsley Ben-Adir excels playing a far more fragile, anxious and gentler Malcolm than we expect (after all, it’s so hard not to immediately think of Denzel Washington). This is a Malcolm worried for his and his family’s safety, going through the turmoil of leaving the State of Islam and not sure where his life is heading, other than the fear it won’t be a long journey. Ben-Adir has the fire and passion, but also the nervous sense of being the youngest, least well-known (at the time) of the four, and he creates a successful ambiguity as to whether his friendship with Clay is at least partly based on self-interest.

There is some seriously rich material in this film for the four actors to sink their teeth into, and King’s direction allows each of them a showpiece, while expertly shuffling perspectives. Odom Jnr is superb – not least for his heart-rending and emotional performances of several Cooke songs – as a man who knows deep-down there’s truth to what he’s being accused of, while feeling his shared success is part of doing “his bit” and he’s being unfairly picked on.

Aldis Hodge’s Jim Brown is the most settled and content of the four, certain of his own destiny and comfortable with his life. In the hands of a lesser actor, his role could be potentially overlooked, but Hodge’s charisma keeps his careful performance compelling. Eli Goree perfectly captures Muhammad Ali’s exuberance, good-natured arrogance and restless energy and mixes it in with a sweet desire for everyone to get along. All four of these actors riff brilliantly off each other.

The film doesn’t let us forget the dangers of the time either. The opening sequence demonstrates the dangers and prejudices all of them face: from booing crowds to threats of physical harm. It’s something we return to time and time again – while Malcolm X’s fear about shadowy figures watching him is a constant reminder that his own death is so close.

But I feel there could have been more. Sam Cooke would also be dead by the end of 1964 – but you could watch this film and not have a clue that within 18 months half the people in it would be murdered. Away from the debates, the film takes a while to get going, and there gaps in issues of racial politics that you feel could have been richly explored.

For all that the film could have been a moment of time, it actually feels a bit disconnected from the rest of history. Where does this event – and the insights we gain about our characters – fit within the perspective of civil rights for the rest of the 1960s, let alone the rest of the century? The film doesn’t quite capture this. More ambition to expand the play beyond that one night into something more far-reaching (imagine what Spike Lee might have made of it) would have been fascinating. As it is, this is a brilliantly acted, well-made film – but still feels like an adaptation of a night at the theatre, a more reassuring rather than challenging film.