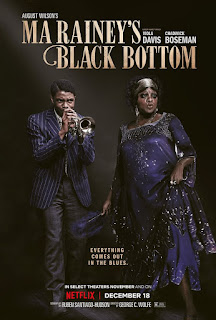 In a Chicago recording studio in July 1927, while the sun beats down outside, blues singer Ma Rainey (Viola Davis) is due to record some of her greatest hits. But she’s almost an hour late. The people who made it on time are her backing jazz band. Cutler (Colman Domingo), Toledo (Glynn Turman) and Slow Drag (Michael Potts) are seasoned pros. But trumpet player Levee Green (Chadwick Boseman) is something else, an ambitious and electric young man who feels he knows what the new sound is in a way that Ma doesn’t. Over an afternoon, as Ma flexes her power upstairs, the white agent and recording studio owner fret, and tensions between the band members slowly simmer towards and explosion.

It’s impossible to watch Ma Rainey’s Black Bottom right now without being very aware of the tragic early death of Chadwick Boseman. Boseman passed away while the film was in post-production, and it’s hard not to guiltily wonder if Boseman was aware this was to be his final performance. Either way, this was a stunning way for this electric, James Dean-like talent to sign off – a scintillating, passionate performance as a man carrying huge burdens and deeply repressed griefs and guilt. August Wilson’s play provides several key set-piece speeches for Levee – and Boseman burns through them with an intensity that will leave its mark on you.

Bright-eyed, with a wiry body of elastic tension that shifts from loose, jazzy movements to rigid bursts of fury, Boseman is extraordinary. Starting the film as seemingly an irresponsible, easy-going young man frustrated at the concessions of his elders, Boseman establishes a deep psychological pain at his core. He’s a young man who has seen his parents vilely mistreated by oppressive white men, who smiles to get what he wants but never forgets that the white bosses he works with see him as little better than a slave, ripe for exploiting. It’s a brilliant performance, one for the ages.

It dominates a film that is told with dynamism but never escapes its theatrical roots. Its set-piece speeches are virtuoso moments for the actors, but the silent observance with which they are watched by other actors feels more suited to theatre rather than the realism of film. The build towards the film’s tragic end, hinging on a moment of violence, is the sort of character breakdown that we accept in the theatre, but seems forced on film – especially when met with the sort of visual tableaux that seems to invite the curtain to come down. Wolfe directs what is very much a conversation piece in two locations with a great deal of energy and imagination – but it remains very much a theatrical venture at heart, where long speeches and elements of Greek tragedy (hubris, nemesis and character flaws) shape the plot.

But it doesn’t altogether matter when the ideas the film tackles are so vibrant and presented with such passion. It’s a film that sharply outlines the racial divide in America. Wilson’s play is all about how master/servant exploitation continues in America. Its early shots establish the only work black people in Chicago can find (all of it manual or secretarial), while the musicians are paid cash-in-hand, even Ma, because no bank will believe a black man hasn’t stolen a cheque. 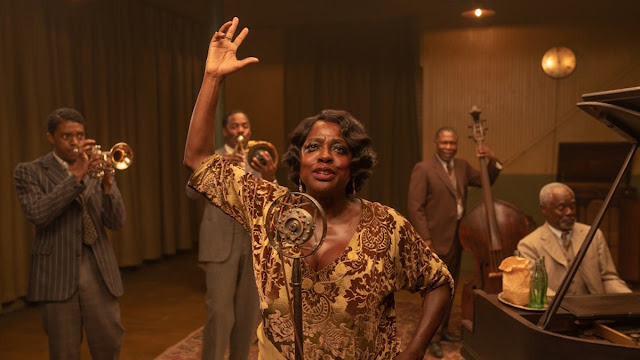 "All they want is my voice” says Ma, and she’s right. A difficult prima-donna, unafraid of expressing her desires both musical and sexual, Davis is larger-than-life but impressive as the domineering Ma. But Ma behaves badly because it’s the only way she has of exerting some control in this environment. She won’t see the profits from this recording work (it will be the white men running the studio). So, just for a few hours, she wants to remind them that they rely on her. So, she’ll be late. She’ll demand a cold coke. And she’ll insist her stammering nephew speaks the opening monologue of the song, even if that does mean burning through several recording albums to get it right. Because Ma may be an artist, but she’s also a tool to these people – something they will use while she can earn them money, and will then cast aside the second she is done.

It’s the same with the band. And the older hands have accepted it. Sure, they have their resentments and their sadnesses – old pro Toledo even remembers when he had the fire like Levee has – but they understand the game. They are props in the white man’s game, and they are content to earn a decent living from something they like doing, knowing that they are still living a better life than many. Cutler even has his faith to bolster him, a faith Leveee rejects in Boseman’s most electric scene, with a speech that angrily denounces God for his unfairness towards black people.

Levee is another thing again to the rest of them. He has plans and ambitions and wants to form his own band. He’s written his own songs, which have far more of the zip that we know jazz is heading towards. He’ll play nice to get what he wants, but he’s not willing for a second to forget how racist the world is. And he won’t let go of his anger for a moment. Compromise for him only serves a purpose. His youthful defiance and lack of deference spark resentment in the others – who either can’t or won’t understand him – and even Ma, perhaps seeing him as a threat, can’t stand him.

It of course leads to tragedy – and a coda that grimly reminds us all that in this world there may be winners but the thing that unites them all is that they are white. Jazz music may be on the cusp of change – and Ma will pay that price in a few years – but America isn’t. You only need to look at how the musicians are treated to know that equality is a million miles away.

The cast are faultless. Turman carries a quiet sadness and resignation as the ageing Toledo. Colman Domingo is relaxed then taut as Cutler. Taylor Paige has a dangerously selfish energy as Ma’s younger lover Dussie. But it’s still more of a play than a film, even if it is told with pace and energy, acted with such flourish and passion. It leaves you with effective and engaging arguments, but it still feels like it work best in the theatre.