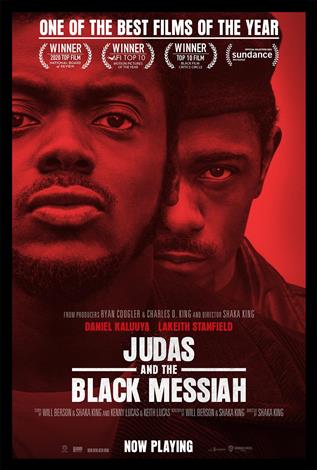 In the 1960s, America was in violent turmoil. Simmering racial tensions were exploding, as a younger, politically engaged generation refused to accept the status quo of the past. Facing them was a reactionary, institutionally racist law and order system, determined to take any steps necessary to stop them. Violence was inevitable and the anger and resentments of that time still carry a powerful legacy today. It’s these emotions that Judas and the Black Messiah engages with. Impassioned and ambitious film-making, it often tries to do too much but still leaves a powerful impression.

In Chicago in 1968, Bill O’Neal (Lakeith Stanfield) is a car thief and conman, who uses a faked FBI badge to steal cars. Arrested (and beaten), he is given a choice by FBI Agent Roy Mitchell (Jesse Plemons) – serve time for his offences or turn informant for the FBI. O’Neal is ordered to join the Black Panther Party – and to get as close as he can to the charismatic leader of the Illinois chapter, Fred Hampton (Daniel Kaluuya). Hampton is radical, but also a visionary leader who is attempting to build a “rainbow coalition” that will unite black, Puerto Rican and white working classes to campaign on a wide range of social issues, from race to healthcare and education: a vision the FBI sees as a nightmare. O’Neal’s information is used to help frame Hampton, as events build inexorably towards his permanent removal.

Judas and the Black Messiah is dynamic and electric film-making. Shaka King’s film hums with righteous fury at the hypocrisy, racism and violence of the law enforcement agencies towards the Chicago black community (effectively the police are an occupying force, perpetrating violence and injustice). While not shying away from the violent response from many of the Black Panthers – including showing one white police officer executed while begging for his life – it paints an unsparing picture of the racism and cruelty of the Chicago police. Innocent black people are bludgeoned and abused. Those in the Black Panthers are framed for crimes, brutalised in prison and murdered in police custody. The outrage and fury of the film is both justified and affecting.

Simultaneously there is a powerful sense of grief at the loss of a golden opportunity – and the inspiration of a visionary leader, who could have grown to become a key figure in American history. King’s film explores the all-too-short life of Hampton before his murder. It delicately paints his charisma but also carefully establishes his vision. His recognition that social, educational and medical improvements are at least as important to ordinary black people as political rights. His attempt to build a coalition of the downtrodden, white and black. His status as the only man who could unite this coalition. His loss an incalculable tragedy for his cause and also for America.

This powerful picture is further framed by Kaluuya’s marvellous performance as Hampton. Kaluuya perfectly captures the charisma and electricity of Hampton’s public speaking, his ability to marshal words and move crowds. With a bulked-up physicality and head-cocking defiance, he wonderfully conveys Hampton’s ability to persuade and inspire, his lack of fear and passion to see justice done. But Kaluuya also makes him wonderfully human. In intimate moments with his girlfriend Deborah (very well played by Dominique Fishback), Kaluuya makes Hampton gentle, shy, even a little nervous – giving him a very real emotional hinterland that sits naturally alongside (and contrasts with) his activist public persona. This is a stunningly good performance.

It also, perhaps, unbalances the film slightly. King’s film is ambitious – but it is attempting to do too much within its two-hour runtime. This is a film that wants to explore the corruption of the law forces, the terrible plight of black Americans, the life of Fred Hampton and the story of his betrayer Bill O’Neal. It’s this final story that actually ends up feeling the least defined – and least engaging – of the film’s plot threads (unfortunate as it’s the one that gives the film its title).

None of this is the fault of Lakeith Stanfield, who gives a marvellous performance of weakness, fear, self-preservation and regretful self-loathing as O’Neal. But his relationship with Hampton never feels close or personal enough. In fact, the two of them feel very distanced from each other. The sense of the personal in the betrayal is lost. The idea of O’Neal struggling between loyalty to Hampton and his FBI handler Mitchell (who encourages O’Neal to see him as a sort of surrogate father) is weak, because we never get a real sense of a very personal link between O’Neal and Hampton, or a real sense that O’Neal is deeply conflicted about his betrayal. (Indeed, the film is reduced to explicitly telling us that O’Neal is struggling between betraying the Black Panthers and a true belief in their cause, which feels like a failure of narrative.)

Fundamentally, you could split the film into two movies. One which focuses on Hampton and in which O’Neal is little more than an extra. And another that zeroes in on O’Neal’s struggle with the FBI and fears of being caught, in which Hampton is a distant, inspirational figure. What King’s film fails to do is effectively is bring these two characters together properly. The personal nature of the relationship (and the betrayal) is lost. This isn’t Jesus betrayed by one of his disciples – more like Jesus being cashed in by someone at the temple. It’s a loss to the film.

It feels at times as if O’Neal was the original “hook” but that King became more interested – perhaps rightly – in Hampton and the tensions in Chicago (and America more widely) at the time. Similarly, the film is fascinated by the corruption of the FBI – Martin Sheen makes a chilling, latex covered, appearance as Hoover – and by questions over how far Mitchell (Plemons, decent bur fatally compromised), a relative liberal, is willing to go. In both plot lines, O’Neal is an entry point but becomes less and less the focus. It partly explains perhaps why Stanfield – clearly the “lead” – ended up joining Kaluuya in the supporting actor category at the Oscars. He may well be the lead but his story is the least compelling of the several threads here.

Judas and the Black Messiah is still hugely effective in many places. Its main weakness is in trying to juggle these various plot threads, and not always succeeding in bringing them together as well as it should. Because the O’Neal plot line needs to take up a good share of the run time – but is the thread the film seems least interested in – it does mean some of these scenes drag more than they should, making the film at times seem longer than it should. You can’t help but a feel a film that focused on Hampton alone would have been stronger. King’s film still makes powerful points – but its ideas are sometimes blunted and crowded out by its attempt to cover so much. Impassioned and ambitious, it doesn’t always completely succeed.