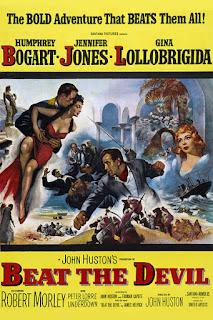 Beat the Devil is a curious beast. You could argue it was ahead of its time. Huston and Bogart had started out with the intention of making a straight crime mystery, a sort of Maltese Falcon in Europe. But when they arrived on location, obviously something in the weather got to them and Truman Capote flown in to help redraft the script on a daily basis to turn it into a sort of satirical comedy. For audiences expecting a hard-boiled crime mystery, it left heads scratched and cinema seats empty. Bogart lost a packet on the film – and later claimed to hate it – and it only existed in a badly cut-about version until it was restored in 2016.

The slightly surreal plot hardly really matters. A crowd of unusual people gather in a run-down port in a small Italian town, waiting to take the ship to East Africa. Gwendolen (Jennifer Jones) and Harry Chelm (Edward Underdown) are seemingly upper-class Brits (or are they?). American Billy Dannreuther (Humphrey Bogart) and his European wife Maria (Gina Lollobrigida) might also once have been something, but they sure ain’t now. Peterson (Robert Morley) and his associates the suspiciously un-Irish Julius O’Hara (Peter Lorre), rat-faced bully Major Jack Ross (Ivor Barnard) and nervous Ravello (Marco Tulli) are almost certainly all criminals on their way to a big score in Africa. Thrown together, this unlikely grouping end-up in a heady cocktail of betrayals, schemes, affairs and lies that spools out like a demented shaggy-dog story.

Beat the Devil is really more of an experience, a series of gags and light-hearted scenes played with a grin and a wink. Nothing in it is meant to be taken seriously, and this semi-surreal group of events becomes ever more absurd as it goes on. By the time the cast are abandoning a sinking ship, trudging up a beach to be captured by Arab officials who eventually allow them to row back to port where they find their ship didn’t actually sink…you really should just decide to go with the flow.

Instead the film is about shuffling up familiar tropes from hard-boiled noir with Oscar Wildeish farce. Certainly the Chelms seem to have wandered in from something totally different (not least since Gwendolen’s name is reminiscent of Importance of Being Earnest). Harry (a superbly stiff-upper lipped Edward Underdown) is a blithely unaware would-be English gentleman, pompously aware of his social class and blithely unaware that his wife seems to immediately start an affair with Billy. Gwendolen is the exact sort of character you might expect to see in Wilde, a dreamer tipping into fantasist, who blurts out things she shouldn’t and falls instantly in love with Billy. She’s also whipper-smart – more than capable of defeating Harry at chess without looking (“usually he’s a wonderful loser” she tells Billy, by way of apology for Harry’s strop).

Billy and Gwendolen embark on an immediate affair (although of course, in deference to the Hays Code, its just kept this-side-of-implicit). Mind you the film has a zingy wife-swop feel to it, since it’s pretty clear that Maria is far more interested in the British reserve of Harry (“Emotionally I’m English” she says before eulogising tea and crumpets) than she is in the ordinary-Joe cunning of her husband (although perhaps Harry is just as oblivious to this as everything else around him).

Billy is Bogart deliberately at his most Bogart-ish, channelling every grimy-but-smart dubious-hero the star ever played. Bogart plays the entire film with a grin on his face and delights in lines like “Fat Guys my best friend, and I will not betray him cheaply”. He also sparks delightfully with Jennifer Jones, who seems to having the time of her life as a character so flighty and unpredictable that even she looks like she hasn’t a clue what she is going to do (or feel) from one moment to the next.

The supporting cast of creeps and freaks Dannreuther is conspiring with to make a fortune (its something to do with land and uranium) similarly seem to have walked in from a side-ways Dashiel Hammett universe. For all their dirty deeds – and it seems Petersen had ordered a hit in the UK, although never for a minute would you believe this looking at Robert Morley’s puffed up bluster – they are a rather sweetly naïve and incompetent. Morley’s Petersen, a sort of galloping major, carries no real threat. Peter Lorre is very funny as a suspiciously German sounding Irishman (“Many Germans in Chile have come to be called O’Hara” he comments), prone to flights of verbal fancy and a chronic lack of focus. Ivor Barnard is as close as the film comes to threat as the aggressively incompetent Major Ross, a chippy bully who resents his shortness and eulogises Hitler at the drop of a hat. These heavies are each ridiculous figures.

And it makes sense, since the plot is a great inflated balloon of nonsense. There are chases, sinking ships that stay unsunk, a moment where two major characters are briefly believed dead, obsessive conversations about hot water bottles and reveals that puncture any sense of grandeur for each character. It’s the sort of aimless story you could imagine natural raconteurs like Huston and Capote finding absolutely delightful, and the whole film feels like a dramatization of a dinner-table anecdote.

Take it on those terms and its all rather good fun, even if it makes no sense. The cast look like they are having a whale of a time, and the total lack of seriousness about the whole enterprise generally makes it glide by with ease. Take a couple of drinks, sit back, don’t think about it too much and enjoy the jokes.