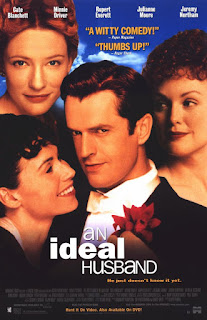 I have a theory that Shakespearean comedy rarely translates well to screen because what makes it work is its theatricality and how it encourages laughter by interacting directly with the audience. I think you could say the same for Oscar Wilde. Certainly, this film version of An Ideal Husband looks lovely and never misses a single Wildean bon-mot. But it’s overlong, drags rather in its final third and, above all, isn’t particularly funny.

The plot has been freshened up and adjusted in places to make for a more filmic narrative, but the principles are the same from the play. Sir Robert Chiltern (Jeremy Northam) is a pillar of the establishment, famed for his unshakeable dedication to principle and adored by his wife Lady Gertrude (Cate Blanchett) who sees him as a paragon. But all that could be shaken up when Mrs Laura Cheveley (Julianne Moore) re-enters his life, bringing with her shocking revelations that could destroy Sir Robert. So he turns to help to his best friend, the witty and debonair Lord Arthur Goring (Rupert Everett), who is himself in love with Sir Robert’s sister Mabel (Minnie Driver). How will events play out as they start to spiral out of control?

Oliver Parker’s film is cautious, safe and – for all that it tries to open the play out with scenes in parks and Parliament – conservative and safe. You can imagine Wilde himself would probably have wanted something a little more daring had he been involved. As it is, things that work very well on stage (the farcical elements of mistaken identity and a house with a different character hiding behind every door) don’t really work on film. These ideas are inherently theatrical and depend on the heightened unreality of theatre – in the cold hard harshness of cinema, they feel out of place.

Put frankly, the big thing the play misses is the live audience. You can imagine this cast going down an absolute storm in the West End. The lines that demand a wink to the audience, bits of business that invite laughter, just fall flat here. They are rendered lifeless by the demands of being fit into a film, or having to take place in a world that seems real, when Wilde’s plays are all about a sort of bizarre ultra-Victorian world of form covering up a suggestive naughtiness. When the characters go and watch The Importance of Being Earnest at the theatre (a sign of the film’s clumsy opening out, and its lack of wit when left to its own devices) the dialogue style that doesn’t really work in the “real world” of film suddenly feels perfectly natural when we see people speak it on stage.

Parker’s film fails to bring any particular inspiration to events. Instead it seems determined to package Wilde as a heritage product, the sort of thing you can imagine people considering a safe thing for the whole family to sit down and watch. There is no sense of cheek, sex or danger in this like you can get in Wilde. Instead it’s all about attractive actors in period-drama drawing rooms, going about their work with skill. All made to look as pretty as possible with some lovely costumes. It’s Sunday tea-time viewing.

But despite this, some of those performances are spot on. I’m not sure there is an actor alive today better suited to Wilde than Rupert Everett. His imperious drawl, his sardonic wit, his louche manner (not to mention his ability to suggest an illicit wickedness under the surface) make him absolutely perfect. Everett has shown time and again – on film and in the theatre – he has an affinity for the dryness needed for Wilde, as well as being able to communicate the intelligence without smugness. All the successful scenes of the movie revolve around him, and he invariably brings out the best from his co-stars. He’s also far-and-away the funniest thing in the film.

The rest of the cast are more mixed. Cate Blanchett is the stand-out in (sadly) the least interesting main role, the rather stuffy Lady Gertrude (you wish you’d been able to see her let rip as the more wicked Mrs Cheveley) – like Everett she “gets it”. Jeremy Northam also does excellent work in the straight-man role of Sir Robert, but his characteristic dignity and intelligence do very well in the role. Julianne Moore though seems oddly constrained by the period setting as Mrs Cheveley (strange that she did this at the same time as her superior work as a restrained Englishwoman in The End of the Affair) while Minnie Driver lacks impact as Mabel. John Wood and Peter Vaughan – two old pros from the theatre – bring much of the energy and wit in supporting roles.

An Ideal Husband is fine. But watching it you’d wonder what all the fuss about Wilde is about. And that can’t be a good thing. If Wilde wrote a review of it, it would be funnier than anything in the film.