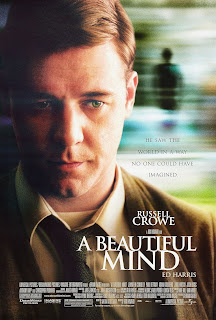 There is nothing Hollywood likes more than a man overcoming adversity. Make him a troubled genius and that’s even better. Throw in a supportive wife who bends over backwards to help him and you’ve got the dream Hollywood scenario. You can bet Oscars will follow – and they certainly did for Ron Howard’s A Beautiful Mind, which hoovered up Best Picture, Best Director, Best Adapted Screenplay and Best Supporting Actress (it probably would have also nabbed Best Actor if Russell Crowe’s personal behaviour hadn’t turned him from idol to Hollywood’s most unpopular actor).

The film is a romantically repackaged biography of John Nash (Russell Crowe), a pioneering mathematician whose life was turned upside down by his diagnosis with schizophrenia in the 1960s. Even before then, Nash had become increasingly preoccupied by delusions and fantasies, many of them revolving around “secret government code-breaking work” for a bullying CIA Agent (Ed Harris). Slowly coming to terms with his diagnosis, with the help of his loving wife Alicia (Jennifer Connelly), Nash must learn to put aside the things he knows he are not real, while trying to rebuild his life.

Ron Howard’s film is assembled with his usual assured professionalism. It is never anything less than effective, what it never quite manages to be is inspired. Perhaps because it’s a very standard Hollywood biopic. It effectively presents the life of its troubled genius as something very easily digestible, hitting all the beats of suffering, determination and eventual triumph you could expect when the film starts.

This makes for exactly the sort of middle-brow filmmaking made with absolute professionalism that, if you turn your head and squint a bit, can be made to look like Oscar-winning art. That seems incredibly harsh on the film: but there is really nothing particularly “new” about anything here: in many ways, it could have been made almost exactly the same in the 1940s (and it would probably have won an Oscar then as well).

That’s not to say it’s a bad film. Howard’s direction is sharp and exact, and he stages the film very well, drawing very good performances out of the cast. The film is good at immersing us in Nash’s delusions, particularly in the first hour of the film (it’s not until the hour mark that anyone overtly states there is anything wrong with Nash beyond eccentricity and social awkwardness). Howard shoots the fantasies totally straight: in fact if you had managed to avoid knowing what the film is about, you can totally imagine being tricked into thinking it’s a genuine spy thriller.

With that though, the film gives you just enough hints. Take a beat and look at Nash’s CIA actions and they don’t make much sense. A secret code that involves him tearing pages out of thousands of magazines and pinning them up around his office connected with bits of string (standard filmic language for the obsessive nutter)? The CIA injecting a number implant into his arm? A dead drop at a posh house which requires letters to be sealed with wax? The film gives us the hints that Nash is more troubled than just awkward around people, but doesn’t lay it on too thick. And at least one plot reveal that something we have seen was in fact a Nash-delusion the whole time is so skilfully presented that it surprised me (and I know surprised several other people).

The film is also strong on schizophrenia and delusion. Reworking Nash’s real-life auditory hallucinations into visual fantasies (including imagined buildings and people) works really effectively for film. It also really opens up for us the horror of how difficult living with something like this might be. How would you feel if you could never trust the world you saw around you? What if you discovered things that were central to your life turned out to be fantasies? That people you had built relationships with were not real? That’s a traumatic emotional burden, and the film is very strong at building your empathy with Nash.

It’s also helped by Crowe’s very effective performance in the lead. Shy, buttoned-up, physically awkward, his eyes always cast down, body slouched and voice an embarrassed mumble, Crowe brilliantly embodies a nervous outsider whose problems fitting in only magnify his growing dependence on fantasies that place him at the centre of the world. There is a touching vulnerability about Crowe here that so rarely gets seen. A big part of the film’s success is due to his performance. 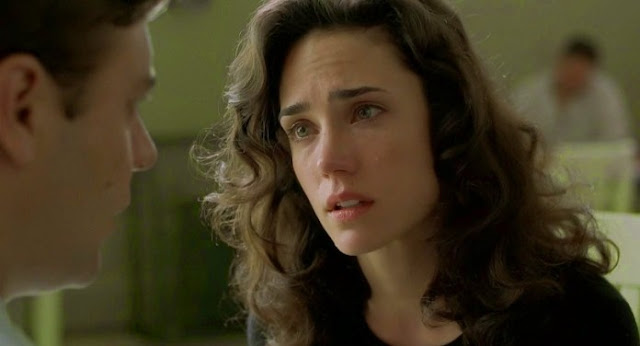 Jennifer Connelly also makes a great deal of her very traditional role as the supportive wife, bringing just the right level of assurance, spark and warmth to the role. Connelly carefully shifts the character from flirtatious confidence to heartbroken but supportive wife. But she doesn’t lose track of Alicia’s own frustrations at living with a medicated, unresponsive husband – even if, of course, any regrets she may have about the way her life turned out are overcome swiftly.

Which of course is completely different from real life where, for all her support, the couple divorced. Nash also had a baby (which he didn’t acknowledge) with a nurse he had an affair with. But these are real life complexities that have no place in a crowd-pleasing biopic like this. Similarly gone are Nash’s possible flirtations with bisexuality, his experiments with drugs or his flashes of violence. Added in are an entirely invented “pen gifting” Princeton ceremony and Nash’s Nobel prize acceptance speech where he gives thanks to his loving wife (in real life no such speech happened and the couple were separated). But that’s not the story this film wants to tell, so truth can go hang.

Perhaps these, post-diagnosis, difficulties are why the final third of the story – which sees Nash casting aside the invasive treatments to overcome the power his delusions have over him through willpower alone – is the least involving part. After all, they had to drop most of the actual real-life events that happened (see above). But there simply isn’t as much drama in watching someone quietly adjust to rebuilding a career in maths as there is in seeing them struggle.

Perhaps as well, because maths is a pretty difficult to bring to the screen. The film falls back into many accepted visual tropes – you’ll see a lot of writing on windows – and explains Nash’s theory of co-operative dynamics with a bar-and-booze based conversation around pulling girls in bars. That’s about as far as engagement with maths and understanding his theories goes – but we take it as read that Nash is a genius because he acts like one, people tells he is and he writes lots of big equations on boards.

A Beautiful Mind offers few real surprises (except for one) and presents a story that Hollywood has basically been making for decades. Things from real-life that don’t fit the story have been cut out, to make this as conventional a film as possible: the troubled genius and the loving wife behind him. It’s very well played (as well as Crowe and Connelly, Paul Bettany is brilliantly charismatic as Nash’s eccentric college roommate) and directed with a professional skill. But it’s also a very safe and even conservative film that has skill but not inspiration.