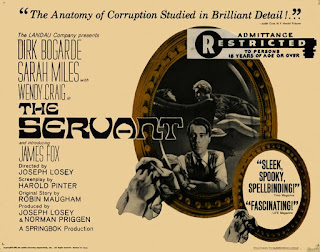 Imagine a world where Bertie Wooster was a weak-willed, sexually confused drunk and Jeeves a malign force, to whom control over and destruction of his master go hand-in-hand. That’s the basic set-up of Joseph Losey’s masterpiece The Servant, a fascinating and brilliant exploration of class and sex in Britain in the 1960s, a lean, razor sharp, gripping and sinister film that lingers in your memory like a nightmare you can’t shake off.

Tony (James Fox) is a louche, rich young man returning home to Blighty, looking to expand his inherited fortune through dodgy property investments in Brazil. Before then, he needs a home to call his own – and a gentlemen’s gentlemen to run it. Tony hires Barrett (Dirk Bogarde), a scrupulously polite, observant man, able to meet every single one of his employer’s needs. But why is Tony’s fiancé Susan (Wendy Craig) so instinctively hostile to Barrett? And what is Barrett’s exact relationship with the housemaid Vera (Sarah Miles) he introduces into the house – and who quickly becomes the focus of Tony’s interest? Over time, the balance of power between servant and master becomes more and more uncertain.

Losey was an ex-pat American, driven out of the country by the McCarthy hearings. This adaptation of a Robin Maugham novel is the sort of brilliant deconstruction of (and assault on) the British class system and manners that perhaps only an outsider) could have made. The film drips with an air of corruption and vice. Even the earliest, most unobtrusive frames carry an air of over-observant malice. No coincidence this is also the leading quality of Barrett, perhaps one of the most darkly malign forces on film, whose piercing intelligence sees everything and whose self-control never slips. Losey’s camera constantly lingers over the slightest shot and detail, to an increasingly unsettling degree. As the plot becomes increasingly dark, claustrophobic and horrifying, the film’s exploration of the class-fuelled psycho-sexual, alcohol-fuelled relationship between Barrett and Tony becomes ever more pointed.

Losey partnered with the perfect script writer in Harold Pinter (who also briefly appears as a posh restaurant goer). Pinter’s lean, spare and menacing dialogue, with its corrupted poetry and acute psychological insight, is easily his finest film script – and perhaps the only one that truly could sit alongside his finest stage work. Pinter’s brutal vision of this twisted world is coated in a dark menacing commentary on Wodehouse (Susan and Barrett’s “duel” over the placing of a vase comes almost straight out of Jeeves) – and above all on the weakness that underlies those dependent on servants, as well as the loathing a servant can develop for his master, while still loving the control he has over his life. 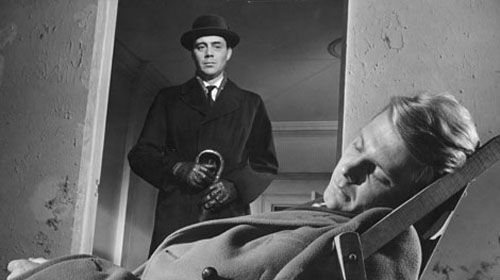 Losey responds to this masterful script with some inspired work, making the house where the action takes place increasingly claustrophobic and disturbing. The camera work slowly becomes more intimate as the film progresses – and Barrett entraps Tony increasingly into a total, infantile dependence on him. Takes become longer as the house itself – increasingly dishevelled, with Barrett’s property increasingly appearing throughout the property, while Tony’s goods are disposed of – seems to close in around the action. Reflections and mirrors increasingly dominate the film, as if pulling us with Tony through a glass darkly.

It’s a good servant who understands his master’s needs before he knows them. Barrett is the best kind of servant. Within seconds, the unctuous, Uriah Heap-like Barrett (ever so ‘umble), has dissected the character of the foppishly weak playboy Tony, and identified him as man with no will of his own, ripe to be dominated and manipulated. Dirk Bogarde has never been better than his work here, a terrifyingly precise and soulless manipulator, whose veneer of obsequious service drops away with his affected accent to reveal a deeply corrupted, terrifyingly cruel man. Bogarde never allows a second of doubt to enter Barrett’s mind – even when it (briefly) looks like he’s lost his position, Barrett’s face is contorted with a contemptuous curl of the mouth and a cocky defiance. It’s brilliant work from Bogarde, creating one of cinema’s greatest monsters, destroying because he can.

His tools are of course to use his master’s fondness for booze and pretty faces against him. Vera – played with a sparkingly flirtatious richness by Sarah Miles, which disguises her ruthless disgust for Tony and his selfishness – is inveigled into the house as Barrett’s “sister” (actually his mistress), and swiftly instructed to seduce the hapless Tony, bending this playboy to her will. Losey’s camera follows in smooth shots as this woman moves from one man’s bed to another – while you can feel the influence of Pinter in the spare, sexually charged power Vera uses to seduce Tony (and the hints of submissive excitement in Tony). Losey soundtracks their first encounter – Miles erotically discussing the weather, pure Pinter genius, while Fox’s throat is so dry you can almost feel it yourself – with first the dripping of a tap, then the rocking back and forth of a pan in the sink. It brilliantly suggests the way Tony himself seems to be being consumed in a hypnotic trap. 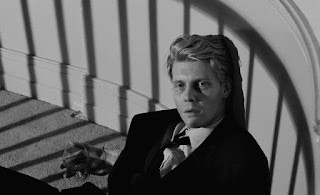 Not that Tony is particularly sympathetic himself: a weak-willed, rather feckless and languid playboy whose interests in pleasure quickly tip into addiction. James Fox is perfectly cast in a role that plays on his aristocratic assurance, but finds deep reserves of doubt and inadequacy in him. Pinter and Losey draw more than a bit of a question mark over the sexual undertone in the relationship between Barrett (at least metrosexual) and Tony, that travels across sharing the favours of Vera. After (temporarily) throwing Vera and Barrett out, Tony collapses into a grief-stricken mess over Vera’s bed – the bed shared with Barrett – the camera gliding gently over male nudes pinned to the wall. Later Tony will debase himself fully to Barrett, reduced to crawling around the floor, his tie used as leash, dragged to perform with prostitutes for Barrett’s dark amusement.

If there is a character who sees through this early it’s Wendy Craig’s sensitively played Susan – but even she can have no idea of the horrors of Barrett’s plans to break Tony completely to his will. Susan recognises – even if she can’t understand why – the sinister satanic nature of Barrett, even while she seems powerless to do anything about it. Her attempts to empower Tony to break his dependence on this omniscient figure fail completely. In a beautiful Pinterish touch, at the end she almost considers joining their bizarre, sex and alcohol fuelled menage – as close as cinema as perhaps got to skirting a sort of sexual hell.

The final act of the film (it has a neat three act structure, Pinter superbly constructing the screenplay to show Barrett and Tony’s shifting power relationship), sees an almost infantalised Tony now meekly accepting (almost apologising) as Barrett lets rip – all pretence at humbleness gone and Northern vowels increasingly let loose – with his abuse and disgust.

In a brilliantly dark commentary on the upper and serving class, such is the dependence on one for the other, that the house collapses in Barrett’s temporary absence. The power may lie with Tony – but when Barrett stops collaborating with that, the imbalance between them is revealed. It’s Barrett who can actually do things – from cleaning to cooking – that Tony cannot. The drive and will of the middle classes eventually overwhelms and breaks the upper class, turning them into a vehicle for their own entertainment, like some sort of dark National Trust.

The Servant is a profoundly brilliant film, one that could stake a claim for being one of the greatest British films ever made. Losey’s sharp outsider’s eye brilliantly dissects both the tensions between the classes, but also the disturbingly awkward relationship the British have about sex, a drug for the reserved, a pot of unspoken but deeply desired treats. Bogarde is quite simply superb, Barrett is one of the greatest monsters of cinema who could strike fear into the heart of Hannibal Lecter. Pinter’s dialogue is brilliant. This psycho-sexual class drama is a work of art and essential viewing.