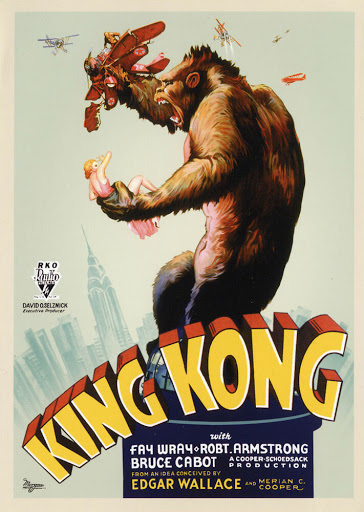 Of course, Citizen Kane is possibly the greatest and most influential film ever made. But, let’s be honest the paw prints of Kong is what we see most often in the latest Hollywood blockbuster. Kong may have met his end atop the Statue of Liberty (a death the poster spoiled), but his children are everywhere, from Alien to Jurassic Park to Avengers: Endgame. King Kong basically sets the template for special effects movies and Hollywood has almost been remaking it, in some way shape or form, for almost ninety years. But few films can match its momentum, action – or above all the heart it gives to its beast.

Carl Denham (Robert Armstrong) is a Hollywood director who has a plan to make his next film a huge success. He’s got a map to Skull Island (no need to worry with that name) where he’s heard rumour that a mighty creature is just waiting to star in his next film. Denham needs a female lead – so plucks Ann Darrow (Fay Wray) off the streets promising her the adventure of a lifetime. During the voyage to the island, she falls in love with first mate Jack Driscoll (Bruce Cabot). On arrival at the island they find a tribe of ferocious narratives, who kidnap Ann intending to sacrifice her to their god Kong – a massive gorilla. Instead Kong falls for Ann and carries her into the jungle. When Driscoll and Denham go to save her they find Skull Island is a dangerous place (who knew!), stuffed with brutal dinosaurs and scary beasts – and that Kong himself has no plans to give Ann back.

King Kong’s final hour is essentially little more than a stream of action scenes. However, few action films since have paced its action as well as this film does. With special effects by Willis O’Brien, one of the earliest masters of stop-motion, Kong in turn takes on a T-Rex, a pterodactyl, a village of natives and then most of New York in a series of escalating and dramatic sequences which use all the tricks Hollywood had, from animation to models and back projection. Each of these sequences are perfectly done and carry the sort of awe that stop-motion animation can project – all those hours of work! – helped by the successful (and brilliantly clever) use of back-projection to have these battling beasts seeming to tower over the human cast. You can imagine how thrilling it must have been – I’m not sure anything like this had been seen before. 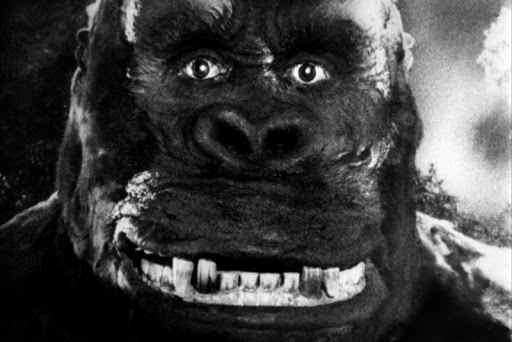 But the film has really lasted because Willis O’Brien’s skill is to add humanity and sensitivity to Kong himself. There is a reason why Peter Jackson (director of the sensitive but overextended remake) talked of weeping when he saw Kong meet his end. From almost the very first shot, Cooper and O’Brien cut to Kong’s eyes, which have a surprising soulfulness to them. And after all what does Kong really do wrong in this film? He is perfectly happy on Skull Island – he even only attacks other creatures when they make the move on him – he has no desire to go to New York and spends half the film trying to protect Ann from danger (not that she thanks him for it). The animation takes several moments to create the soul in Kong – from the ripples of his fur to his curious inclines of the head. After defeating creatures, he curiously picks up their crushed bodies, as if surprised to find them unresponsive. He gently moves Ann. There is a sort of innocence to him. After all what is he but a small-town guy who heads to the big city and falls for the wrong gal?

As such it’s rather hard not to root for him – or feel his pain (and shock) when attacked by planes at the top of the Empire State Building. You can see in Kong’s eyes the lack of understanding about what these metal objects are that are punching through his skin. The shooting gallery is tinged with tragedy – and it’s hard not to cheer when Kong manages to take one of these planes down. For all his fierceness, Kong seems like a real person, a vulnerable guy taken out of his depth against his will. The cruelty of exploiting Kong for Broadway ticket sales, as Denham plans to do, seems particularly un-just. It brilliantly allows us to get the best of both worlds: we can enjoy the spectacle of the wild animal Kong snapping the jaws of T-Rexs but we also feel for him as a confused and frightened animal put to death in a world he doesn’t understand.

Perhaps its easier to sympathise with Kong because so many of the human characters in it barely register. The first forty minutes is low-key – and often frankly rather flat – competently filmed but fairly-stiff build-up, carefully (and at times rather pointedly) establishing the situation and themes. None of the actors make much an impression (not helped that the second half of the film is so Kong focused that they hardly have a line to share). Robert Armstrong is effectively arrogant and ambitious as Denham. Bruce Cabot is pretty wooden as Driscoll (his first film after being recruited from the studio doorman staff, he has said he essentially stood where he was told and that was it). Fay Wray has a certain sweetness and charm as Ann, but barely opens her mouth other than to scream after the first forty minutes (in a neat bit of wit, her rehearsal on ship is standing still and practising screaming silently at an object she can’t see). With its blundering Hollywood director at the heart of all the chaos, King Kong could also be one of the first Hollywood satires. 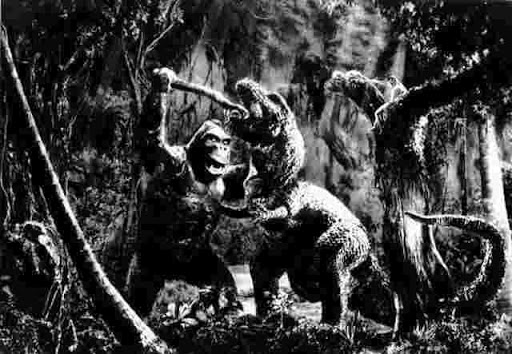 Intentionally or not the film has an imperialism to it. Denham is an arrogant man out of his depth – although I am not sure how far the film is aware of this – and the crew come across as arrogant and clueless, blundering into a wild environment with an armed over-confidence (that quickly gets them all killed – most of them tumbling to their doom with an almost sickening rag doll snap after a meeting with Kong). You can sense that as well in the awkward lack of PC in framing the (black) residents of Skull Island as blood-thirsty savages with a lust for human sacrifice. However, with its eventual sympathy for Kong, there is enough here to allow the viewer to read into it a certain amount of post-colonial criticism of this sort of H Rider Haggard meets Arthur Conan Doyle world.

The film is very proud of its “Twas beauty that killed the beast” concept (it’s repeated numerous times in the film – not least most famously at the end) – but it’s an idea that is already framing Kong as the victim. So, for all the triumph of the design – the production design is stunning, rarely have Hollywood back lots looked as good – and the awe of Kong, the idea of him as a victim is there from the start.

A lot of that awe though comes from possibly the film’s MVP: Max Steiner. King Kong is one of the first films to use a full orchestral score and the music is vital to adding heft, drama and danger to this stop-motion beast. Steiner’s score superbly uses motifs to build Kong’s presence and operatic crescendos that brilliantly heighten the drama. It’s certainly one of the most influential scores ever written – and it’s impact on film history is so lasting, that watching the film today you take it’s revolutionary nature for granted, so often has the way of using music become part of our accepted cinematic language.

King Kong lasts because of the awe it builds for the monster, but also the way we start to feel for him. Complimented by the professional skill of Cooper and Schoedsack’s direction, King Kong still grips today, for all that you need to read into it more depth than is (perhaps) there. But depth isn’t what made Kong great. It was the excitement and drama of the spectacle - and its so exciting you barely notice that Kong dramatically increases in scale as the film continues. And while special effects have moved on, the power of what’s presented here hasn’t. Deserves to be listed as one of the most influential films ever made.