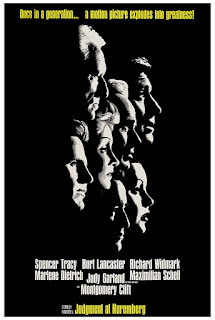 “I was just following orders”. It’s a statement you instantly associate with people who know they are doing the wrong thing, but cling to the idea it’s not their responsibility because they’ve been told to do it. The Nuremberg trials – which started with the major surviving war criminals, but then investigated every level of German society from the army to industry to doctors to the judiciary – exploded this as an excuse. But the trials also raised wider questions, ones that Judgment at Nuremberg explores: how do you make judgments for individuals when, arguably, nearly everyone in the country holds some sort of moral responsibility? What happens when justice collides with political reality? What price is put on getting justice for the few against the need to move on?

These, among others, are fascinating questions explored in Stanley Kramer’s engrossing – if at times a little dry and on-the-nose – film. In 1948 Judge Dan Hayward (Spencer Tracy) arrives in war-torn Nuremberg to judge the trial of four senior German judges. The most prominent of the accused is internationally renowned Dr Ernst Janning (Burt Lancaster). Janning’s passionate advocate Hans Rolfe (Maximilian Schell) believes the trial is about the Allies punishing the Germans and wants to show “we were not all like them”. Prosecuting laywer Colonel Ted Lawson (Richard Widmark) wants the trials to continue until all the guilty have been punished. But with Cold War tensions rising – and Berlin already under blockade by the Soviets – the politicians back home want the trials to wind down, particularly as the Germans could be key allies against the USSR. How will Hayward balance these pressures as the trial progresses?

Kramer’s film is a brilliant reconstruction of the detail of the trials. He had wanted to film the entire thing on location – but, when the trial room was unavailable, Kramer had the trial room rebuilt in exact detail in the studio (the production design is absolutely spot-on by Rudolph Sternard). The film stages all the issues of simultaneous translation, headphones and trial procedure in loving detail. His technical direction is well managed – even if the camera perhaps once too often pans around those involved in the trial while they speak. The trial drama is structured around three key witnesses (rather than documents), and brings out impressive performances from the entire cast.

Abby Mann’s screenplay wisely focuses in, not on the primary Nuremberg trials, but one of the many sub-trials. Little known, this works so well dramatically, because they both delve deeper into how every facet of German life was corrupted by Nazism – that in this case, leading judges condemned those they knew were innocent to death – and also allow an exploration around the purpose of the Nuremberg trials themselves. Were these trials crucially about justice at all costs and should continue indefinitely – as some characters clearly believe? Or were they meant as representative affairs, demonstrating the guilt of a selected few, at which point their purpose was done? 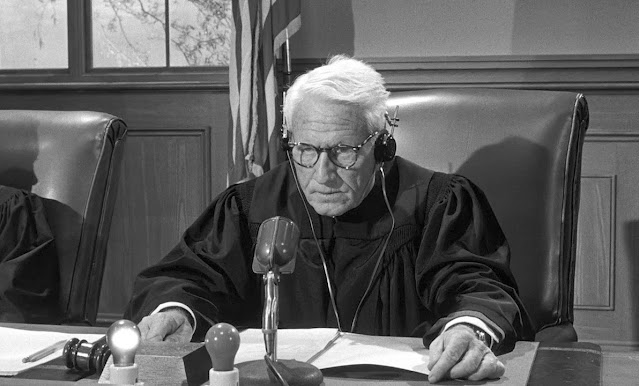 Kramer’s film is an educative piece, which explores this. Crucially several German characters are introduced, each of them unsure as to how much the national guilt should apply to them. Should Hayward’s household staff consider themselves guilty? As Hayward points out, Dachau was only about 20 miles away: not to know of its existence at all, was surely be wilful ignorance. Marlene Dietrich (excellent as an austere widow), is bitter that she has lost everything after her husband (a German general) was executed (an execution that many of the characters feel was harsh). He never liked Hitler, and he wasn’t a Nazi: how bad could he have been? He only did his duty right?

Meanwhile, firebrand lawyer Hans Rolfe believes that he must salvage some sense of German identity from the trial: he needs to show that “we were not all like that”. And rescuing the reputation of Dr Janning as “the Good German” is crucial to that. An Oscar-winning Schell (the part is perfect for his grandiose style) superbly captures the agonised guilt that has transformed into anger in this man: the desperation to protect his country that leads him to undertake the same brutal interrogations of witnesses during the trial that his clients are accused of doing. Repeating the same actions of the past that he hates, with a misguided goal of restoring pride to his country.

And why does Dr Janning become the focus of this desire to show not everyone was bad? One of the interesting things the film raises is questions of class. Rolfe sees him as the model Good German and Hayward struggles to see why he was involved in miscarriages of justice, because he is very much “one of us”. Ramrod straight, he’s no fanatic (like one of his fellow accused), he’s a noble, world-renowned lawyer. Lancaster’s Janning, with his rigid physicality, clearly thinks himself a world above his fellow accused. He has touched pitch, but feels he’s not really been defiled at heart: that there were clear reasons why he did the things he did. He has no sympathy for the crudity of Nazism, but still feel ashamed that he allowed himself to get tied up with it. He starts the trial trying to be above the entire process, as if not engaging will somehow stop him from feeling corrupted, even while his haunted face drips with shame. 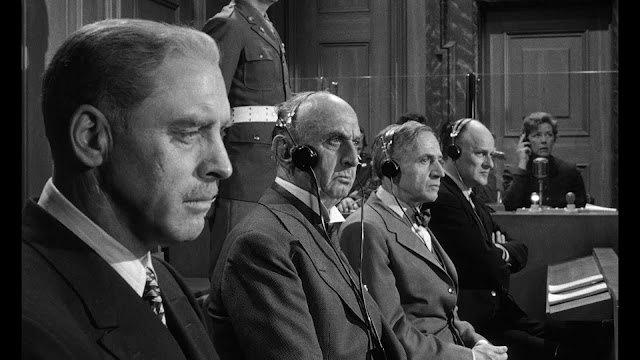 It’s a nobility that many on the US side find appealing. It appeals to the same minds that deems Richard Widmark’s combatative Colonel Lawson as not quite gentlemanly, but vindictive. Never mind that Widmark’s lawyer wants justice done, regardless of the cost. It’s the same sympathy many now feel for Dietrich’s dignified widow, who feels so classy and noble that she can’t really be implicated in any nastiness. Janning unnerves Hayward and others, because if he can fall so can they. It also makes him a perfect candidate for rehabilitation. And, with the Soviets closing in on Berlin, many among the Americans want such a fate as much as Rolfe does, so that Germany can be rebuilt as a bulwark against Communism. But are we kidding ourselves? Janning may be the face of decency, but how decent can he be when he decided justice was an optional extra in his courtroom?

The film carefully explores these questions of politics being the art of compromise: of the need perhaps to end one era in order to start another. They’re attitudes I think the film acknowledges as legitimate, but also questions: “What was the war for?” Widmark’s character asks. When you have horrors such as those in the camps – and the film plays one of the key films to powerful effect during the trial – surely politics as normal can’t be allowed to continue? (Interestingly the film allows Dietrich and Schell’s characters to both, legitimately, question the inclusion of this evidence as too emotive and not relevant to the actual crimes of the accused.) Hayward himself comes under pressure to deliver light sentences which will be better for the country. Will he do so?

How can he when the evidence of suffering is so clear to him. The two key witnesses bought into the film are a man with learning difficulties and a woman who had been accused (falsely) of being seduced by a Jewish neighbour. The roles are played by Montgomery Clift and Judy Garland – and a lot of the emotion of these scenes partly comes from the tortured vulnerability of these two actors. These are people whose lives have been shattered – unjustly – and have paid terrible personal prices. Yes it might be expedient for us to look past these stories, but is it right?

Yes, you can argue Judgment at Nuremberg is a little preachy, but I think there are many more interesting ideas thrown up here than Kramer (usually denounced as a simple right-and-wrong director) gets credit for. The performances are superb: Schell is of course marvellous, but Spencer Tracy perfectly channels his ability to project morality as the unsettled judge who finds his easy assumptions challenged. And the film finally boils down perhaps to the simple question of right and wrong.

Even at the end Janning, while admitting the justice of his sentence, and the wrongness of his actions, is still desperate for everyone to know he wasn’t really one of them. That he never knew it would come to those horrors. As Hayward says “It came to that the first time you sentenced a man to death who you knew to be innocent”. Perhaps that the message of the film: justice is complex but needs to be done – and it doesn’t matter about your motives or thoughts, only the things you do.