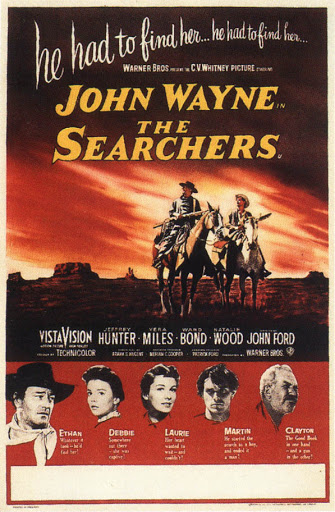 John Ford’s career was a long tribute to the decency of the regular American. How fascinating then that one of his greatest films is in fact a dark investigation into the dangers of obsession, vengeance and prejudice in ordinary Americans. Working with his regular leading man, John Wayne, together they created a character who shared many qualities with Ford’s other leading men – a rugged, determined, taciturn man of the wilderness – but laced him with deeply negative attitudes and a horrendously damaged psyche. The Searchers becomes a masterpiece, presenting how narrow the line between hero and villain can be while – in an admittedly very gentle way – posing questions about the claims of the settlers to moral superiority.

Ethan Edwards (John Wayne) returns to his brother’s homestead from an unspecified (though clearly morally questionable) career as a gun for hire after fighting for the confederacy (a cause he sees no reason to disavow). He’s an awkward presence, with an unspoken love for his brother Aaron’s (Walter Coy) wife Martha (Dorothy Jordan) and a racial hostility towards their adopted son Martin (Jeffrey Hunter) who is one-eighth Cherokee. Shortly after his arrival, an Indian raid draws him and most of the local men on a futile chase. While they are gone, the Edwards’ homestead is destroyed, with the family all murdered except daughter Debbie. Ethan and Martin begin what becomes a five-year quest to find her and bring her home – although as he discovers Debbie has become wife to her kidnapper, the war chief Scar (Henry Brandon), Ethan’s aim shifts from rescue to executing Debbie for racial disloyalty.

Racism is what lies at the heart of The Searchers and around discussions of the film today. Firstly, let’s acknowledge how brave the film is in presenting Ethan’s racially motivated rage without excuse. This was after all John Wayne, the straightest shooter of the lot. Here, in no doubt his greatest ever performance, Wayne’s Mount Rushmore-like qualities are inverted into a bitter, lonely man whose murderous rage against the Native Americans is extreme, even within an environment which sees the tribes as a dangerous “other”.

Edwards’ racism tips into everything and is there right from the start: “I could mistake you for a half breed” he scowls at Martin. Later he will prevent Martin drinking alcohol – a clear reference to the belief among settlers that one drop of alcohol turns Indians into savage beasts. One of his first actions on the trail is to desecrate the buried corpse of an Indian, shooting out his eyes (condemning him to walk sightless in the afterlife). In a gunfight he has to be stopped from shooting retreating Indians in the back. Later, in a crazed fury, he guns down buffalo simply to deny them as food to the tribes. That’s not to mention his disgust with every trace of indigenous culture. 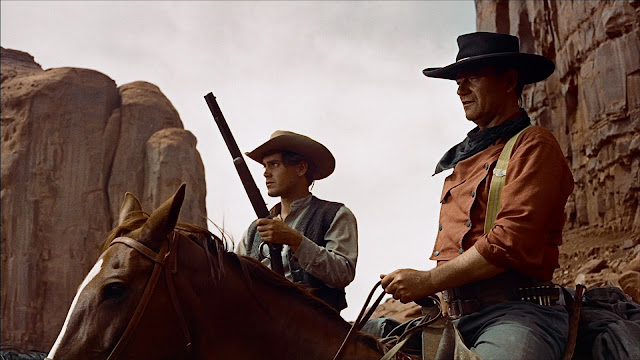 What’s striking watching the film is that, even though he’s the central character and is played by John Wayne, Ethan may well actually be the villain of the piece – or at best an anti-hero wild card. Our actual hero is the kindly, decent and brave Martin Pawley, played with a slight nervousness by Jeffrey Hunter. Martin is appalled by Ethan’s violence, his anger and above all by his plan for enforcing racial harmony by exterminating the niece he sees as a race traitor. It’s not just the fact he has Cherokee blood that makes Martin appalled by the danger in Ethan. It’s the simple fact that he’s just a decent guy, who recognises that good and bad isn’t a question of race but a question of people. And his presence on the quest, it’s made clear, is as much about protecting Debbie from Ethan as it is finding and rescuing her.

You can see these attitudes quite clearly late in the film, where the pair encounter white women who have been recovered from Indian kidnappers. These women are confused and traumatised. But while Martin attempts to communicate with and comfort them, to Ethan they are worse than nothing now. “They ain’t white anymore” he scowls at a soldier. Leaving them, Ford holds the shot on Wayne who turns to look back at them with a face dripping with such disgust and loathing, it sears into the memory.

Does the film condemn these attitudes? You can argue that the film plays into a racial nightmare – white women kidnapped and violated by savage tribesmen. But Ford is, I’d suggest, presenting racism here – and going as far as he could in the 1950s to attack it. Ethan and Martin encounter an Indian settlement that has been attacked by the cavalry. The settlement is a burnt-out husk, with Indian women and children among those indiscriminately slain – visually it is immediately reminiscent of the burnt-out Edwards homestead. Another later cavalry charge against the Indians will again see panicked women and children flee in terror. Even Scar, the villain of the piece, is motivated just like Ethan by anger – his actions are a response to the murder of two of his children. And his scalping, rape and murder don’t look so different from Ethan, who shoots people in the back, plans to murder his niece and later scalps a dead man.

The Searchers takes a slightly nihilistic view that the West was a violent place – for all the beauty Ford discovers in his crisply sublime shots of monument valley – and that many of the people in it had questionable motives and principles. A ”hero” for this time might well be Ethan, a sullen and violent man under a veneer of gentlemanly politeness, clearly motivated from the start far more by a desire for revenge for the murder of the woman he loves. Ford, Wayne and Jordan establish this love between Ethan and Martha subtly but unmistakably – the opening scenes are littered with moments of the two of them sharing glances and a hesitant but unmistakeable physical intimacy.

Again, a lot of the quality of this comes back to the wonderful work Ford draws from Wayne, helping the actor to find the cracks and flaws in this marble bust of Americanism. Wayne’s Ethan is awkward, angry, distant, difficult, cruel – a natural outsider, who has grown bitter against the world. Discovering Martha’s body, Wayne also allows Ethan to crumple into the sort of grief that translates within seconds into an iron loathing for the world and everything in it. He talks of the certainty of finding Debbie – but it’s a certainty born more of his idea of his own superior (white) determination rather than any faith (for all the language could suggest that). Ethan is in fact hostile and contemptuous of faith of any sort.

Ford frames Ethan frequently as an outsider, often framed uncomfortably in doorways, darkened walls seeming to close around him. Nowhere is this more beautifully done than in the film’s final shot which finds Ethan alone and forgotten outside the Jorgensen homestead, a man who has no place in the civilised world of family and friends, but an outsider with no place anywhere who must return to the wilderness. Wayne does this with a quiet, deflating gentleness – a beautiful suggestion of Ethan’s knowledge that the world is leaving him behind. Ford frames this beautifully in mid-shot to create one of the iconic images of cinema.

The Searchers isn’t perfect. There is a prolonged, slightly comic, sub-plot around Martin’s marriage to Laurie Jorgensen (Vera Miles in a thankless part), which culminates in the sort of fisticuff based comic stuff that looks more suited to The Quiet Man than here. The beautiful shots of monument valley are brilliantly done – but they also serve to point out the odd decision to shoot many of the exteriors on such obviously fake soundstages. While the film questions the attitudes and assumptions made about the Native American people in Hollywood films, the violent figure of Scar is the only Native American character given any real screen time (Martin’s accidental “wife” Look is treated as a joke, right up to her surprisingly tragic fate), making it easier to still see the tribes as an existential threat to civilisation, for all that Ford tries to contrast their suffering with the death of the settlers.

But Ford was trying to sneak something in here under the wire, at a time when people would only accept straight-forward stories of goodies and baddies in the West. He did this by turning Wayne for a pillar of taciturn goodness into someone who is almost a mirror image of his nemesis Scar, both men motivated by racial hatred. He parallels the violence of the Indians with the cavalry. He suggests in fact that there was good and bad on both sides. And I can’t think of another film where the viewer is convinced for a huge portion of the runtime that our hero intends to carry out an honour killing. The Searchers presents a man who holds racist views and trusts that we are smart enough to see the danger in Ethan’s extremism. Thankfully most of us are.