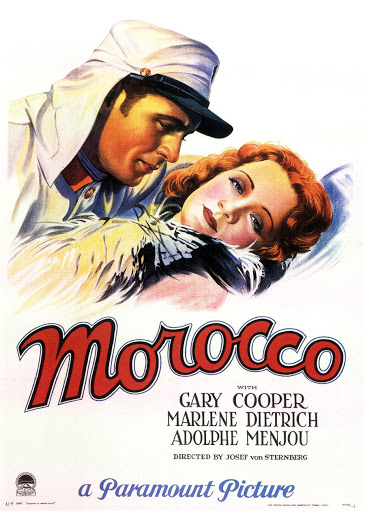 Josef von Sternberg was one of the greatest directors of early cinema – and Marlene Dietrich was his muse. Or was he her Svengali? Either way, they first worked together on German film The Blue Angel and such was the impression made by Dietrich, Hollywood was desperate to get her and von Sternberg together for a new picture that would channel her star power into ticket sales. Morocco is the picture they come up with, a romance tinged with heartbreak set in French occupied-Morocco around a Foreign Legion troop passing through town.

Dietrich was Amy Jolly, a woman of uncertain and shady past, new in town and making a living as a night club singer. There here routine encompasses everything from erotic singing in top hat and tails (complete with a bisexual vibe – you can tell this is pre-Code Hollywood?) to an apple selling singing routine. She’s loved by La Bessiere (a rather bland Adolphe Menjou), a stuffed shirt rich guy. But her heart belongs to man’s-man legionnaire Tom Brown (Gary Cooper), a toughened old soldier with a girl in every barracks town. Who will Amy end up with? Will she follow her heart or her head? Can she bear to live the life of a soldier’s mistress amongst the camp followers?

Writing it all down, there are probably few mysteries about the resolution you get from Morocco, which even at its 90 minute run time feels like an impossibly slim piece of fluff. But that hardly really matters when von Sternberg shoots the film with a romantic flourish and with Dietrich and Cooper as such compelling leads. It’s odd to think, looking at it now, that Morocco was acclaimed as one of the greatest films ever made on release (it’s not even the best or most lasting Dietrich/von Sternberg Hollywood collaboration of which there were five more to come).

But it lasts in history because it introduced Dietrich to the wider world. Von Sternberg took control over every aspect of her image to best present her to the world – including a torturous 45 takes of her first line (because after all the first line was the one that will make the first impression on an audience). Von Sternberg and cinematographer Lee Garmes choose lighting methods and angles that would enhance her features, and shot huge parts of the film to favour her (much to the annoyance of Gary Cooper, who resented von Sternberg’s shunting of him to the sidelines). 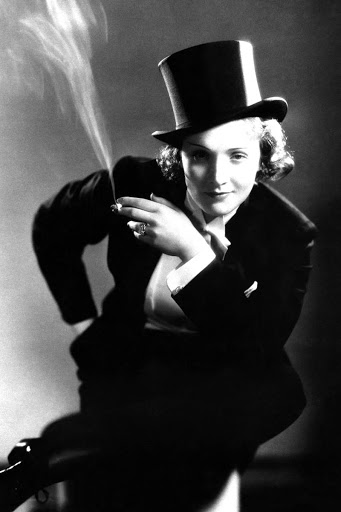 Von Sternberg was determined that Dietrich would make an impression: and she certainly did with her cabaret act, still probably the film’s highlight. Dressed in a striking male garb, her rendition of When Love Dies is sold on her confidence, sexual allure and tinge of bisexuality (viewers were scandalised and titalated that the routine ended with Dietrich playfully kissing a woman in the audience) to make a lasting impact. Von Sternberg lets the tension build as well by holding the camera calmly on Dietrich (in drag) while the audience at first boo before silencing and then being swept up in her performances. This is the approach taken for the rest of the film – and its rather weak plot – focusing on the a magnetic quality, the indefinable star quality some people have to just make you watch them.

It’s recognised by von Sternberg, who builds the film around her. It’s tempting to see Adolphe Menjou – the jilted would-be husband, in awe of the star – as a von Sternberg self-portrait, dressed as he is to resemble the director. But von Sternberg felt so confident over his control of Dietrich and her career, I suspect there is actually far more of him in lothario Tom Brown, the sort of man who may love a woman but also very much likes her to submit her will to his own. Brown may have his moments of decency – he wants Amy to have the best chance in life, which is clearly with La Bessiere rather than him – but he’s also an at times ruthless opportunist and adventurer, with a string of broken hearts behind him. Interestingly, considering their later films and her reputation, Dietrich’s Jolly is actually a fairly passive figure throughout the film, to whom events happen and who never feels in charge of her destiny. Perhaps more than a little of life drippling through to the screen?

Saying that the film has some bite in it, with the dialogue from Jules Furthman often rich, rough and ready, creating characters who speak at times bluntly but with a sort of urban poetry. Sadly, the dialogue scenes are often frequently the dullest in the film. Von Sternberg was still at the time a natural director of silent film, not the talkies. Hollywood itself had still not really learned how to do record dialogue and do camera movements at the same time, so most of the dialogue scenes are visually flat and rather forced (not helped by the storyline itself being often less then enthralling).

Where Morocco really comes into its own is when it falls back on visuals. As a director of pictures, von Sternberg is outstanding. The camera perfectly captures the bustle of the Moroccan market town. There is a beautiful sequence where Amy raises through a seemingly never-ending row of soldiers to try and find Tom. The Morocco in this film may bear almost no resemblance to the real Morocco – it’s clearly a Hollywood fantasy land – but it also looks at no time like it was shot on a Hollywood backlot. Tom Brown’s slow and sad browse through Amy’s dressing room, before deciding he should leave for her own good is hauntingly well done in near total silence, matched with beautifully empathetic camera moves. The final imagery, as our heroes head out into the sands of Morocco, is marvellous, a perfect collection of shots and reactions leading to an image for the ages.

And Morocco is a film of images strung together with a rather dull plot and a very stilted scenes of dialogue. Marlene Dietrich is at the centre of many of these images. This was her only Oscar nomination – but it’s not her finest performance. She’s still learning her craft and – above all you feel – still very much an elaborate prop for von Sternberg. The more they became something like equals the stronger the pictures would become. Gary Cooper was unhappy on the film – but actually his performance is remarkably strong and assured, dripping sexuality (von Sternberg also works a lovely little scene that pokes fun at Cooper’s height).

Morocco seems like a landmark of cinema that is of greater academic interest at times than it is dramatic. But when the dialogue fades away and the film is able to relax into the series of arresting images that make up most of it, it’s still a marvellous and intriguing work.