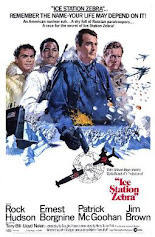 Rumour has it that Howard Hughes loved this movie so much, he insisted on the Las Vegas TV broadcaster he owned to screen the film over 100 times. For most of the rest of us, once will probably be enough to take in all the fun that can be pulled out of this sub-par Alistair MacLean Cold War thriller, a poor relation to The Guns of the Navarone and Where Eagles Dare.

It’s the middle of the Cold War and US submarine commander Jam
es Farraday (Rock Hudson) is ordered to the North Pole to rescue a British scientific team. However that mission is just a cover for the real goal – something to do with retrieving a top secret gizmo from a crashed satellite. Farraday is ordered to transport British intelligence agent “David Jones” (Patrick McGoohan) to the Pole, who has bought Soviet defector Boris Vaslov (Ernest Borgnine) along with him. En route, sabotage nearly downs the sub, and on arrival the base has been nearly destroyed. Looks like there is a traitor on board – but is it Boris or recently arrived marine Captain Leslie Anders (Jim Brown)? Who can tell?

To be honest most people watching the film. It’s one of many not-particularly-intriguing mysteries in a hopelessly over-extended film that takes nearly two hours to get going, and then crams its paper-thin characters into a series of adventures that bounce from dull to cliché with giddy haste. Directed with a professional lack of engagement by John Sturges (who could believe the director of Bad Day at Black Rock and The Great Escape could have made something as flat as this?).

It’s a film that mistakes lack of explanations and rushed conclusions for intriguing mystery. There is barely enough actual plot here to sustain an hour and a half let alone the nearly two and a half hours the film takes to get nowhere in particular. The middle of the film is given over to a series of submarine escapades that would have already felt familiar at the time from The Enemy Below and have been bettered since in countless submarine films. From deep dives to furiously leaking compartments, there isn’t anything particularly new here.

When we finally arrive at the polar base, there is finally some decent mystery – as well as a haunting atmosphere – as the characters explore the badly damaged base and its traumatised residents (You can see how this film influenced John Carpenter as he directed The Thing). Sadly, what the film hasn’t managed to do up to this point is make us care at all about any of the characters. Rock Hudson, never a particularly inspiring performer, makes a dry and unengaging lead (first choice Gregory Peck would have made the world of difference). Patrick McGoohan does his best as the mysterious British agent, but the character is so lightly written that you never really feel particularly intrigued by his mystery. Ernest Borgnine chews the scenery as the ex-Pat Soviet while Jim Brown is serviceable as the marine captain. Virtually no other character makes any real impact.

The film culminates eventually in a confusing stand-off between the Americans and the Soviets, until the villains reveal themselves and a détente that doesn’t end up destroying the world is revealed. That’s about the sum total of interest the film can spark. Other than that, it’s slow pace, unengaging characters, uninvolving plot and unoriginal action make it a great deal of fuss about nothing in particular. Howard Hughes may have wanted to watch it a hundred times. You probably won’t want to.