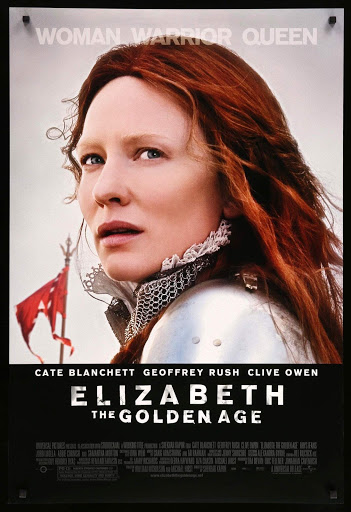 Its 1585 and the reign of Elizabeth I (Cate Blanchett) has seen England enter a Golden Age. But tensions are rising with the Spanish and their king Philip II (Jordi Molla). The Spanish plot to replace the protestant Elizabeth on the throne with the catholic Mary Queen of Scots (Samantha Morton), sending their agents (including the likes of Rhys Ifans and Eddie Redmayne) to England to ferment rebellion. Can Elizabeth’s trusted advisor Sir Francis Walsingham (Geoffrey Rush) root out this potential rebellion? Or could this be a trap to lure England into a naval war with Spain and its chilling armada of ships?

Elizabeth: The Golden Age is a late sequel to the more influential Elizabeth, which mixed in the ruthlessness of The Godfather, with a sprinkling of sex in a darkly tinged Elizabeth England which seemed to drip conspiracy (setting the tone for costume dramas for the next ten years at least). Compared to its original, Elizabeth: The Golden Age seems a much more traditional piece of filmmaking. It’s luscious and handsomely filmed, with the darkness and oppression of the original replaced with golden hued lighting, sumptuous (Oscar-winning) costumes and some very impressive set-designs, all of which help to point up the glamour of the past in a way that seems much more similar to a 1970s epic than the more inventive work of the original.

It’s a part of the film’s idea of the country now enjoying the glory Elizabeth’s reign has bought, with the dark corridors replaced by the bright lights of peace and opulence. The film’s reimagining of Tudor history does still present some interesting perspectives, not least in the character of Elizabeth. Now firmly in middle-age – and committed to a life of celibate singledom – Cate Blanchett’s regally imperious Elizabeth is still emotionally vulnerable with a deep sense of longing in her. Unable to live the life of romantic freedom she could in her youth, she now lives an emotional life vicariously through her ladies in waiting, particularly Abbie Cornish’s sharp and knowing Bess Throckmorton.

This focuses on Elizabeth alternating between encouraging and discouraging (due to her own half-realised romantic longing) a romance between Bess and famed explorer Walter Raleigh. Played by Clive Owen at his most buccaneering (with an accent that playfully lies between Norfolk and New England, suggesting the American accent came from Raleigh), Raleigh bewitches the Queen with exciting tales of abroad – but with her unable to flirt with him fully as she wishes, Bess is encouraged to dance intimately with him among other romantic gestures. The most important thing throughout for Elizabeth is that it is she controls and dictates the relationship – and when the couple start to make their own decisions, it leads to disaster.

It’s all part of Michael Hirst’s (here sharing script writing duties with William Nicholson) imaginative reinvention of Tudor history (remixed into an exciting version of what could have happened). This also comes together very nicely in an interesting conspiracy thriller take on the Babington plot and the goals of the Spanish to use it to manipulate both Elizabeth and Mary Queen of Scots. The film is at its strongest when playing with historical expectations.

However, too often it plays into the sort of “Britain Triumphant” nonsense that made Michael Gove on release (and you imagine Laurence Fox today – here popping up as Christopher Hatton) thrilled. The British characters – Elizabeth, Raleigh, Walsingham – are brave, charismatic, ingenious and attractive. The villainous Spanish are thick-lipped, spittle flecked, bad-haired meanies with Philip II literally a sinister limping hunchback. No scene in Spain is complete without dark lighting, chanting monks, massive crucifixes and a general air of oppression. When ships sink, the camera doesn’t miss the chance to capture a crucifix sinking to the bottom of the briny. The Babington conspirators plot out of a dyers shop, where blood red dye drips all around them. The plot culminates in a “just missed her” point blank gun confrontation (the film’s most silly flourish). Subtle it ain’t.

And also it feels a more Little Englander. Whereas the first film saw as much darkness and dirty dealing among the British as it did Europe, this film feels like a “Britain Stands Alone” against treacherous, lecherous, sanctimonious (or all three) Europeans. Sure the Armada was a terrific win for Britain – here with much of the credit reassigned to Raleigh who steers fire ships into the path of the Spanish ships (Drake is reimagined as a lumpen bureaucrat dazzled by Raleigh’s pizzazz) – but it owed as much (as even the Tudors themselves admitted) to the weather and luck as it did bravery and skill. Unlike the first film, Elizabeth: The Golden Age seems determined to define European and Catholic as suspiciously “other”. It makes for a less rewarding film.

And a less interesting one. For all its playing with psychology, this is a very much more traditional costume drama, celebrating Merrie Olde Englande in a way the original film challenged us to question our expectations. Kapur and Hirst settle for spectacle and style, over drama and truth. Blanchett is impressive as always – and the rest of the cast very sound – but this is a sequel that only lives as a counterpoint for the original.