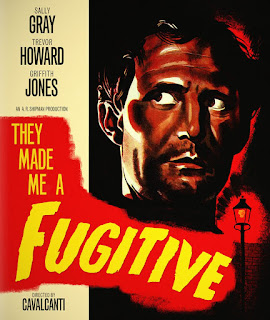 The Second World War is over – but the country is awash with ex-servicemen, not sure where they fit in, trained to kill. Clem Morgan (Trevor Howard) is one of them. A former RAF man, who escaped from a POW camp, he doesn’t know what to do with himself on civvie street. So he’s definitely open to an offer to work for black marketeer Narcy (Griffith Jones) – but not so keen once Narcy’s business dealings expand into drug smuggling and violence. Clem gets framed for the killing of a policeman and banged up in Dartmouth – where he receives a visit from Narcy’s mistreated girlfriend Sally (Sally Jones) who needs his help to prove Narcy is the real villain. Clem escapes, a fugitive, looking for, and on the run from, justice.

Cavalcanti’s film is a marvellous mix of noir, early kitchen-sink and faded post-war crime drama. The locations are run-down and dirty, the mood faded and worn out. The film is remarkably bitter, cynical and short on hope. Clem’s encounters take him past a gallery of those struggling in post-war Britain: black marketeers, shallow glamour-pusses, bored policemen, common criminals, vengeance minded housewives and brutal heavies. Everyone is corrupt, has violence or treachery in mind and don’t think twice about putting others through suffering. And to be honest, as a shambling, scruffy drunk, Clem makes a pretty good fit among them, a man whose best days happened somewhere in Germany in the 1940s and who hasn’t had a clue what to do with his life since.

The post-war Britain painted here isn’t nice. No wonder ruthless, thuggish black marketeers like Narcy (short for Narcissus of all things – which manages to be both a commentary on self-obsession, while being an abbreviation that sounds like Nasty or Nazi) are flourishing. Narcy – played with a callous, charismatic black-heartedness by Griffith Jones, in a performance bereft of any trace of morality – has no problem with any criminal act what-so-ever so long as it gets him what he wants. Smuggle drugs? Not a problem. Beat a woman? Line ‘em up. Murder a cold-footed subordinate? As many as needed. Narcy is a perfect emblem for this world, uncaring, brutal, sadistic and enjoying the fact that so many others are desperate.

His kingdom is a subterranean hell, in the basement of a undertakers. (It even has a huge sign reading RIP on the top of the building.) His haunts are foggy docksides, chilling streets and rough pubs. His followers are cowed former servicemen – although even they draw the line at using guns – and the police seem unable to touch him. But then Narcy’s world is pretty similar to the rest of England. The countryside Clem journeys through from Dartmouth to London to get his revenge is equally fog-ridden, cold, dirty and unattractive, full of farmers who shoot at him with buckshot and housewives who blackmail him to carry out their dirty deeds.

The film hinges at the half-way point on this surreal scene. Clem arrives at a home where the woman of the house – played with a sort of hypnotic monotone by  Vida Hope – allows him to wash, gives him new clothes, feeds him – and then hands over a gun and asks him to shoot her husband (a shambling drunk played by Maurice Denham). Clem refuses – he’s killed once in his life, while escaping a POW camp, and has no intentions of doing so again. He makes a run for it – at which point the woman does the deed herself, and places the blame on Clem. It’s a bizarre scene, but strangely magnetic – its a window into this topsy-turvy world. Killing means something different to everyone after years of the world tearing itself apart, and behind the chintz curtains of middle-class Britain, we can’t be certain there doesn’t lurk something dark and dangerous.

Trevor Howard makes a perfect lead for this sort of grimy world. He’s got the “hail well met” stance of Clem down perfectly: but he’s a character who also carries a natural integrity to him, someone who we can trust. No matter how drunken, shambling and untidy he gets when he’s in his cups, there is something decent in him we can trust. It also means we can root for him when the chips are down (which they are for most of the film), and while he finds himself in bizarre and dangerous situations, from being shot at by farmers to struggling to escape the curiosity of lorry drivers.

Howard powers the whole film, even if Griffith Jones perhaps carries it away in the more colourful part of Narcy. Sally Jones makes for a relatable woman of fixed morality (perhaps the only truly moral person in the whole film) who has somehow found herself in a dirty world. Cavalcanti’s world is filthy. He shoots it with a delicate but immersive intensity. It’s a surprisingly violent film. Knifes are used, shots are fired and Narcy beats two women with a viciousness (the first is shot with a whirling camera, which might go a little too far to get us to relate to the dizzying violence).

It’s also a film that seems low on hope. It ends on a downer. The forces of good – like the police – seem distant, uninvolved or, at best, useless in the face of all the crime. The forces of evil are left to effectively police themselves and corrupt but decent men like Clem get stuck in the middle. They Made Me a Fugitive makes for an involving and gripping thriller, a perfectly made little British B movie.