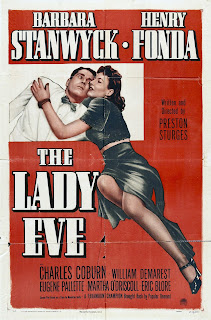 In the 1940s, Preston Sturges hit a rich vein of form that led to him making some of the finest comedies in Hollywood history. Perhaps the greatest of that run of hits was the hilariously heartfelt The Lady Eve, a comedy that is as much a rich, twisted romance as it is a fast-paced screwball comedy of long cons and deception. Played to the hilt by a perfectly selected cast, Sturges’ dialogue zings in every scene, making this timeless entertainment.

Charles Poncefort Pike (Henry Fonda) is the young heir to a brewery fortune (the most famous brand being “The Ale That Won for Yale”). Naïve and shy, Charles is a passionate ophiologist (that’s snake-expert to you and me) who is just returning from a year-long expedition in the Amazon. On the cruise ship taking him back home, Charles is the target of every single woman on the boat – and also for a pair of expert con artists, Jean (Barbara Stanwyck) and her father “Colonel” Harrington (Charles Coburn). At first it’s his money they want, but Jean surprises herself by falling hard for Charles on the voyage – only to be stung when Charles coldly rejects her after learning the truth about her. So Jean decides on revenge, disguising herself as ex-pat aristocrat “Lady Eve” and proceeding to win over Charles’ upper-class New York family, and seduce Charles all over again.

Not a single opportunity for comedy is missed in Sturges fast-paced, beautifully done film. As well as some truly wonderful word-play and verbal comedy, the film is crammed with vintage sight gags (Charles’ struggles with an overly affectionate horse is a hilarious highlight) and keeps up a series of perfectly judged running gags (one of the best of which falls to William Demarest’s befuddled bruiser-turned-valet Muggsy). But the comedy works because it’s invested in characters who feel real – despite all the absurdity – and demonstrate real emotions alongside all the comic invention. It has a story that you care deeply about it, all while you are laughing your head off.

Because deep down this is a romance between two very unlikely people. Barbara Stanwyck radiates wit, intelligence and incredible sex appeal as Jean, a role that seems all surface but actually contains a huge amount of depth and shade. She may well be a sort of con-woman with a heart, but the creeping onset of love surprises (and almost confuses) her as much as it might throw off an audience. Not that that ever stops her from being (usually) two steps ahead of everyone around her, a nature that suits perfectly for her revenge act in the second half, where she aims to teach Charles a little humility. Stanwyck’s comic timing is perfect, but it’s the human heart she gives the character that works, and makes us warm to her.

It also makes a superb contrast with Henry Fonda as Charles. Riffing on his screen-image for upright purity (he’s Honest Abe for goodness sake!), Fonda creates a man who is sweet, honest, naïve – but also has an inverted sense of snobbery that comes from being convinced you are usually right. For all his innocence, Charles is surprisingly abrupt when he dismisses his romance from Jean, and his slightly priggish self-satisfaction is evident when he proudly presents his (feeble) card tricks to the card sharps he finds himself on board with. Fonda also proves himself a surprisingly deft physical comedian, a key running gag being Charles’ continual prat falls (a neat metaphor for him both figuratively and literally falling in love with Jean).

Together these two power a lightening-fast series of comic masterpiece scenes from Sturges. But the director is also confident enough to throw in other beats: a stationary single shot of Jean cradling Charles for several minutes (after a semi-pretend shock at discovering his pet snake) sizzles with sexuality. Later Stanwyck delivers Jean’s joy at finding love a heartfelt wonder, which she neatly inverts to heartbreak on her rejection. Her father, played with a delightful wryness by Charles Coburn, has no problem with fleecing people (although of course “Let us be crooked, but never common”) and delights in his ingenuity (cheating) with the cards, but he also has the humanity to warn his daughter about the sometimes unforgiving purity of decent folk.

And those decent folk are quite snobby. The second half of the film gets a gleeful energy from throwing the knowing Jean in amongst a group of upper-class rich snobs, who will believe anything that comes out of someone’s mouth with a British accent. It’s certainly been working for years for “Sir Alfred”, a conman sponger played with twinkling glee by Eric Blore. Jean’s almost deliberately ludicrous story (arrival on a submarine and a hilariously convoluted backstory) gets lapped up – and of course seduces Charles all over again. No wonder he keeps falling over.

The final act – with a deliciously funny final line that deserves to be more famous than it is – makes for a superb cap to what is a marvellously sparkling comedy. It also manages to avoid sentimentality or mawkishness – not a sudden surprise, considering it’s stuffed with people pretending to be what they are not. Sturges’ direction is sharp – even if visually he isn’t the most imaginative director in the world – but the main thing that gives this such zip is the dialogue and the acting. Stanwyck is simply sensational, Fonda just about perfect, and the whole thing is a delight. Surely one of the greatest classic Hollywood comedies of all time.