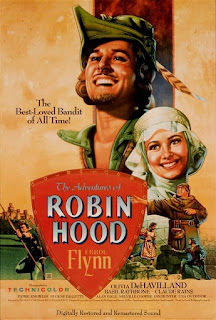 Has a more enjoyable film ever been made? The Adventures of Robin Hood is such a glorious technicolour treat it’s pretty much an archetype of a Hollywood blockbuster. Reportedly the only film in history that had exactly no changes made to it after preview screenings (so much did the audience lap it up), it’s been entertaining people pretty much non-stop since 1938. Never mind its influence on Robin Hood legend – almost every Robin Hood based film or show recycles elements of the plot here – it’s pretty much built up a picture of what a classic Hollywood Olde Medieval England epic is.

It’s Medieval England at the time of the Crusades (actual history is of course no-one’s concern). King Richard’s wicked brother, the greedy Prince John (Claude Rains) is plotting to seize the throne while bis brother languishes in an Austrian dungeon. Up go the taxes – especially on those pesky Saxons who still fill England’s lands, under the yoke of their Norman rulers. Who can stand in the way of John – and his arrogantly ruthless right-hand man Sir Guy of Gisbourne (Basil Rathbone)? Only the Lincoln-green coated Saxon nobleman Robin of Locksley (Errol Flynn), the most upstandingly, thigh-slappingly, decent chap you could imagine. Taking the name Robin Hood, he takes refuge in Sherwood Forest and builds up a group of like-minded fellows who resolve to rob from the rich, give to the poor and protect the realm for Richard. But things get complicated when Robin falls in love with brave and whipper-smart Maid Maran (Olivia de Havilland) – especially as she is the intended of non-other than the wicked Sir Guy of Gisbourne…

Looking like an explosion in a technicolour workshop, The Adventures of Robin Hood is fast-paced, crammed with rollicking action, packed with good lines and played with a knowing wink by a cast of actors clearly having a whale of a time. It’s a prime slice of entertainment, and it succeeds completely. It’s hard to imagine someone not finding something to enjoy here. Sword fights and chases? Check. Romance and flirtation? Check. Some cheeky gags and a hero thumbing his nose at authority? Check. Villains to hiss and heroes to cheer? You better believe it. I don’t think there is a single type in Hollywood history where the cocktail of action and entertainment was mixed better.

The film has two credited directors. William Keighley was the original, who shot the material in the film shot on location. It’s Keighley who helped tee up the atmosphere, and to get the actors to relax into the style of the thing. Crucial sequences showing the characters meeting (including the encounter with Little John) and a large chunk of the middle-act archery contest were Keighley’s work. So, we have him to thank for working in a competition that includes an arrow piecing straight through the middle of another (a stunt put together with a bit of clever wire work and some genuinely gifted archery skills). However, Keighley was less accomplished at shooting action. And to be honest you can see it, during the sequence where Robin and his Merry Men take hostage Gisborne and the Sheriff. It’s fine, but there is a reason why it’s also not a scene anyone particularly remembers from the film. When the shoot returned to Hollywood for the interiors, a new director was sought out to handle the rest – which included all the big fight scenes. 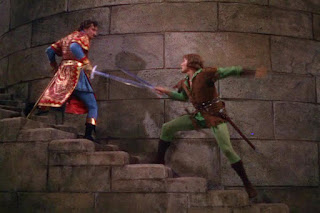 The man they called on was one of the masters of the studio system, Michael Curtiz. A director famed for his dictatorial approach to film-making (hilariously Flynn agreed to the film on condition that it wouldn’t be directed by Curtiz, the relationship between the two having collapsed during earlier collaborations), what Curtiz could do that Keighley couldn’t was add a really visual scale to the action. And it worked a treat – because Curtiz gifted us two of the greatest, instantly recognisible, action showpieces in Hollywood history. Both epic sword fights in Nottingham Castle are down to him, his camera employing crane, tracking and long shots to add an epic quality. He was also full of cool ideas – it’s him we have to thank for a portion of the closing sword fight being shown through shadow play. 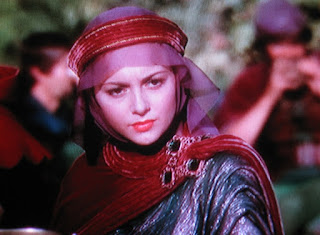 It’s the pace as well that Curtiz really understand. Compare the careful, single shot, used by Keighley for the quarterstaff duel between Robin and Little John. Now admittedly the stakes are lower. But then watch the immediacy and dynamism of Curtiz’s camera moves while Robin fights for his life in Nottingham against dozens of guards, or duels with Sir Guy. The energy – and above all the pace and speed – of these scenes help make them gripping. And it wasn’t just the action. Curtiz bought a romantic jolt of energy to the interplay between Maid Marion and Robin, framing a key scene with a romantic intimacy on the edge of a window sill. While Keighley laid the ground work, it’s arguably Curtiz’ work that makes the film what it is.

Well that and the actors. Errol Flynn was perfectly cast as Robin Hood, the part a wonderful fit for his ability to mix charm with just a hint of rogueish sexuality and cheek. Combine that with his athleticism – some of the stunts he carries out in this film are eye-openingly intense – and you’ve got the man you pretty much cemented the public impression of who Robin Hood was. It’s beyond bizarre to imagine the original choice of actor – James Cagney – playing the role.

Flynn also of course has winning chemistry with Olivia de Havilland. De Havilland uses her great skill to make Maid Marian far more than just a damsel in distress. She’s proactive, plugged in and defiant, convinced of the need for justice and more alert to dangers and opportunities than almost anyone else in the film. 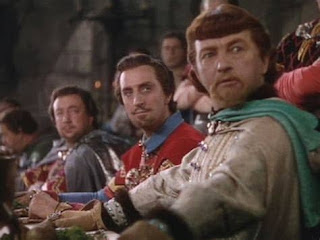 Both of these two go up against one of the finest arrays of baddies I think film has ever seen. Rains is arrogant, aloof and ever-so-slightly camp as the superior Prince John. Rathbone is scowlingly austere and deliciously pleased-with-himself as Sir Guy. And for the chuckles we have the bumbingly cowardly Sheriff, played with comic delight by Melville Cooper. All three of these actors combine perfectly, offering a marvellous troika of villains, each a mirror image of different facets of Flynn’s hero.

It makes for a gloriously entertaining film, all washed down with Erich Wolfgang Korngold’s marvellous symphonic score, the bombast and romantic sweep of the music perfectly counterbalancing the action on screen. Still the greatest of all Robin Hood films, The Adventures of Robin Hood is entertaining no matter when you watch it.