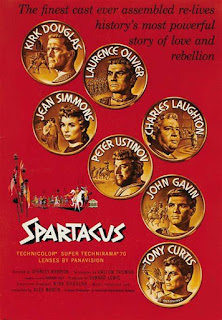 You can’t talk about Spartacus without saying it can you? Did the team working on the film realise that, for all the big names, spectacles and sweeping that the film’s definitive contribution to popular culture would be the sound of a hundred men all claiming to be the slave leader? But it’s the moment you think of more than any other when the film comes up – and there’s not many films that can claim to have contributed such an instantly recognisable moment to our cultural heritage. It’s not the film’s only merit though: this is grand, entertaining, old-school Hollywood epic-film making.

In the last decades of the Roman Republic, Spartacus (Kirk Douglas) is a young man born a slave, purchased by gladiator trainer Batiatus (Peter Ustinov) to learn how to thrill the crowds and kill his opponents. There he falls in love with slave-girl Varinia (Jean Simmons) and clashes with the regime of the training school. Revolt however stirs when rich nobleman Crassus (Laurence Olivier) arrives at the school and demands a fight to the death of his entertainment – as well as purchasing Varinia. In the aftermath, Spartacus leads a revolt – which grows into a huge army that soons puts all of Rome at risk. But a risk is also an opportunity: certainly it is for Crassus, who sees this as his chance to bring the Republic under his control.

Spartacus is a grand piece of film-making, shot on a huge scale, a labour of love for Kirk Douglas as producer. Upset at being denied the lead role in Ben-Hur, Douglas decided to make his own Roman epic – and to make something even grander than that Oscar-winning epic. Everything was thrown at the screen: grand locations, huge sets, star actors and a sweeping epic score. Alex North’s classically tinged score – with it’s distinctive employment of Roman instruments and echoing of both the intimidating splendour of Rome and the bucolic happiness of the liberated slaves – is proper old-school Hollywood score-making, that helps set the scene for the film’s epic sweep.

And Spartacus is epic – and epic entertainment. While it’s possibly a little too long, it knows when to spice up events with a battle, love scene or bit of political skulduggery. There are multiple story lines going on in this film, and interestingly they don’t all intersect. It’s easy to see Spartacus – and his struggle for freedom – as the real story of the film. But for most of the Roman characters, this is an embarrassment or sub-plot. There is a whole other story happening around the struggle to preserve Roman Republicanism – with Crassus as the face of oppression and his opponent Gracchus the slightly soiled but still vaguely democratic face of the old system. Both plots only rarely come together, and while that of Spartacus captures the heart strings, a lot of the film’s narrative drive is in the Roman conspiracies.

Perhaps this is because in the entire rebellion only Spartacus and Varinia qualify as really having personalities. And those personalities are basically flawless. Spartacus is almost saint-like in his nobility, a guy who never does anything wrong and whose only mistake is trusting others in a shifting world. Douglas does a great job of performing a character who is practically a living legend – and he completely convinces as the sort of leader his people would follow to the end. His relationship with Jean Simmons is also touchingly sweet and innocent – the film is very good at capturing the sense of how stunted the emotional lives of slaves have been, and the powerful joy they can find in the freedom of simple intimacies so many of us take for granted.

But the slaves themselves are frequently (whisper it) rather dull. Many of them might as well be sitting around the camp fires singing Kumbaya. Bar a brief moment at the start, no suggestion of taking vengeance raises its head. The liberated slaves sing, clap hands and gaze with joy. Children play and people frolic in the fields. Tony Curtis – good value as Crassus’ ex-bodyman, a learned man and entertainer of children – stages a magic show, with patter that could have come straight out of a Brooklyn street. Other than him, none of the slaves register as personalities. A tint of darkness, or moments of fury or even dangerous rage against their oppressors would have made a world of difference. But this is a simple film, where the slaves are building a utopia.

That’s probably why the film is more interested in the politics of the Romans. It’s certainly where the big name actors end up. Olivier is at his prowling, imperialist best – a heartless slice of ambition determined to bend events to his will. Against him, Charles Laughton with an impish cheek, a slightly corrupted air, as the man-of-the-people. These two conduct their own political battle of cut-and-thrust that Spartacus barely realises is happening. This manoeuvring is the real dramatic heart of the film, powered by these actors strengths (John Gavin and John Dall as their lieutenants look and sound very plodding against the playful archness of Olivier and Laughton).

That’s partly the point of Dalton Trumbo’s script (Douglas famously broke the Hollywood Blacklist by crediting Trumbo for his work on the film). While Rome plays politics, real people are fighting and dying for liberty – and will eventually find themselves crucified with nothing left but their pride and sense of freedom. It’s that feeling that probably lies behind the enduring love for this film.

It is perhaps Kubrick’s most universally beloved film. Interestingly though, it’s also the one Kubrick was least proud of. It’s true the film lacks much of his personal touch. While directed with flair and skill, parts of it could really have been made by any number of directors (not something you could say, for example, about The Shining or Barry Lyndon). Kubrick often quietly, albeit gently, disowned the film (he said he never knew what to say when people asked him about it). It’s the only Kubrick film where he was a “gun for hire”, subservient to the vision of the producer. His interest you feel is in the smaller moments - moments such as Woody Strode's excellent cameo as a Gladiator (many of the strongest moments with the slaves in the tyranny of the Gladiator school, where life is meaningless and cheap). Really, it’s Douglas’ film – it’s similarities to The Vikings for example is striking – and while a poor advert for auteurism, it’s still a great advert for entertainment.

Kubrick’s greater interest in human failings and shades of grey perhaps explains why the Romans emerge as the more interesting characters. Spartacus’ lack of flaws were an intense frustration to him. Perhaps that’s why Peter Ustinov (who won an Oscar) is the films stand-out character. As gladiator owner Batiatus, Ustinov is devious, playful, amoral, ambitious, without principle, dryly witty but somehow still has touches of decency. The most colourful character in the piece is also the one most coated with shades of grey.

It’s an advert for what makes Spartacus lastingly engaging and interesting whenever you watch it – even if the cry of “I’m Spartacus!” and the decency and honour of the slaves is always going to be what stirs the emotions and tugs the heartstrings. Douglas set out to make one of the greatest “sword and sandal” epics. He succeeded.