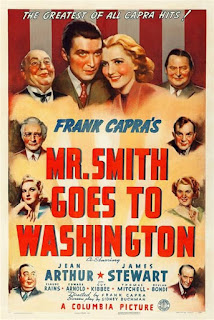 Capra’s film are known, above everything, for their fundamental optimism about life, friendship and the American Way. Few films cemented that opinion more than Mr Smith Goes to Washington, the quintessential “one man in the right place can make a difference” movie. And where else would that one man need to be, but Washington? Where laws are framed and ideals come to die. It’s our hope that those at the heart of the political system are there for the good of the people. Of course, even Capra knew most of them were there to line their pockets and do their best for powerful business interests. So who can blame Capra for a little fantasy where naïve, innocent but morally decent Jefferson Smith decides enough is enough?

In an unnamed mid-Western State (the story the film is based on named it as Montana), the junior senator unexpectantly dies. The Governor (Guy Kibbee) needs a new man. Should he go for a reformer or the latest stooge put forward by political power broker in the State Jim Taylor (Edward Arnold). A tricky choice, so he splits the difference by appointing Boy Rangers leader Jefferson Smith (James Stewart) – because he’s wholesome and clean but also naïve enough to manipulate. Jeff heads to Washington, under the wing of Senator Joseph Paine (Claude Rains) – but Paine is in the pocket of Taylor.

Taylor and his cronies want an appropriation bill forced through that includes a clause to build a dam in their state. The dam will be built on land secretly bought up by Taylor and others, making them a fortune from public money. When Jeff announces in the Senate a bill to host a national boy’s summer camp on that same land, it throws a spanner in the works. Despite threats and bribes, Jeff refuses to go along with the shady deal over the dam, so they set out to destroy his reputation. With the help of his secretary Clarissa Saunders (Jean Arthur), Jeff mounts an epic filibuster in the Senate to clear his name, stop the dam and reveal the political corruption in his state.

Capra’s film is earnest, well-meaning and at times even a little bit sanctimonious and preachy – but it gets away with it because it’s also so energetic, honest and fun. It’s strange watching it today to think that the Senate at the time responded so poorly to it. Leading public figures either denounced it’s view of government and even tried to have it banned. Ironically of course, it probably inspired more people to get involved in Government than any other movie.

That was bad news for the corrupt political machines that ran so many parts of America at the time. Capra’s film is remarkably open-eyed about how these machines worked. Powerful business interests at the centre, with a raft of politicians in their pay – from Governors and senators on down. Jim Taylor – very well played with a swaggering, crude, bullying tone by Edward Arnold – only has to snap his fingers to get things done. During the film he mobilises the press, the police, the fire service and an army of heavies to enforce his will in the state and suppress free speech. The Governor (a neatly tremulous Guy Kibbee) is so firmly in his pocket, he can barely tie his shoe-laces without Taylor directing it. Senator Paine is patrician, dignified and has every inch of respectability – but he is soaking in filth up his neck from contact with Taylor.

It’s this system the film has a quiet anger about. Whatever happened to having “a little bit of plain, ordinary kindness – and a little lookin’ out for the other fella too”? Capra’s sprightly film also makes clear that we both don’t look too closely at how our government is really run and are very quick to hoover up any story we get from our political masters and accept it as gospel. An honest, decent man in the middle of all this is as unlikely a sight as you can imagine.

But that’s what these people get with Jefferson Smith – and discover someone who should be easy to manipulate, but doesn’t understand the rules of the game he’s playing. Instead Jeff thinks they are all there to help other people, not to themselves. Now you can argue, as some critics have, that law-making is the art of compromise – and that once the dam is under way, the benefits it will produce to Jeff’s home State (in terms of employment and energy) will be huge. So why shouldn’t Jeff bow down and move his boys camp in order to let the Bill go through?

Well the point is that Jeff isn’t opposed to the dam – he’s opposed to the corrupt profiteering that will spring out of it, and the way the cesspool of Washington (amongst all those fine monuments he so adoringly looks at) doesn’t care. This is a filibuster campaign to put honesty and decency back into American politics – and what’s not to like about that? It’s a film that firmly believes that one good man in the right place (that’s both Jeff and the President of the Senate, who tacitly encourages him) can change the day and save the country from itself.

There was of course no one better for such a job than Jimmy Stewart (and surely it’s this film that made him “Jimmy” to one and all). Capra had James Stewart in mind from the start – and it’s a perfect role for him, an iconic performance that stands as surely one of his greatest roles. Stewart has the skill to make Jeff endearing but not saccharine, naïve but not frustrating, innocent but not a rube, gentle but determined. Despite its corniness (and some of the film is very corny) you relate to his reverence for Lincoln’s memorial and the Capital. Stewart’s homespun charm is perfect, but it’s matched with the steel he could give characters. There is an adamant quality to his filibuster, his refusal to back down and go along with injustice. The final quarter of the film that deals with the filibuster is quite superb stuff, Stewart delivering some very-well written speeches with commitment, passion and bravura. It’s no understatement to say the film would work half as well as it does without him.

But then the entire film is also a feast of great acting, all sparked by a superb script from Sidney Buchman which mixes razor-sharp dialogue with wonderful speeches. Jean Arthur (who actually gets top billing) is very good as a cynical Washington insider who rediscovers her ideals – and finds her heart melting – under Jeff’s honest influence. Claude Rains gives one of his finest performances as the patrician Paine, a man who tries to close his eyes to his own corruption, but swallows down his own guilt and shame every day. Harry Carey gets a twinkly cameo as an amused and supportive President of the Senate. (Both actors were nominated for the Oscar, but lost to Thomas Mitchell for Stagecoach who also appears here in a fun turn as the drunken but principled reporter Diz).

Capra keeps the pace up perfectly, and his direction handles both smaller scale scenes of romance and idealism, with the larger scale fireworks of the Senate (a superb set, that looks so convincing it’s amazing to think it was built on a sound stage). His biggest trick here is to create a film that, in many ways, is a political lecture, but never makes it feel like one. Instead it delivers it’s messages on truth, justice and the American way with such lightness – but yet such pure decency – that it all works. It helps a great deal that the film doesn’t shy away from the corruption and – apart from a final turn that saves the day – resists melodrama and contrivance. Charming, funny but also thoughtful and committed, Mr Smith Goes to Washington is one of Capra’s very best.