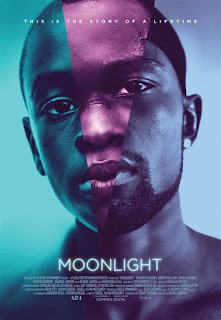 What makes us the people we are? So many things in our environment, personalities and influences can shape the people we are. Imagine, though, how much we might end up twisting and manipulating ourselves, if some of the core parts of what made us who we are, ran against the expectations of our community. It’s the fascinating, poetic heart of Moonlight, Barry Jenkins’ astonishingly tender Oscar-winner, which shows a side of the Black American experience that so rarely makes it to the screen.

In three acts, we see the life of Chiron, from a young child, to a confused teenager to a muscular, adult drug dealer. Played by a different actor at each age, each self-contained half-an-hour-or-so act sees him struggle with understanding who he is, and deal with the impact that different people have on shaping the man he is, from his mother Paula (Naomi Harris), a woman embracing a destructive drug addiction, to his mentor as a young boy, the thoughtful drug dealer Juan (Mahershala Ali) and his caring girlfriend Teresa (Janelle Monáe). Perhaps the core influence however is childhood friend Kevin, the love of Chiron’s life. Because Chiron is struggling with the fact he is gay, in a community where macho masculinity is all important.

Jenkins’ thoughtful and beautifully made film is a wonderful coming-of-age story, that explores deeply emotional territory with sensitivity and care. Jenkins invests the entire story with a beautiful sense of poetry and an echoing, longing sense of sadness. The entire film is constructed of paths not taken, of lost opportunities and painful misunderstandings. It asks profound questions around the people who inspire us, the impact our parents can have, the damaging impact of trying to conform with the world, and the struggle we can take to understand ourselves.

Because the main theme that runs through each act is Chiron’s struggle to come to terms with his homosexuality. As a young boy it’s something he’s beginning to be aware of – and the distance it brings, knowing he’s different from his fellow kids. It’s there in the cruel treatment he receives from his mother. As a young boy, there is the potential that his life could go another way – something that his mentor figure, drug dealer Juan, detects (perhaps, the film subtly implies, because it echoes lost opportunities and ignored feelings in Juan’s own life).

The middle act shows how these chances can be truly lost, how our teenage experiences can shake us. Because Chiron is different in a way that will never gain true acceptance in such a macho environment, where Chiron has it enforced to him time and time again that his sexuality is a weakness, something that dirties him and makes him less than others. Jenkins’ film offers a beautiful view of how a teenager can be made to feel ashamed of themselves and the person they are – to the extent that his reaction after his first sexual experience with his childhood friend Kevin is to apologise. Chiron hasn’t been given the emotional confidence or language to be comfortable with who he is – Juan is the only person who has ever told him that there is nothing wrong with being gay. Chiron instead has to cope with isolation, guilt and shame – emotions that Jenkins’ beautifully structured middle-chapters show, push him more and more towards anger and rage.

It’s perhaps not surprising that Chiron as a young adult has turned himself as much as possible into what his community believes “a man should be”. It’s striking how similar he looks to Juan – from his dress and jewelry, to his muscular manner and his profession. The skinny boy of the first two chapters has become a muscle-bound, intimidating young man. What hasn’t changed is his emotional distance, his isolation. In fact, what has been magnified is his desire to be loved, to feel a connection. A connection that he arguably hasn’t felt for over a decade.

The film can speak to anyone who has had problems fitting in, who feels different from others. Jenkins fits it beautifully into a community he was familiar with, a Black community (there isn’t a single white person anywhere in the film) that values qualities of masculinity and aggression that run counter to Chiron’s own personality, but which he is forced to conform with. This is such a compromised community that the person who understands Chiron most – the drug dealer Juan – is also a big part of the problem, supplying the drugs that are affecting his mother’s life and a leading part of the violent, macho world Chiron lives in.

This mentor relationship is the beating heart of the much of the film – helped by Mahershala Ali’s wonderfully judged (Oscar-winning) performance as Juan. Juan is a man of contrasts, thoughtful and tender, understanding of the internal struggles of a young man (has he dealt with them himself), but also moving in a violent and destructive world, a leading part of the criminal community that dominates Chiron’s world. He offers enough of a lost opportunity for Chiron to have reshaped his life – while also propping up the world that will crush him.

Juan is certainly a big part of destroying Chiron’s mother Paula. Naomi Harris is superbly damaged, raw and uncontrolled as an addict we see disintegrate over the first two chapters until she settles into the fragile older woman plagued with guilt in the final act. This is a mother who offers no love and support to her son, who denigrates him for his differences and builds a world around him that has no love or understanding in it. Her collapse is as much a criticism of the horrors and compromises of this community as it is a terrible warning story.

Jenkins’ film looks phenomenal, with a style that marries poetry and realism. It can feature young boys playing in the park with aggressive naturalness, underscored with Mozart. There is a beautiful running theme of water, cropping up at key moments of Chiron’s life: from the swimming lesson Juan gives him, to the cold water he cleans his face in after a teenage beating, to the adult Chiron largely drinking only water (perhaps to make sure he never slips and reveals too much of himself). It’s a gentle touch – reflected as well in the cool blues that frequently cover the screen, like the wash of water.

The actors portraying Chiron and Kevin are wonderful. The final act revolves around a beautifully played scene between Trevante Rhodes and André Holland as their adult versions, a low-key, but deeply emotional, conversation that sees them carefully skirt round a host of emotions that can never be expressed, partly as neither character as the emotional hinterland to use them.

Jenkin’s film won a deserved Oscar as Best Picture. It deserves it for showing us two worlds we see so little in film: both the working-class Black community, but also the life of a young gay man in modern America. It’s wonderfully judged, low-key, personal and with a slight story carries great emotional force. It gives you far more to think about and consider than you might at first expect, and makes for an eye-opening and deeply involving film.