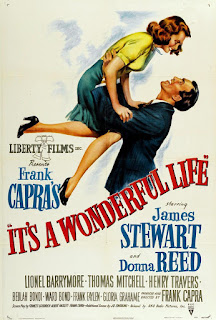 For many people it’s as much a part of Christmas as mince pies and Santa. Any list of the greatest Christmas films of all time – in fact any list of the most beloved films of all time – isn’t complete without It’s a Wonderful Life. Capra’s emotional, heart-warming, seasonal tale encourages us to take a breath and look at the riches in our life, to look past the surface frustrations and disappointments. It seems to have something to say to everyone. There’s a reason why it has been a staple of Christmas for decades.

The small town of Bedford Falls is a place George Bailey (James Stewart) has always dreamed of leaving for a life of adventure. However, circumstances always meant he has stayed in the town, running the family savings and loans business. He’s made a success of the business, raised a family with his wife Mary (Donna Reed – extremely good in an unshowy role), helped half the town into decent affordable homes, and changed his whole community for the better. So why is George standing on a bridge on Christmas Eve, contemplating throwing himself into the river? And will his guardian angel Clarence (Henry Travers) persuade him there are things worth living for?

Capra’s film is very easy to see as a wallow in sentimentality. Certainly, the film is in love with its image of small-town America, here a nirvana of folksy lightness where everyone knows everybody’s name. In reality, America as a whole, even at the time, probably had more in common with Potter’s grasping capitalism or the nightmare vision Clarence conjures of a neon-lit Potterville of loose morals and vice. But the film would never have worked if it was just sickly sentimental – or if it had been a cynical satire for that matter. Instead it works because it is overwhelmingly human, empathy dripping from every pore. It invests us deeply in this whole community and succeeds in making the viewer relate to them at every step.

This is partly because Capra has such a masterful skill for how the little touches can make a story come to life. The loose bannister cap that Bailey keeps dislodging in his home. The drawing Donna has made of George’s offer to lasso the moon. The film is full of small moments of character, that create the over-whelming richness of a whole life. It’s also a story full of charm and genuine feeling for its characters, that understands the pain little griefs and small tragedies have.

Perhaps that’s also one of the reasons for the love people have for it. Because, let’s not forget, this is a film set on the darkest day of its lead character’s life, when he considers ending it all. One of the things I find the most touching about the film is that it never stigmatises depression, guilt or feelings of inadequacy. If someone as universally loved as George can look at his own life as a disappointment, and that this feeling is treated as both reasonable but also mistaken in the best way, it reassures as all not only that we shouldn’t feel guilty for feeling this but hopefully that we are as mistaken as George is. Failure is all in the perception – and It’s a Wonderful Life reminds us that perception is often unreliable when we turn it on ourselves.

Capra’s film relies strongly on our bond with George – so the casting of James Stewart in the role plays off perfectly. Stewart is quite simply superb, completely human and deeply moving. Capra provides Stewart with several striking set-piece speeches (all of which he delivers with aplomb). The entire film is essentially a riff on Stewart’s charm and likeability – but also his everyday quality, the sense that when we watch him we are looking at someone like us. Stewart makes Bailey honest, decent and kind. You can immediately see why people like him. His principles and sense of justice drive him every day to do the right thing – and what makes him such a deeply relatable character is that this so often flies in the face of his own desires and interests. 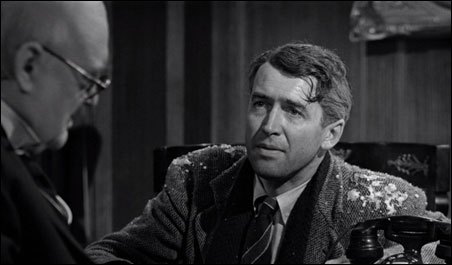 What Capra also understands – and taps into so well here – is the darkness in Stewart. Because someone so like us is surely as likely to suffer from  depression and disappointment as the rest of us. You can never forget this is a man who has dreamed his whole life of leaving this town, of making it as an architect, of forging a broader life for himself. He never wanted to be the pillar of the community and family man he becomes. There is disappointment in Bailey at every turn, however much he treats the world around him with warmth. This isn’t what he wanted. No matter if it has won him love and respect from all around him.

And who hasn’t ever felt that? But we know that deep down – even if he doesn’t always realise it – Bailey is happy with his lot. That if he didn’t care deeply about town, friends and family he would have left years ago. We know he’s a good man: that later he will deeply regret berating his poor befuddled Uncle Billy (a gloriously cuddly Thomas Mitchell) for losing $8k and losing his temper at his wife and children on Christmas Eve. There is a pain for us to see such a good man, a loving man, who we feel we understand, angrily ask his wife why they had so many children. Everyone has lashed out like George – and everyone has, at some time, looked at where their life is and felt “I could have been more than this”. Far fewer people have taken the time to look at all the good alone in their lives and what a good mark they have made on the world.

But that’s the genius of the film. Taking its cue from Dicken’s Christmas Carol (I’d also say Lionel Barrymore’s brilliantly hissable Potter is clearly a version of Bleak House’s vile moneylender Smallweed), effectively Clarence is the Ghost of Christmas Present, showing George what the world would have been like without him. Sure some of this is overblown – Potterville for goodness sake! – but the impact is those personal stories. The brother drowned as a child. The pharmacist imprisoned for manslaughter. The affordable homes never built. The family that never even existed. The mix of science fiction and classic morality tale helps us all to reflect – so many of us have people all around who care for us, whose lives would have not been as rich as they are without us, however much we may disappoint ourselves at times.

That’s perhaps behind the love for the film. It’s about hope, while never closing its eyes to despair. It recognises that sometimes we are not happy – and it tells us that that’s okay, so long as we don’t lose hope. It encourages us to take a look at ourselves in the round and to appreciate the whole picture, not just a part of it. You can call that sentimentality if you want – but at Christmas time this message of hope and love is sometimes exactly what you need.