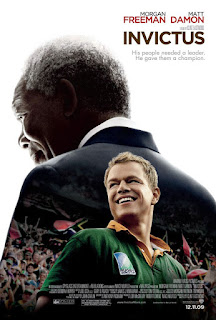 Sometimes, very rarely, a man emerges perfectly suited to his time and place. Perhaps there is no finer example than Nelson Mandela, who emerged from a hellish imprisonment for 27 years on Robben Island to become the first black President of South Africa. The man who could have sparked – and arguably would have had the sympathy of many if he had – a wave of policies that inflicted the same unfairness and injustice on the white population that they had poured onto the black for decades. Instead he chose reconciliation and forgiveness. Can you imagine many other political leaders saying when his people were wrong – and that as their leader, his duty is to tell them so? Invictus would be triumph even if it all it did was remind us of the vision and greatness of Mandela. Fortunately it does more than this.

Like many modern film biographies, the film focuses on a single moment or point in history to explore in microcosm a complex man and his dangerous times. When Mandela (Morgan Freeman) comes to power, South Africa is a country seemingly doomed to division. The whites fear and resent the new power the black population has. The black population is keen on vengeance after years of persecution. Mandela however knows there must be a new way: the hatred propagates only itself, and for the country to move on it must come together as one Rainbow Nation. But in this new nation, there are symbols that are particularly divisive. South Africa’s rugby team, the Springboks their green and gold colours a symbol of apartheid, are the most visible of these targets.

But Mandela understood that, to bring the country together, he must ease the fears of the white population that the end of the apartheid meant an apocalypse for everything they held dear. He pushes to preserves the Springboks name and their colours. He gives the team his backing, and enlists Springbok captain Francois Pienaar (Matt Damon) to help him. Because Mandela knows that the approaching Rugby World Cup, hosted in South Africa, is a glorious opportunity to show the world that the nation is solving its problems. And Mandela is shrewd enough to know that sport can bring people together in ways few other things can. Against all the odds, rugby will become the tool he will use to start the nation healing.

Eastwood’s film is sentimental in the best possible way. It presents a stirring true-life story with a simplicity and honesty that never overpowers the viewer or hammers them over the head. Eastwood also allows space to show in small but telling ways how dangerously divided this country is. From the Presidential staff who start packing up their desks the morning after Mandela’s win, convinced the new President will show them all the door (wrong), to the slow fusing together into one team of Mandela’s personal security staff (black) and their colleagues from the secret service (all white – many of whom arrested Mandela’s colleagues in the past). Even liberal whites like the Pienaar’s keep a black maid as a servant, while ANC party members push for a sweeping aside of every vestige of the old regime.

It’s a dynamite environment in which a single man can make a difference. And with a combination of the sort of patience you learn from 27 years living in a small cell, charm and an unbelievable willingness to turn the other cheek, Mandela is that man. While Eastwood’s film allows beats to remind us he is just a man – his difficult relationship with his family gains a few crucial scenes – the film is also unabashed in its admiration for this titan. And rightly so. Mandela’s smile, his humbleness and his determination to both do the right thing and to avoid provocation is awe-inspiring (his white security guards are stunned that he seems not to hear the abuse he is showered with when attending a rugby game early in his Presidency – he hears and sees everything, their black colleagues assure them).

Morgan Freeman is practically a Hollywood simple of dignity and righteousness – if he can play God he can play Mandela – and his portrayal of the great man is a perfect marriage of actor and subject. Capturing Mandela’s speech patterns and physicality perfectly, he also brilliantly seizes on his character. This is a man who can put anyone at their ease, who humbly speaks of his excitement of meeting Pienaar, who we see putting hours into learning the names and backgrounds of every member of the South Africa Rugby squad. He’s a realist who knows that change needs time, political muscle and sometimes a willingness to cut corners and force the issue – but he’s also a man to whom principle drives all. Freeman’s Oscar-nominated performance is outstanding.

The strength of the film lies in the simple, stirring hope that it derives from seeing the struggle that even small triumphs need. As we see personal relationships begin to grow – from a security team that segregates itself in their office to eventually enjoying a kick-about together – and the growing sense of community in the nation as the world cup draws near, it’s hard not to feel a lump forming in the throat. The film doesn’t overegg this, but allows the moments to speak for themselves.

But it’s also a sport film – possibly the highest profile rugby film since This Sporting Life. The film recreates the drama of that World Cup very well – as well as the intense physicality of rugby as a sport. Matt Damon physically throws himself into it, as well as playing Pienaar with a natural ease carefully allowing his sense of national duty and awareness of being part of something larger than himself to grow (although an Oscar nod is still a little generous). The camera throws us wonderfully into the games, and the film largely manages to avoid the manufactured drama of the game (largely because what happened in real life was often dramatic enough!)

Invictus may not be the most revolutionary film ever made – and catch it in the wrong moment and you might think it was a sentimental journey – but it’s made with a matter-of-fact, low-key charm that I think manages to not overwhelm the heart. Instead it manages to produce a great deal of emotion from its carefully underplaying. With a fantastic performance from Morgan Freeman, it’s a wonderful tribute most of all to a very great man, who changed his country and the world for the better through the power of forgiveness – a power he was able to invest a whole nation with.