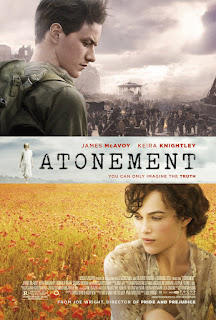 The past is a foreign country. Sadly, it’s not always the case that they do things differently there. Instead, it can be a land of regrets and mistakes that we can never undo. Events that once seemed so certain, end up twisting our lives and shaping our destinies. A single mistake can mean a lifetime of never being able to atone. These are ideas thrillingly explored in Ian McEwan’s novel Atonement, one of the finest in his career. The same ideas carry across to this handsomely mounted adaptation, which looks gorgeous but often tries too hard to impress.

In 1935, the Tallis family owns a grand country house. Precocious Briony Tallis (Saoirse Ronan) is on the cusp of her teenage years, and believes she understands the world perfectly. A budding writer, her imagination, curiosity and romanticism overflow. But her youthful mis-interpretation of the romantic interactions between her sister Cecilia (Keira Knightley) and the housekeeper’s son Robbie Turner (James McAvoy)ends in a tragically mistaken accusation that destroys Robbie’s life. Five years later, Robbie serves as a private during the British retreat from Dunkirk, Cecilia is a nurse in London and Briony is training to become the same – their lives still shaped by those misunderstandings on that fateful night.

Atonement is a film I’m not sure time has been kind to. Released in 2007 to waves of praise (including Oscar nominations and a BAFTA and Golden Globe for Best Film), it has the classic combination of literary adaptation, period beauty and big themes. But re-watching it (and it’s the third time for me), the film rewards less and less. Instead, my overwhelming feeling this time was it was a tricksy, show-off film that – despite some strong performances, in particular from McAvoy and Ronan – strained every second to demonstrate to the viewer that Joe Wright belonged with the big boys as a cinema director.

Constantly, the emotional impact of the film is undermined because nearly every scene has an overwhelming feeling of being ”Directed”. Wright pours buckets of cinematic tricksiness and flair into the film – so much so that it overwhelms the story and drowns out the emotion. With repeat viewings this overt flashiness becomes ever more wearing. Scenes very rarely escape having some directorial invention slathered on them. Direct-to-camera addresses where the background fades to back (giving the air of a confessional). Events unspooling (and at one tiresome moment played in reverse) to illustrate time reversing to allow us to see events from a different perspective. Other visual images seem cliched beyond belief: a divine flash of light behind McAvoy while he struggles against death in Dunkirk or, worst of all, Nurse Briony talking about never being able to shed the guilt from her childhood actions while vigorously washing her hands.

Perhaps most grinding of all is the (Oscar winning) score from Dario Marinelli which hammers home the questionably reality of some of the scenes we are watching (or at least the creative filter that Briony is placing over them) by building in excessive typewriter whirs and clicks into its structure. It hammers home one of the film’s key themes: that at least part of what we are watching is based solely (it is revealed) on the recollections of the much older Briony, now a respected novelist. That perhaps, some of the events are her creative interpretation, wishes or even flat-out invention. This is a neat device, but perhaps one that could have worked better with a framing device to place it into context. Instead the reveal feels tacked on at the end – for all that this is the same approach McEwan takes in the novel (with greater effect).

But then, for all the film faithfully follows the structure of the novel (in a respectful adaptation by Christopher Hampton), too often its warmth and feeling get lost in the showy staging. Although part of the tragedy is that Robbie and Cecilia’s relationship is destroyed before they even get a chance to explore it fully, the chemistry between the two of them isn’t quite there and the film doesn’t quite communicate the bond between them being as deep as it would need to be. So much of this in the book was communicated through interior monologue – and the film refuses to take a second away from its flashiness to compensate for this by allowing the relationship between the two to breathe.

Instead Joe Wright prioritises his directorial effects. For all that his over five-minute tracking shot through the beach of Dunkirk is hugely impressive and dynamic – and it really captures a sense of the madness, despair, fear and confusion of the evacuation – this isn’t a film about Dunkirk. It is a film about a relationship – and using the same flair to make us fully buy into, and invest in, this relationship would perhaps have served the film better. It’s striking that, in the long-term, the most impressive scenes are the quieter ones: Benedict Cumberbatch’s chilling house guest’s subtly ambiguous conversation with Briony’s young cousins, or Robbie and Cecilia meeting in a crowded café after years and struggling to find both the words and body language to communicate feelings they themselves barely understand. In the long term, scenes like this are worth a dozen tracking shots – and demonstrate Wright has real talent behind all the showing off.

But the film is striking, looks wonderful – as a mix of both The Go Between and a war film – and in James McAvoy’s performance has a striking lead. McAvoy’s career was transformed by his work here – boyish charm with a slight air of cockiness under his decency, turned by events into fragility, vulnerability, fear and an anger he can’t quite place into words. Knightley gives one of her best performances – although, as always, even at her best she hasn’t the skill and depth of a Kate Winslet. Or a Saoirse Ronan for that matter, who is outstanding as the young Briony – convinced that she is right and that she understands the world perfectly, but as confused and vulnerable as any child thrown into a world that in fact she doesn’t comprehend.

Atonement has its virtues. But too often these are buried underneath showing off, ambition and tricksiness. Sadly this reduces its effect and leaves it not as successful a film as it should be.