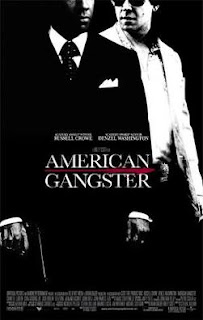 In 1970s New York there was only one organisation that ran crime: the mafia. The idea that anyone else could get a look in was unthinkable: to the cops, the government and the criminals themselves. Frank Lucas (Denzel Washington) was the guy who was going to shake that up: a resident of Harlem and former right-hand man of crime boss “Bumpy” Johnson (Clarence Williams III), Lucas saw an opening to bring in cheap, high-quality drugs from Vietnam (hidden in the temporary coffins of deceased servicemen). With this product he could take over crime in New York – and run it as he thinks it should be run, with the mentality of a FTSE 500 company and a gun. Frank is helped by the fact no one knows who he is. But that is all about to change as honest cop Richie Roberts (Russell Crowe) sets up a task force dedicated to finding, and arresting, the drug kingpins in New York. He’s as surprised as anyone to find the trail leads to Harlem.

Based on a true story, Scott’s American Gangster is assembled with Scott’s usual professionalism and assured touch, using top actors in well-assembled, well-shot scenes. It’s glossy, entertaining and enjoyable. But it’s not quite inspired or stand-out. Despite everything, it doesn’t really show us anything new and lacks either the fire of inspiration or the sort of poetry and energy the likes of Spike Lee, Quentin Tarantino or Steve McQueen could have bought to it. It tells an interesting story, but manages to be pretty much by the numbers – albeit those numbers are flashed up with as much pizzazz, drama and entertainment as you could wish.

The most interesting themes are questions of class and racial politics. The film’s version of Frank Lucas is successful because he runs his crime empire not like a gang but like a company. He dresses plainly and simply, so as not to draw attention (unlike the flamboyant criminals played by Idris Elba and Cuba Gooding Jnr). He talks in terms of supply and demand, brand loyalty and being a chairman. In one particularly well managed scene, he pontificates to his brothers on his ideology of business, excuses himself to walk across the street and shoot a rival in the head, then returns to calmly finish his breakfast. It’s the ideas of Wall Street applied to gangster crime. Lucas is all about bringing a smooth, modern, professional thinking to crime – but with the gun still up his sleeve.

But another reason why Frank Lucas needs to be as professional as he is, is because he’s loathed by all other parts of the criminal system. It’s a system that is racist from top-to-bottom, where black men are unwelcome as anything other than foot-soldiers. The elite criminals – most of them tracing many generations back to Sicily – smile at Frank for his money, but never see him as an equal. Even the government can’t begin to imagine a black man could be running such a huge empire – Robert’s AG boss spews out a racist diatribe, rubbishing any idea that a black man could achieve something the Mafia has failed to do. Frank though is just as wary of the flashy ostentatiousness of most black criminals in New York, telling his brother that the quietest man in the room is the most powerful.

It’s those brothers who Frank relies on – only family can be trusted. They’ll also be his Achilles heel. Because even his most competent brother (played by a sharp Chiwetel Ejiofor) is as much a liability as he is a good lieutenant. His brothers are innocents turned by their brother into tools for his crime empire. Frank hands out beatings to cousins who are unreliable. He’s bitterly disappointed when his nephew chucks in a baseball career because crime looks more fun. As his mother – an impassioned performance from an Oscar-nominated Ruby Dee – tells him, the rest of the family looks to him and follows his lead. There is a clear tension between this family – whose benefactor is also its corrupter – but it doesn’t quite come into focus.

This is partly because the film is covering a lot, and partly because it finds itself falling a bit in love with Frank Lucas. Not surprising when the part is played by Denzel Washington at his most magnetic – if strangely not quite as energised as you might expect. Washington gives Frank a dignity and cool that the real Frank – by all accounts a much cruder, ruder, less able man – never had. The film doesn’t really want to explore the darker side of Frank. Instead it invites us to sympathise with him, as an outsider made good. To feel sorry for him when he makes a fatal error (wearing an ostentatious fur coat to the Ali/Frasier “Fight of the Century” – an act that blows his carefully preserved anonymity). The film doesn’t want us to feel the damage of the drugs Frank is pouring into New York, since it might damage our respect for his triumph against the odds.

The barriers that Frank has to overcome – from arrogant Mafia kingpins, to local crime lords and corrupt cops (Josh Brolin has fun as a prowling bullying detective) – are in the end more interesting than the procedural struggles of Russell Crowe’s Richie Roberts (on solid form). Roberts is also given a rather cliched (and fictional) custody battle that hardly justifies its screentime. The cops definitely get the short end of the stick – and a stronger film might have focused just on Frank Lucas and really explored the struggles of a black man in white crime world, dealing with racism and trying to apply Wall Street ideals to street violence.

American Gangster doesn’t quite succeed with its dark commentary on the American dream – but it’s as entertaining as you could hope and while it lacks in inspiration, it’s also hard to find too much fault with. One of Scott’s most solid works, with a charismatic Washington doing decent work.