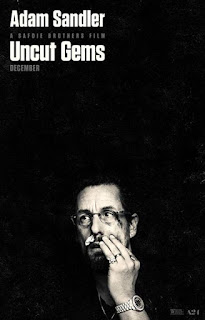 Howard Ratner (Adam Sandler) is a Jewish jewellery dealer in New York. Addicted to gambling, Ratner has a mountain of debts – mostly to his loan shark brother-in-law Arno (Eric Bogasian). Estranged from his wife Dinah (Idina Menzel) and trying to build a new relationship with girlfriend Julia (Julia Fox), Ratner’s life is a mess. His business depends on colleagues like Demany (Lakeith Stanfield) to bring in high-end clients, such as basketball star Kevin Garnett (playing himself). Ratner hopes an auction for a rare uncut diamond from Ethiopia will get him out of the hole. But, after agreeing to loan the diamond as a “good luck charm” to Garnett, Ratner finds himself in a desperate race to get it back in time for the auction, make enough money to clear his debts – and resist the temptation to throw it all on a big accumulator bet on the next basketball game…

The Safdie brothers’ film is an explosion of frantic energy. Shot with hand-held dynamism and cut with adrenalin-fuelled quickness, every scene has life occurring at hundreds of miles an hour, leaving the viewer struggling to keep up. Like Robert Altman walking in Scorsese land, dialogue frequently overlaps, with the buzz of improvisation and rawness of language. The film rips through events with a headlong force, scenes veering from black comedy, to tragedy to violence with unexpected force.

There is an almost Jonsonian or Moliere sprightliness about the film. Ratner feels like a Volpone, a chancer on the make, trying to keep ahead of his schemes long enough to end out on top. The film plays like a dark farce. Often, at the worst possible moments, Ratner’s opponents or friends appear to ruin his current plan. Ratner’s shop is practically a classic farce set, with its backrooms and magnetically controlled door that doesn’t always open when ordered. But it’s a dark farce, which never lets you forget the threat of genuine physical violence.

The Safdie brothers take a superb chance on casting Adam Sandler. With his gallery of grotesques in a low-brow comedies, it’s easy to forget the commitment and transformational quality Sandler brings to any role. With the film teetering towards dark farce, that energy is perfect. Sandler channels the bombast of Al Pacino by way of the sleaze of Gilbert Gottfried, a raspy voiced would-be-but-never-was, a Del Boy of low-rent crime. It’s a high octane, big performance. But it works because Sandler is aware this is a character always performing, and has taken on a persona of such New York Jewishness (the Safdie brothers have said this was their intention) that it almost feels like his true emotional self has been long buried.

He’s a character who struggles with earnestness and honesty – partly because it brings so few benefits to his world, partly because he’s almost forgotten how to behave other than as the high-octane chancer he presents to the world. In many ways, this is very secure role for Sandler, falling very much into his wheelhouse without the crude gags, but with additional tears. Heavily praised by critics – many of whom perhaps couldn’t bear to sit through his more conventional film work – it’s a strong performance, but not a revelation as many suggested. Ratner is an exaggeration and a tour-de-force, but the real stretch for Sandler is in the smaller, quieter moments (of which there are few) where Ratner has to confront the emotional consequences of his appalling choices.

Moments like this are few and far between, amongst the crazed energy of the bulk of the film, but they carry real impact. It would be easy for this jet-black crime dramedy to overlook its heart, but it’s certainly there. Ratner’s relationship with Julia seems to be a typical gold-digger/older man’s folly, but reveals itself to have far greater depths of emotion than first appears. Similarly, the feud between Ratner and his wife is just part of a wider spectrum of genuine affection between them – even if the idea of continuing the marriage is a joke. Even Ratner and his brother-in-law (a world-weary Eric Bogasian) have moments of genuine affection, for all the threat of violence.

The real villain of the piece, if there is one, is Ratner’s own self-destructive streak. He can’t let the chance of a good score pass him by, and his constant habit of shooting himself in the foot and making the wrong call have led him to the brink of destruction. Not that the film is keen to show us too much of this. Interestingly, for a film about a gambling addict, Ratner’s actual bets have a romantic tendency to come off. In fact, for all that he is clearly in dire straits, the film shies away from showing the real damage that addictive gambling can have.

Perhaps it’s because the Safdie brothers clearly feel very protective towards Ratner. For all his wheeler-dealing desperation, the film lends him a perverted sense of nobility. We can see him lose out on a big deal, get punched in the throat, thrown in a fountain and still he keeps on going (Sandler’s fast talking wildness works wonders here). It’s a flaw in the film for me, that it’s nervous of looking at this self-destructive individual with the cold-eyed clarity that the best of the 1970s film this is partly apeing, would do. It’s a bit like making a film about a drunk, but showing every drinking session as being a whale of a time.

The film culminates in a final wide-eyed bet, mixed with a flurried attempted escape from the crooks. The final act throws in some surprising – and affecting – twists to the tale that stands much of what we have been watching on its head. The film’s frenetic style might, at times, make it a hard-watch – it is so eager to impress that it rarely rests but constantly jumps around like an over-active teenager – but it channels Sandler very effectively, and has the sort of edge too many other films can only dream of. Moments try too hard (the bookending shots that burrow, Fincher like, deep into crevices is a flourish too far), but this is still wire-cracker film-making.