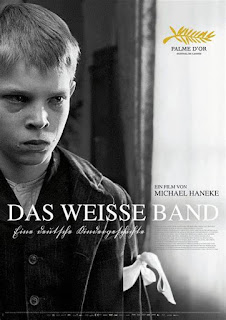 I think it’s fair to say Michael Haneke has a mixed view of humanity. His films look at the dark side of human nature, and the hypocrisies and cruelty underpinning much of our society. The White Ribbon explores these ideas further, a parable focusing on a small German village in the months before World War One, looking at how the life in one village perhaps helped lay the moral and societal groundwork for the younger generation to grow up and embrace Nazism.

In the fictional village of Eichwald, tradition is strong. The town, and its morals, are governed by traditional authority figures. However, each of these figures fails to live up to the values they – often brutally – enforce on the village and, most especially, its children. The Baron (Ulrich Tukur) is a distant autocrat, who talks of a duty of care but treats the villagers like property. The pastor (Burghart Klaußner) preaches morality and abstinence, but bullies his (many) children and condemns utterly even the slightest deviation from his own rules. The doctor (Rainer Bock) is a studious clinician, who humiliates and devalues his lover, the town’s midwife (Susanne Lothar), and sexually abuses his teenage daughter Anna (Roane Duran). In late 1913, a series of unexplained and increasingly violent events occur, from an attempt to cripple the doctor to arson, kidnap, theft and the beating of the midwife’s handicapped son. The perpetrators remain a mystery – one which the decent but ineffectual teacher (Christian Friedel) attempts to uncover – his older self (Ernst Jacobi) providing an, at times, naïve narration.

Haneke’s aim is to explore the conditions that led a generation to embrace a regime that promotes the unthinkable. While it’s clear that a future of Hitler and fascism – neither mentioned once in the film – hover over everything, this parable could serve for any totalitarian regime. Haneke is not interested in specifics. What fascinates the director is the creation of a mind-set that enables people to willingly align themselves with horrific actions. The brilliance of The White Ribbon is that could be as easily applied to Stalinism and the Khmer Rouge as it can to Nazism.

Shot in a beautiful black-and-white, the film presents a series of striking images, imbued with an immense psychological depth and haunting sense of dread. Haneke’s mastery of visual imagery is sublime, and he paces the film perfectly. While it is easy to claim the film is slow – and it does take its time – the deliberation of the pacing, and the precision of each shot, is all part of giving the film its thematic weight. It’s like a medieval passion play, with every moment giving depth to the whole. 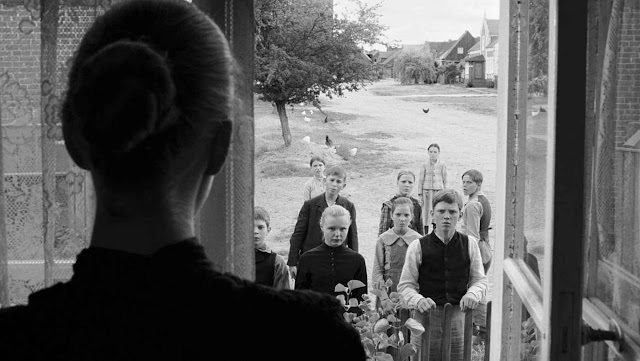 The film’s focus is on the children – tellingly, only characters below the age of about 20 are named. It’s their faces the camera returns to time and again – and the film is set in a key moment of many of their lives, where disillusionment with adults begin. The age when they begin to realise their parents are far from perfect and even hypocritical. The film more than suggests that it is the children – working in some combination or alone – responsible for the crimes that take place in the village. Their motivations range from anger and resentment to despair and a longing for escape.

Many of these events centre around the pastor’s family. Played with a perfect emotional austerity by Burghart Klaußner, the pastor judges all around him as unworthy, with his children suffering the brunt of his discipline. It’s easy to see he is overly harsh, hypocritical (the sheer number of his children suggests he hasn’t worked hard to suppress his own sexual feelings) and unjust. His son is tied to his bed while he sleeps to prevent “impure touching” and his daughter is blamed, and publicly humiliated by him, for a school disturbance she is trying to stop. He’s a father who demands respect but cannot inspire love.

Almost worst of all, he requires his children to wear a white ribbon, to constantly remind them of moral standards they have failed to live up to. These acts of stigmatisation and bullying are not balanced with any outward affection – whatever he may actually feel, the pastor is far too restrained to show any warmth – and Haneke demonstrates his children are taking all the wrong lessons from him. The learn to be cold, distant and judgemental, and that strength is vital and weaknesses are not to be tolerated: they beat out individual thinking, and replace it with cold conformity. A basically good man – and the pastor clearly believes he is doing his best to protect his children – rears children who see others as inferior and different, and stigmatisation as an essential part of life.

The whole village lives in medieval thrall to the baron. You could be believe this village was hundreds of years in the past, not a single century. The villagers slave on the baron’s fields, meekly tugging their forelocks to him in church. The baron takes unilateral decisions affecting everyone’s lives. His own family life is cold – his wife doesn’t love him (and her sexual, not romantic, faithfulness is the only thing that matters to him), while his weak young son is the victim of at least two crimes. It’s a pattern of distant, selfish authorities who believe they work for the good of the community, while taking everything they can from it. 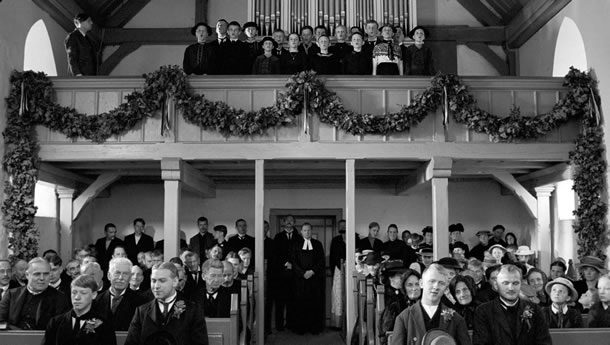 But then corruption is also endemic at the home. Rainer Bock gives a chilling performance as the local doctor, respected by the community for his dedication, who treats those closest to him with disdain at best, and abusive cruelty at worst. A controlling, cruel man, the doctor is the clearest example in the film of the hypocrisy of the older generation, demanding respect, decency and obedience from the younger, while treating them with selfish vileness.

Haneke’s film is a grim – and disturbing – study of this sort of everyday horror and it effect on the psyche. The dehumanisation of the young is clear, and the growing casual cruelty they begin to dish out to others becomes more and more striking. The film taps into a Wyndhamish fear of the young, the children moving in packs, their respectful words not matching their air of menace. This unsettling feeling only grows because, for many of the crimes, we are never given a firm answer to who carries them out (although we can guess). Saying that, at least three acts of violence and sabotage are explicitly shown, all of them carried out by the young – enough for the viewer to suspect the others can be tied to the same generation.

The film does pepper itself with touches of hope – enough to suggest not everyone is destined to succumb to malevolent forces. The schoolteacher – sweetly played by Christian Friedel – is well-meaning, if ineffectual, and his courtship of the baron’s dismissed nanny Eva (an endearing Leonie Benesch) has a charming bashfulness. (Although the fact the couple are brow-beaten into postponing their marriage by her domineering father reminds us of the dominance of the older generation). After the pastor’s pet bird is killed (by his daughter, who crucifies the creature on his desk), he is moved to tears when his youngest son offers him his own pet bird to make him feel better (although inevitably the offer only promotes a curt “thank you” from the Pastor while his son is in the room). The women of the older generation all show signs for reluctance or discontent with the behaviour of the patriarchs, although any protest is of course in vain.

It’s touches like this that prevent Haneke’s film from being a lecture. The village isn’t inherently bad, just terribly misguided. This all enforces the universality of the film. You’re kidding yourself if you think this could only happen in Germany. These generational clashes and the twisting of an entire generation could happen anywhere. The world is what we make it, and the white ribbons that help us remember our innocence can just as easily be used to categorise us as the worthy and the unworthy. Haneke’s film is a brilliant, profound and challenging piece of work that rewards thought, analysis and rewatching. Quite possibly his masterpiece.