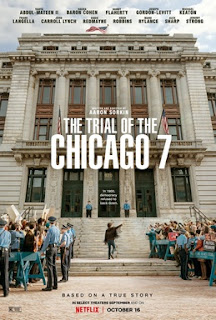 Aaron Sorkin’s work celebrates the great liberal possibilities of America. Is there any writer who has more faith in the institutions of the American state – while being so doubtful of many of the actual people running those institutions? You can imagine Sorkin sees more than a bit of himself in Abbie Hoffman, jocular prankster and wordsmith, angry at his country in the way only someone who really loves it can be. This idea is at the heart of Sorkin’s biopic of the trial of seven activists for promoting violence in the build-up to the Democratic convention of 1968 in Chicago.

Vietnam is in full swing with young men dying in their thousands to defend a cause many are starting to believe isn’t worth it. Nixon has just been elected – and his government wants to make an example of these left-wing, hippies he believes are drowning out “the silent majority”. Student leaders Tom Hayden (Eddie Redmayne) and Rennie Davis (Alex Sharp), hippie activists Abbie Hoffman (Sacha Baron Cohen) and Jerry Rubin (Jeremy Strong), and pacifist David Dellinger (John Carroll Lynch) are arraigned in court for conspiracy to incite a riot, facing a ten year prison sentence. Black Panther Bobby Seale (Yahya Abdul-Mateen II), who wasn’t in Chicago at the time, is thrown in to make them look more threatening. With radical lawyer William Kunstler (Mark Rylance) in their corner, the defendants deal with a slanted case from the government, being backed all the way by the judge Julius Hoffman (Frank Langella) who can’t hide his contempt for them.

The Trial of the Chicago 7 feels like it’s on the cusp of making a grand statement about the rights and liberties of Americans, at a time of great civil unrest. With the country more divided now than it’s  ever been since the events of the film, this should be a timely message. But somehow the film doesn’t quite manage to deliver it. There is too much going on – an attempt to cover divisions in the left and counter-culture, the events in Chicago in 1968, the trial, clashes outside of court – it’s almost as if Sorkin the director has failed to marshal Sorkin the writer into making a clear and coherent thematic point. Instead the film becomes a chronicle of shocking courtroom events, affecting, but not as earth-shaking as it should be.

Part of this is the fragmented script. An occasional device is used, whereby Hoffman turns the events of the trial into a lively stand-up routine at some unspecified future point. This is a pretty neat idea as a framing device – however it only pops up at odd moments rather than giving a spine to the film (as well as missing the chance to filter events through the perception of one member of its sprawling cast). You end up thinking it’s just Sorkin the writer coming up with a way of giving us information Sorkin the director can’t work out how to do visually.

This tends to affect a lot of the stuff outside of the courtroom. Sorkin’s dialogue is surprisingly plodding here, too often ticking the boxes or establishing backstory and motivation that will play out later. He has his moments and his gift for capturing revealing details make for brilliantly inspired speeches and dialogue riffs that reveal acres of character while feeling very light. But, considering what he is capable with (and could have done with this material) it feels like autopilot.

That’s the problem here: it’s a little too pedestrian. Only an argument between frustrated liberal Hayden and his lawyer Kuntsler captures something of the dynamic pace of Sorkin at his best. Other scenes – such as an out of courtroom scene between decent just-doing-my-job prosecutor Richard Schulz (a low-key but very good Gordon-Levitt) and Hoffman and Rudin – are a little too on-the-nose in making their points about liberty, truth and justice.

The strongest moments by far are in the courtroom – and the true-life staggering lack of proper procedure followed there. The film is rightly angry, without tipping too much into outright preaching. It’s shocking to see how little the rights of the defendants were respected. Much of this came from the attitude of the judge, Julius Hoffman: a traditionalist, his contempt for the defendants clear throughout, handing out contempt of court charges like sweeties. Frank Langella stands out as a man so convinced of his own morality – and so locked into his own certainty about right and wrong – that he is completely unaware many of his rulings are biased and is deeply hurt at being accused of racial imbalance, while having the only black defendant literally bound and gagged.

Yahya Abdul-Mateen II is superb as Bobby Searle, the Black Panther leader furious at being roped into the trial. Searle loudly – and vigorously – protests the trial has not been delayed to allow his lawyer to attend and that he has been refused (consistently) by the judge his right to represent himself. The treatment of him is shocking and appalling. But it feels like no attempt is made to put this in wider context either of civil rights at the time or in America since. And that feels like a major miss. We’re only a few degrees from the same effectively happening today.

This is part of the film’s general problem in finding its real focus, or wider context. I suspect its heart is probably in the views expressed by Hoffman on the stand – particularly those around not having his thoughts on trial before – but this film is too scatter-gun.

What the film does do well is with the quality of its performances. Sorkin may be a rather a visually flat director – his shooting of the convention riots completely fails to conceal the lack of budget – but he encourages great work from actors. Redmayne and Cohen give skilled performances as the acceptable and radical faces of left-wing politics. Strong is wonderful as a hippie with a firm sense of right and wrong, while Carroll Lynch is great as a pacifist driven to the edge. Mark Rylance excels as radical lawyer Kunstler, softly spoken but passionate, who brings fire to proceedings.

It’s a shame though that The Trial of the Chicago 7 settles for mostly being a walk-through of the trial. An attempt to really capture a sense of the deeper politics gets lost, and the failure of the film to really draw parallels with today or place these events in their wider context feels like a missed opportunity. Even the film’s end captions don’t give you as much information as you would hope – especially telling considering its abrupt ending. A well-meaning effort, but a middle-brow film.