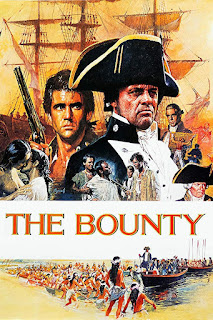 The story of the mutiny on The Bounty has intrigued for centuries. It’s been made into plays, novels and no fewer than three films. Most versions have been inspired by a 1932 novel that painted Bligh as an ogre and Christian as a matinee idol. That image was cemented by the classic Best Picture winning Laughton/Gable version. The real story is far more intriguing – and operates much more in shades of grey – and this 1984 film tries to find a middle ground, with mixed success.

In real life, Bligh was a prickly, difficult but fundamentally decent man, who had worked his way up the naval ranks through merit. He was a superb sailor – as seen by his feat of navigating a small open boat of loyalists over hundreds of miles back to a British port. Cleared of any guilt for the mutiny, he had a successful career and retired as Vice Admiral. Fletcher Christian, on the other hand, was an entitled young man who owed everything to his rich family, rather than merit. The truth has been lost in fictionalised versions who were devil and saint. The truth was far more complex.

This film was a long-standing dream of David Lean, who planned the film for many years, before pulling out at the last moment. The script was written by long-time collaborator Robert Bolt (although ill health meant it was finished by an uncredited Melvyn Bragg). Producer Dino de Laurentis – not wanting to write off the money invested – bought in Australian Roger Donaldson to direct. The final product is a competent, if uninspired, middle-brow history film with a slight air of stodge, and a haunting – if incredibly 80s – electronic score from Vangelis. Where the film really lucked out is the superb cast of actors assembled, with Gibson on the cusp of mega stardom and the cast stuffed with future Oscar winners and nominees.

Anthony Hopkins had been attached to the film for almost seven years, and his carefully researched performance as Bligh is what really gives makes the film work. He gets closer to the personality of the real Bligh than anyone else ever has. Awkward, shy, uneasy with men under his command, insecure at his poor background and the West Country burr to his accent, Hopkins’ Bligh is a world away from a bad man. But he is a demanding and rigid leader, who inspires fear but not respect. He’s far from cruel, but he’s short-tempered, inflexible and has trouble empathising. All too often, he relies on his position alone to ensure obedience, rather than building respect. You sympathise with him, at the same time becoming deeply frustrated at his intransigence. You can understand why many would find him an extremely difficult man to work with (let alone work for).

Fletcher Christian is young, naïve and impetuous, a man whose experiences in Tahiti lead him to become surly and impatient with the confines of a naval life. Gibson later said he felt the film didn’t go far enough to depict Christian as selfish and motivated by a desire for the ‘good life’, and the film does try to show him standing up for the crew against Bligh’s demands for perfection. But Gibson is willing to embrace Christian’s darkness. He hurls himself into the (historically attested) near mental collapse, consumed with violent and unpredictable emotion, that Christian demonstrated during the mutiny, losing all control of himself in an explosion of self-pity and frustration.

The film’s highpoints revolve invariably around these actors. Hopkins’ demanding Bligh sets the tone on the ship. The roots of the mutiny can be seen in Bligh’s public bawling out (and demotion) of his first officer Mr Fryer (a disdainful Daniel Day-Lewis) in front of the entire ship, setting a precedent for disrespect. Every action he intends to build spirit and health in the crew has the exact opposite effect (from pushing them to excel, to enforced dancing sessions for exercise). Hopkins is perfect as man believing he is acting for the best but constantly getting the tone wrong, either too distant and reserved to inspire affection, or too enraged to inspire loyalty. Similarly Gibson, in the less intriguing part, really sells the growing self-absorption of Christian, especially his feckless weakness, easily manipulated into actions that go a step beyond his desires (Phil Davis is very good as a darkly Iago-ish Ned Young, using Christian’s popularity to his own ends).

However, the film itself is a little too traditional. Using Bligh’s trial (all captains who lost their ship were placed on trial to judge their responsibility) as a framing device brings us slightly too many interjections of the “and then you did this” variety – even if it allows actors as impressive as Olivier and Edward Fox to narrate us through the film. This stodgy structure carries us into a narrative that is professionally handled but lacks inspiration, ticking off events but not giving them a force outside of the performances of the actors. The film is competently but not inspiringly made, and never quite captures the sense of the epic that the location and scale should bring.

Perhaps this is because a true-to-life version of the mutiny is a little less traditionally dramatic. Despite some truly impressive performances from the leads (and the rest of the superbly chosen cast), it never quite shakes off the feeling of being a history lesson.