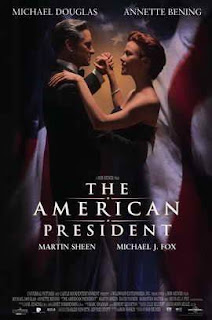 Taken solely on its own merits, The American President is a charming, witty romantic comedy which makes some shrewd (liberal-tinged) comments about American politics. But no-one is ever going to take The American President on its own merits. Because this Sorkin-scripted bundle of joy is so clearly a dry-run for The West Wing, it’s hard to watch it without spotting the roots of it here: everything from shared characters to scraps of dialogue. Perhaps only M*A*S*H stands with this film as so dwarfed by its spin-off.

President Andrew Shepherd (Michael Douglas) is a widower, raising his daughter Lucy (Shawna Waldron). Heading into the third year of his first term, he’s got a domestic agenda dominated by his new crime bill (although Shepherd won’t risk increasing gun controls). Charming, articulate and passionate – he’s also lonely. But his life changes when he falls for environmental lobbyist Sydney Ellen Wade (Annette Bening), their courtship seeing them fumble through “boy-meets-girl” when boy just happens to be the most powerful man in the world. Will the President’s popularity survive him dating someone outspoken and passionate? Or will it be a tool for his Republican rival Senator Bob Rumson (Richard Dreyfuss) to hit him on everything from family values to patriotism?

It’s impossible not to enjoy The American President. Sorkin’s playful, articulate and smart dialogue is of course an absolute triumph. The cast are extremely well-chosen. Few actors look as damn Presidential as Michael Douglas, not to mention carrying with them an air of impassioned authority and commanding bonhomie. Annette Bening is spot-on as exactly the sort of feisty and intelligent woman that would attract a liberal minded President, but turn off pundits and regular people. Martin Sheen was obviously so comfortable with Sorkin’s dialogue style that promotion to the President seemed inevitable (seriously it’s very odd watching the film and seeing Sheen not being treated like the President!). Michael J Fox’s entire career was revitalised by Sorkin tapping into the frantic, fast-paced comic energy that is the actor’s forte.

Rob Reiner’s direction is fresh, relaxed and perfectly complements the dialogue. We get a few West Wing style walk-and-talks (does this make Reiner the inventor of it?). The film superbly balances romantic comedy with serious political discussion on military intervention and proportional response (“the least Presidential thing I do”), the environment and gun control. It also gets a neat idea of the shady, and dirty, business of generating votes in the House – and the deals that need to be done to secure legislation. Reiner gets great stuff from the actors (Sorkin didn’t question his casting, since so many of them ended up in The West Wing) and keeps the momentum up beautifully.

The film has a lovely Capra-esque feel to it. Sorkin is even witty enough to lean on this by having Sydney discuss Capra openly with a White House security guard – also a lovely moment to establish Sydney’s genuineness and openness, as compared to the jaded I-don’t-care attitude of her colleague. There is a real feel in it – and of course this optimism carries across to The West Wing – that good people in the right place can change the world. That decency and compassion can trump (so to speak) the cynicism of Washington insiders. (The idea appeals to everyone – what is Donald Trump but a nightmare version of a plain-speaking man in Washington who says what he thinks?).

Balanced with some lovely comedy, it works extremely well. Along with the debate, Sorkin has a great feeling for the absurdity of the Leader of the Free World trying to work out how he can behave like a regular Joe and ask a girl out on a date. Simple ideas, from sending flowers to the etiquette of having someone stay over, are laced with difficulties. The film gets a wonderful sense of how the public eye can unjustly tear people apart – all drummed up by Dreyfuss’ eminently hissable villain.

There is some great chemistry between Douglas and Bening. Douglas is at possibly his most charming and authoritative here, effortlessly selling the lightness but also the powerfully effective speeches Sorkin crafts for him (his final press conference speech that effectively closes the film is a barnstormer). Bening, as well as being perfectly cast, walks a neat line between serious professional and girlish crush, that comes across extremely well.

It’s hard though, for all the film’s romantic charm, not to look at it through the filter of The West Wing. It’s both a first pass, and a historical curiosity. Sorkin recycled many of the ideas touched upon here (most noticeably Sheen’s President would spend an entire episode discussing proportional responses) and also expanded several characters. Douglas’ teacher turned President, widely read and with a liberal outlook, is a clear forerunner of Bartlett. Sheen himself plays a character who is all but Leo. Fox plays a character combining elements of Josh and Toby. Anna Deavere Smith is a CJ without those distinctive touches Allison Janney bought to the role. Names, plot developments, concepts are all recycled. Stylistic flourishes in the writing match.

The American President isn’t as good as The West Wing of course – few things are. But as a boiled down, Hollywood version with a romantic twist, it’s still pretty damn good.