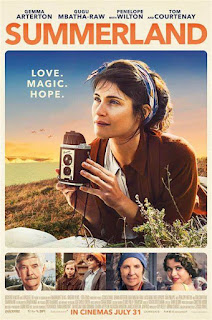 As London is suffering under the Blitz, in a sunny village in Kent reclusive writer Alice Lamb (Gemma Arterton) has her world turned upside down when she is forced to take in young evacuee Frank (Lucas Bond). Depressed and lonely after the collapse of her relationship with the glamourous Vera (Gugu Mbatha-Raw) at college, Alice has shut herself off and leads a solitary life. So it surprises her when she finds her heart thawing for Frank – though not as much as she will be by other revelations.

Jessica Swale has a successful career as a playwright. Several of her plays look at the place of women in history. Blue Stockings was a fascinating (and highly popular) story of female undergraduates in the late Victorian era, smart enough to excel academically but seen as second-class citizens in Cambridge. Nell Gwyn rehabilitated Charles II’s mistress as an intelligent and caring woman and a talented writer and actress. Summerland follows some of these themes – focusing on a lonely lesbian in the 1940s who, with her unconventional interests and academic leanings, is out of touch with her time. But Summerland softens this up by covering the whole story in a dreamy, luscious warmth where everything works out fine and acceptance and reconciliation is the name of the game. It’s both far less interesting than Swale’s stage work and also just as enjoyable.

Not there’s anything wrong with a a bit of cosiness in film. But Summerland is so relentlessly feel-good you end up missing a little bit of bite. Could there not be one character who questions Alice’s sexuality (which even by the 1970s, where Penelope Wilton plays an older version of the character, was hardly welcomed with open arms)? Surely in this seaside town of Kent there would be whisperings of a sort around the village’s multicultural population? Would the colour of Vera’s skin cause no comment from anyone at Cambridge or elsewhere? There are darker societal issues that could have been explored here that just aren’t touched on. I suspect the film is going for a “colour blind” casting, which works in theatre and with older time periods, but seems a bit more awkward when applied to a time period when race was a very real issue. You’d get a ton more social commentary from an episode of Call the Midwife which somehow feels a bit wrong.

But then the film isn’t trying to make a social comment, but is trying to be a bit of escapism. On that score it works very well indeed. With gorgeous Kent scenery, wartime Britain looks like the sort of idyllic Sunday tea-time drama-land you’d love to live in. The fundamental decency of everyone is somehow rather reassuring – even town gossip and busybody Sian Phillips has a heart of gold – and the film bubbles along through a series of events that are both utterly predictable (and at times hugely implausible) and also strangely reassuring. Because you could figure out most of the film early on, you never need worry.

It’s given a great deal of energy by Gemma Arterton’s performance of bad-tempered misanthropy, which of course hides great reservoirs of love and warmth for humanity. Arterton has some beautiful comic timing (an early scene where it appears she is using a ration coupon to buy chocolate for a child without coupons, only to trouser it herself is perfectly done, and probably the film’s highpoint) but also really succeeds in demonstrating the emotional trauma and pain Alice is experiencing. There is a beautiful lightness about how she opens up to Frank (scenes that are of course hugely predictable but still delivered with a genuineness and sweetness that really works).

The flashbacks allow a sun-kissed romance between Alice and Vera to play out, and leave enough questions to keep us guessing (for a bit) as to how this relationship failed to flower. (Needless to say, despite a brief line about flying in the face of society, we never see for a fraction of a second that anyone has any problem with this completely public relationship). Vera is warmly played by Gugu Mbatha-Raw, who brings a radiant life to the part. (A fun moment for Swale watchers – Arterton and Mbatha-Raw both played Nell Gwyn in Swale’s play.)

Summerland throws in a bit of thematic depth around a hunt for Fata Morgana mirages – the focus of Alice’s latest book – and the possibility that these cloud-based mirages of castles carry some sort of spiritual message from the afterlife. But this also serves as part of the film’s easy solving of problems. Any obstructions to the characters’ happiness are swept aside, either by not being mentioned or by the narrative swooping in (one offscreen “character” is easily dispatched, so that we feel no conflicted guilt at their existence getting in the way of the resolution). But this is a film that is offering a light, simple, gentle, escapist story. Nothing remotely challenging – or even really hugely dynamic – happens in it, but for those looking for Covid escape, Swale’s escapist, sweet film debut is worth a look.