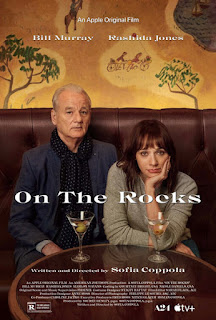 There is often a special bond between fathers and daughters. And it’s one that can be challenged if the father is “replaced” by a husband. After all, nobody wants to go from being the main man to second best. But how complex can this become when the father himself has a track record of selfishness and philandering? And is that the best person for the daughter to turn to when she starts to have doubts about her own husband? In Sofia Coppola’s gentle, light-weight film, Laura (Rashida Jones) reconnects with her roguish millionaire father Felix (Bill Murray), a successful retired art dealer, as she becomes increasingly worried that her husband Dean (Marlon Wayans) is having an affair with his attractive younger colleague Fiona (Jessica Henwick).

Coppola’s new film is an entertaining, low-key family and relationship drama that’s as light as a puff of air. Recycling many familiar ideas from her previous films – in particular the idea of women who seemingly “have it all” but are feeling discontented and trapped in their lives – it spins off into a fairly gentle parable of how doubts and insecurities can take over our lives, which mainly serves as a lovely little showpiece for two very engaging actors to entertainingly do their thing.

Rashida Jones balances the trickier part as a woman who’s half endearingly fond of her fun-loving dad, half infuriated and damaged by the way he wrecked his marriage to her mother and ruined her childhood (it seems her sister and mother are no longer on speaking terms with him). At the same time, she’s keen to hold onto her successful writing career and family life – while also facing an existential crisis as she feels herself becoming more and more stuck in a rut. There are distant echoes of the lack of focus Scarlett Johansson’s character felt in Lost in Translation, the many lonely women running the house in The Beguiled, or the rich girls cut adrift in The Bling Ring or Marie Antoinette.

Into all this drops the bombshell of her husband’s possible infidelity. Coppola gently uses this as a subtle investigation of human nature. Is infidelity and betrayal something all people have as common possibilities? Or does a history of infidelity in our families make us more ready to see it everywhere? Gentle is the word, as the film doesn’t really labour any of these points – perhaps worried that to do so would take it into deeper waters than it has the nerves to handle – and prefers to keep the mood light and frothy. This does mean that when – eventually – emotional moments come, they come rather from nothing, and a braver film would have balanced better the lightness of father and daughter chasing after a (possibly) cheating husband, with tension between that same father and daughter over his appalling past behaviour.

But then, the film perhaps falls rather in love with Bill Murray – and genuinely it’s pretty hard not to. Sofia Coppola again provides Murray with a part designed to match all his strengths. A charming performer, it’s very hard (near impossible) not to like Murray and as he coasts through the film with relaxed cool, arching an eyebrow there, a touch of glib lightness here, investing certain lines with a saggy sadness, others with a playful childishness, you’ll enjoy every moment. Murray makes perfect sense as the ageing roué and cad, who has lived his life entirely for his own pleasure, and now is conducted by chauffeur from hotel to hotel, flirting with any woman who crosses his path.

It’s a delightful performance, with several scene stealing moments – not least when Felix is pulled over by the cops and charms his way out of a ticket with confidence, a bottomless contact book and charm. The cops even push-start his showy old sports car. Of course it’s the ultimate display of white privilege: I’m interested if Dean would have had similar success if it was him. The film shies away from any commentary on race at all, which feels like a missed opportunity. Does Dean put so many hours into work because he needs to prove himself in the ways people like Felix never had to? A different film might have wondered if sub-consciously Felix was even more jealous and concerned about losing his daughter to a black man. But these are areas the film chooses not to go into.

Instead it largely settles for being a charming meander, centred around Murray’s character, that doesn’t want you to look to closely and realise what a selfish cad he really is. Of course the film is really about Felix’s regrets about not having the relationship he would like to have with his children (and Murray more than gets this across with his skilful suggestion of sadness behind the eyes), but even this is a beat the film very lightly taps. What you end up with is a very light, almost whimsical film that moves through a series of events that wind up feeling rather inconsequential. A puff of air you feel would blow the film apart.