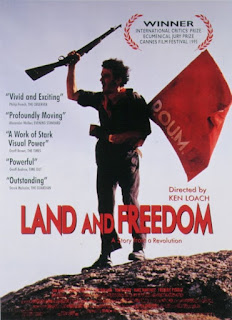 What do we really know about our elders? After David Carr passes away, his granddaughter finds a box full of memories from his time as a young man (Ian Hart) who went to Spain in 1936 to fight against fascism. His granddaughter uncovers a whole side of her radical grandfather she never knew – his passions, his love and the reasons for his disillusionment with the communist party.

If there was someone who was going to make a film about the Spanish Civil War, it would be Ken Loach. The Spanish Civil War is a totemic event for left-wing politics, where the dream of a truly commune-based left-wing government in Europe, by the people for the people, died in a long civil war with right-wing military forces. Loach’s film hums with anger at this missed opportunity and fury at the way these crusaders for justice were left high and dry by both the rest of Europe, and the Russian-controlled forces that should have been on their side.

The Spanish Civil War is a war that it’s easy to slightly forget – a dress rehearsal for World War Two but with a different result. It’s striking that this is one of the very few films – perhaps the only film – to really tackle it. Perhaps that’s because, for many, it’s a hazy and confusing combat with no clear goodies and baddies. On one side the left-wing forces were riddled with internal conflict, with many in thrall to Stalin, while the right-wing forces were anti-Stalin (good) but fascist (very bad). It’s a war that ended with an elected government overthrown in a military coup, tacitly endorsed by the Allied powers – not something that fits well with our narrative of the World War Two era.

It’s clearly a war where Loach has picked a side. His sympathies – and the film’s – are certainly not with the leadership of the communist party, who are portrayed as heartless, two-faced and only concerned with assuring Soviet control over the country. Instead he sides with the common working-class man, fighting in the trenches, full of idealistic passion and righteous anger. Loach’s film is unashamedly political, awash with ideas and idealism.

Not many other films feature at their heart an impassioned, semi-improvised, debate on the merits of forming a commune and economic self-determination. This scene, the key moment in the film, really works by the way, with the actors throwing in their contributions alongside extras, many of them veteran Spanish trade unionists. You can question the naivety of it – and also the way, as often, Loach tends to paint compromise as a vice nearly as bad as betrayal – but it makes for surprisingly compelling viewing. Because, if nothing else, it’s clear everyone, from the director down, really believes in the virtues of the politics being offered and the hope they bring – and that’s infectious.

It’s also because Loach is a highly skilled director who has carefully used the film to build our empathy with these brave campaigners. There are some truly impressive performances. Ian Hart is superb as the young David Carr, young, idealistic, funny, brave and angry. Rosana Pastor is just as good as the woman he loses his heart too, the sort of feminist warrior ideal that is the staple of films like this, but whom she makes feel exceptionally vibrant and alive. Loach throws us into the trenches with these guys, showing us their lives and loves, allowing us to follow them through triumph and loss. It’s a film that demands we respect and admire these people who came from far and wide to fight for what they believed in – and it’s right to do so.

As always with Loach, what I miss is the shades of grey. You cannot doubt the honesty and true feeling behind these people’s views. They believe that what they are saying is the only way. What Loach tends to do – and does here – is show anyone who disagrees with this view, no matter the reason, as either cowardly or self-serving. An American communist who stresses the need for moderation in their politics (to win sympathy from the Western powers) and professionalism in the military campaign is dismissed as a sell-out and a patsy. As often with Loach, the idea of getting results from moderation and organic change is seen as worse than a romantic failure that sticks completely to ideals. Perhaps it’s an interesting insight into why so many left-wing political movements have ended in failure?

But away from the politics this is a fine film, one of Loach’s best. The reconstruction of the Civil War – often confused, rushed trench warfare fighting unclear enemies – is brilliantly done. A storming of a village by David Carr’s militia group is shot with the sort of immediacy that would make Paul Greengrass jealous. And what Loach does better than almost any other filmmaker is bring real, living, passion to the screen. As the militia is finally betrayed for good by the Communists, the spittle-flecked, teary-cheeked anger of the characters at the Soviet-backed forces rounding them up feels almost unwatchably real.

I don’t always agree with Loach’s politics – and I strongly favour compromise and moderation as a better way of achieving long-term goals than blindly sticking to principles – but I have no argument with his qualities as a filmmaker. And Land and Freedom is so clearly one-from-the-heart that you can’t argue with it. No matter your political stance, you must be moved by it. And feel a profound sorrow about how a generation saw their dreams ripped away and betrayed.