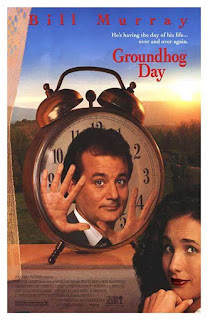 Few films are so well known they’ve become a shorthand. But mention “it’s like Groundhog Day” to anyone, and they know exactly what you mean. That’s a tribute to the film’s brilliant concept – but also its superb execution. Never mind just comedies, this is one of the smartest and best films to come out of America in the 1990s, so good it doesn’t seem to have aged a day. Groundhog Day is an enduring classic and quite wonderful.

Phil Connors (Bill Murray) is a misanthropic weatherman on a Pittsburgh news network. Every February, he is dispatched to the small town of Punxsutawney to cover “Groundhog Day”, an annual festivity where a local groundhog is used to predict whether winter will last six more weeks. Phil makes no secret of his contempt for the event, the town, its inhabitants and indeed everything else. After being trapped in the town by a snowstorm he failed to predict, Phil wakes up the next day – to find it’s Groundhog Day again! When the same thing happens the next day, Phil realises he is trapped living the same day in the small town over and over again – and no matter what he does during the day, he will always wake up in his hotel bed at 6am on Groundhog Day. What will he use the never-ending time for? Personal advantage? Or just maybe, becoming a better man?

Groundhog Day works because its concept is gloriously simple, and yet endlessly intriguing. Who can’t relate to the idea of a prolonged déjà vu? And anyway, don’t most of us feel at some points life is a never-ending treadmill (one of the town’s residents, asked what he would do, stuck in the same place every day where nothing you did mattered, replies “That about sums it up for me”)? Whole books have been written about the film’s philosophical roots – from Nietzsche to Buddhism – and the time loop’s duration. The film invites this because it keeps these concepts gloriously unexplained.

Imagine how much less powerful (and funny) the film would have been if Ramis had caved to studio pressure to either include a scene explaining why the time-loop was happening or providing a definitive answer for how long Phil spends in it. Hilariously, studio execs settled on a short period of time measured in months – others have gone for anywhere between decades to millennia. It’s certainly long enough for Phil to learn by heart the complete biographies of the entire town’s population, know the timeline of every event in the day to the second, and master everything from the piano (to Beethoven-like proficiency), to French and ice sculpting. There is a magic about not knowing the answer to these questions, that make the story brilliantly charming.

It also helps that the film remains, at heart, not science-fiction (which explanations would tip it towards) but a Capra-esque morality tale. The time-loop is, essentially, a second-chance over-and-over again for Phil to become a better person: to change from being a selfish misanthrope into a kinder, generous soul. That’s a story everyone can relate to, and becomes more and more heartfelt as the film continues (culminating in its uplifting conclusion). It also has the Capra touch of a heartless professional from the big city discovering (eventually) a warmth and truth in small-town America where the people are straight-forward and unaffected.

Which makes the film sound tediously feel-good. It escapes this completely because of three reasons. Firstly, initially Phil uses his new super-power of 24-hour immortality for what most of us would do – gain and greed. No consequences ever. Theft is child’s play when you know the exact second bank staff will be looking the other way. Easy to seduce a woman when you can ask her a series of questions on one circuit, then use her answers to pick her up on the next one. You can do whatever you want, confident the next day you’ll wake up in your hotel bed to I Got You Babe.

Even on his journey to eventual self-improvement, Phil only begins to change after exhausting all other options, including repeated attempts at suicide, to try and break the loop. And Phil, for all his charm, is not a good guy for a long time. His attempted seduction of producer Rita (a charmingly winning Andie MacDowell) over a never-ending series of first dates constantly fails, because no matter what happens, she eventually sees through his lack of decency (Phil’s attempts to recapture moments of spontaneous genuineness in later circuits fail completely).

Secondly, the film is brilliantly, gloriously funny – even with repeat viewings. Ramis’ brilliant shooting and structuring of the film focus on its repetition. We see the same shots and sets, hear the same music cues, the film is edited to stress repetition. Few things in comedy are as funny as anticipation and watching characters fly in the face of all the social conventions we deal with everyday. Seeing Phil’s different reactions to the same stimulus each time never fails to raise a laugh. Knowing the events almost as well as Phil, we eagerly await unexpected reactions. The script – by Ramis and Danny Rubin – is packed with brilliant lines, wonderful set-ups and is superbly structured. The first loop establishes all the settings and situations Phil will spend the rest of the film continually interacting with, and the film allows us to often be in on the joke with Phil (making us like him more).

Thirdly, and perhaps almost most importantly, the film could never have worked without Bill Murray in the lead role. For all the pull for Lost in Translation, this is surely Bill Murray’s finest performance, and stands comparison with the best work of Jimmy Stewart and Spencer Tracy, laced with that classic Murray touch. There is no other actor who can present a character so grouchy, deadpan, cynical and selfish but still make us love him. And – for all the terrible things Phil does in this film – you never stop liking him. His comic timing is exquisite (his varying reactions from frustration, confusion, glee and despair at his predicament spot on) but he also taps brilliantly into moments of genuine heart, loss and despair. Murray has spoken of how the theme of redemption spoke very strongly to him – and he plays perfectly a man so selfish that only after he has exhausted all other eventualities – including death – does he start to become a better man. It’s one of the greatest film performances of the 1990s, and the film is impossible without him.

Groundhog Day is pretty much perfect. The town of Punxsutawney is presented to us at first much like Phil sees it – old-fashioned and twee, populated by well-meaning but dull residents – but over the course of the loop, like Phil, we learn to embrace it. It perfectly mixes a glee at breaking the rules and embracing your inner misanthrope, with learning to develop and improve. It’s both hilarious and heart-warming, with every scene a classic and every performance spot-on. It has a timeless (!) quality about it, and its focus on telling a rollicking good story, full of heartfelt emotion and fabulous jokes, means you can add as much or as little spiritual depth to it as you like. It’s a modern It’s a Wonderful Life that might even be better.