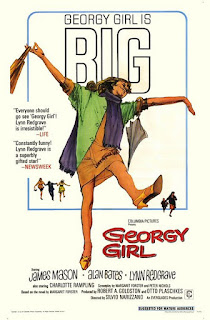 Made at the height of the Swinging Sixties – when London was the coolest city in the world – Georgy Girl is, in some respects, a time capsule. It was seen at the time as almost impossibly naughty and subversive, with open talk of abortions and affairs, mothers who feel their lives have been changed for the worse by having babies and young people struggling to accept their responsibilities. Now of course, it all looks rather tame. But there remains a charm to the film – helped above all by its performances – that still manages to make it a winning film, despite some of its attitudes raising entirely different questions today than its makers intended.

Georgy (Lynn Redgrave) is the plain-looking (and doesn’t the film keep reminding us of this!) daughter of the devoted butler (Bill Owen) to millionaire James Leamington (James Mason). Leamington has supported Georgy while she grows up – even letting her use his house for her children’s performance classes – but now his interest in her is changing. With his wife dying, James offers her the chance to become his mistress (with an actual contract). Georgy turns it down – not least because of her growing interest in Jos (Alan Bates), the fun-loving boyfriend of her flatmate Meredith (Charlotte Rampling), a drop-dead gorgeous violinist who treats him and everyone else with disdain. When Meredith falls pregnant with Jos’ baby, the two of them marry – but Meredith wants nothing to do with the child, a contrast to Georgy who has always dreamed of family.

It's actually a film of cold, hard realities. Beware any film which gives you a conventional happy ending – the hero chasing a woman down a street crying out that he loves her – around the half way mark. All the characters are presented with choices, and are forced to either compromise or run away. It’s telling that the characters who most fit the mood of the era invariably run away, while those with a more traditional outlook stick it out. You could argue that far from being a celebration of the 60s, Georgy Girl is a fierce critique.

At the time, Georgy was seen as something of a free spirit. Perhaps this was because of her unconventional looks or her playful imagination when working with the children in her performance class. Maybe it was the opening sequence, which sees her getting a fashionable haircut, only to instantly wash it out in a sink. Or could it be because she treats her father’s wishes for her to listen to her elders and betters with disdain? (Let’s skirt over the fact her father seems to be effectively pimping her to his employer.) The way she makes a scene at Leamington’s birthday party by performing a raunchy cabaret number? Most of all though it may well have been due to the catchy (and instantly recognisable) Seekers song that plays over the opening and closing of the movie and serves as her calling card. 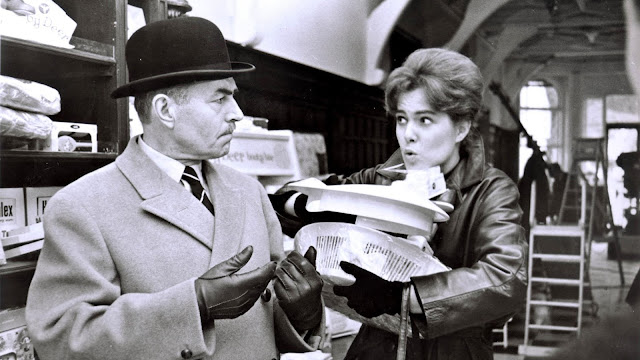 Interestingly though, watching it now, there is something incredibly conservative about Georgy – and quite possibly about the film itself. While she lives in the heart of the buzzing metropolis, Georgy’s dreams seem to come from another age: to become a mother, in a comfortable domestic setting. It’s hardly a feminist rallying cry. Georgy is so keen for this, she is perfectly willing to step (almost literally) into the shoes of Meredith, inheriting her husband, child and home. The film also misses no opportunity to remind the viewers Georgy is plain, dumpy and sexually inexperienced. Redgrave has been dressed to look like a sort of Teutonic housekeeper. The film doesn’t seem to quite know where to land between praising Georgy and slightly encouraging us, to chuckle at her.

Georgy isn’t in fact the swinging 60s icon in the film. That unquestionably is Charlotte Rampling as Meredith. Looking absolutely stunning, dressed by Mary Quant, Meredith is everything we expect from the era: confident, outgoing, ambitious, sexually liberated. But Meredith is also a stone-cold, ruthless, heartless bitch. Superbly played by Rampling, she treats Georgy as a servant, Jos as a mix between comfort blanket and vibrator, and decides to get married and have the child (rather than abort it as she has two others of Jos’ children – without telling him) because she’s bored. Once the poor child is born, the idea of sacrificing anything from her life is anathema to Meredith who promptly disappears over the horizon.

Georgy Girl is actually a film with much more mixed – even satiric – views of women and its era. The sort of liberation Meredith enjoys goes hand-in-hand with a selfish shirking of responsibility and using her beauty as a justification to treat everyone she meets as supplicants. Georgy is stuck in the middle, a woman in an era of growing freedoms but whose aims remain solidly in the Victorian era. The men are an equally mixed bag. Today we would certainly call what Leamington has been doing grooming. Jos has a happy-go-lucky 60s charm to him, but is flighty, unreliable, selfish and disappears with a smile the second the going gets tough. For all the film is sort of remembered for its joie-de-vive, it’s actually a searing look at the era with mixed feelings about its characters.

The fact we really end up caring for Georgy is due to Lynn Redgrave’s wonderful performance. A second choice for her sister Vanessa, the role typecast Redgrave in Hollywood’s minds as sort of dumpy loser (especially after her Oscar nomination). But she brings the role a real magnetism. Georgy is doomed to play second fiddle in people’s lives (and perhaps even her own). Perhaps the most 60s thing about her though is her determination to get what she wants – whether that is avoiding an affair with her father’s employer, or securing a good life for Meredith’s baby. 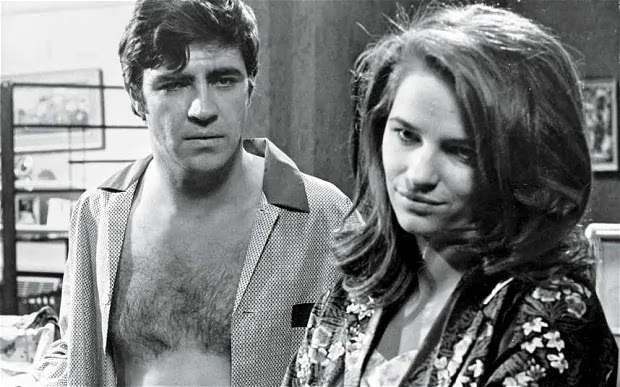 The rest of the cast are equally strong. Bates brings the best of his impish charm to the part (even if at times he tries too hard), as well as a metrosexual edge to Jos as someone very comfortable with joking around and being a bit camp. James Mason (who took a massive pay cut for the role, a decision which paid off with an Oscar nomination) is superb as fragile but creepy Leamington, a man who believes he is genuinely in love and is also excited at the prospect of replacing his bed-ridden wife (played by Redgrave’s actual mother Rachel Kempson, adding a nice Oedipal touch) with a younger model. Bill Owen mixes both a hilarious servility with assertions that his daughter “owes” Leamington something for all he’s done for her.

Georgy Girl works well because it is – and remains – funny as well as being dramatic and thought provoking. It might not be a feminist tract – and the character most likely to be seen as a feminist in the thing is its least sympathetic by far – and it might well affectionately scorn a woman who doesn’t look like a conventional man’s idea of attractive, and give her a traditional outlook behind a playful exterior – but it’s an energetic and rather charming film that does make you care. Separating it from the era it’s set in, might well do it a world of good.