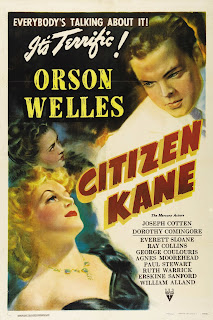 Writing about Citizen Kane is rather like writing about the Mona Lisa. Both are works of art so famous and influential that you are intimately familiar with them even if you’ve never seen them. But what makes them such constant delights is that, leaving everything else aside, the Mona Lisa is beautiful to look at – and Citizen Kane is hugely enjoyable to watch. Welles’ masterpiece – frequently hailed as the greatest film ever made – is about as close to perfection as you can get.

Entire books have been written about seemingly every aspect of the film’s creation. Welles’ original intention was to call the film American. It’s a fitting title. Citizen Kane is perhaps the finest film ever made on the corruption that ambition, money and power bring to the American spirit. Kane starts out as a pioneering idealist, but his fatal flaw his is need for power. That need to seize control of everything extends from buying all the art he can find in Europe to controlling the lives of all around him. It’s the mentality that will force his second wife into an opera career she is hopelessly unsuited for. It will eventually leave him sitting alone in his huge mansion, surrounded by wealth but bereft of friends. A large part of the American Dream is about “making it big” – and few make it bigger than Kane, and have so little to show for it at the end.

The film is a character study of ambition and power, using a framing device of the late Kane’s final word: “Rosebud”. What did he mean? Will finding out provide the key to understanding this powerful, elliptical man? A reporter (William Alland) aims to find out by interviewing key people from Kane’s life. From their recollections, the story of Kane’s life slowly comes together in a non-linear style. Charles Foster Kane (Orson Welles) as a young child inherits one of the world’s largest gold mines. Coming of age, Kane decides to use his wealth to become a press baron. He builds a news empire and runs for Governor – but the public revelation of his affair with amateur singer Susan (Dorothy Comingore) ruins his campaign. He builds a mansion on a man-made mountain, Xanadu, but is isolated and friendless in the echoing rooms of his own mausoleum. 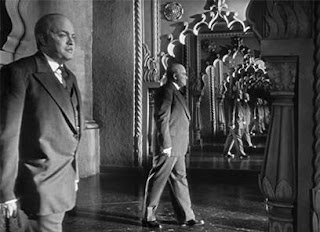 You can argue the same thing happened to Welles himself. Citizen Kane is his own mausoleum, the only time in his life when everything went right. Also, probably the only time Welles’ attention stuck to something long enough to deliver. Welles memorably called working on a film set “the biggest electric train set any boy ever had”, and the entire film is saturated in his creative glee at trying so many new tricks. Citizen Kane bought to the forefront so many methods of film-making, its influence has been so pervasive on film today, that it’s hard to see how revolutionary it appeared at the time.

Welles worked with cameraman Gregg Toland to push the film into a whole new visual language, deeply influenced by German expressionistic film. It’s a beautiful film to look at, and each shot is covered with meaning, Welles’ eye for the theatrical image matched with Toland’s genius for visual language. 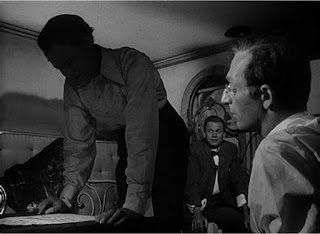 Citizen Kane is rarely thought of as a noir film, but it’s possibly the most noirish film you’ll ever see. Watching it again I was struck with how often shadows dominate the screen. Faces are frequently obscured, most famously in the projection room scene, where Thompson receives his instructions to find out what “Rosebud” means. But at key moments, faces disappear into black – while preparing his “Statement of principles” that will fill the front page of Kane’s first edition at the Inquirer, his face is lost in murky darkness. We hear what he is saying, but what is he thinking at this moment? It’s impossible to tell. Long shadows and inky black segments fill the frame frequently – it’s a film that gives a true feeling of darkness and unknowability at its heart. 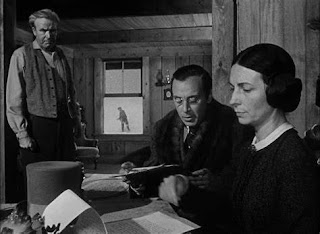 This is mixed with the theatrical flourish of its constant deep focus. Almost unheard of at the time, every shot of Kane is in perfect focus. It makes for visual compositions inspired by theatre, and ripe with dramatic meaning. Kane’s parents and his guardian William Parks Thatcher (George Coulouris) organise the future of the young Kane in the foreground, while we see the child playing outside in the show through a window. The deep focus turns Xanadu into a museum of lost chances and dreams, and the Inquirer newspaper office into an increasingly dark corridor of ambition, with people’s fates decided in foreground while we see them trapped in the background.

If that wasn’t enough, Toland uses angles Hollywood films hadn’t dreamed of. For some scenes, trenches were dug into the set and the camera placed in it, allowing the camera to stare up, with the actors towering over us. Citizen Kane is often claimed to be the first film where ceilings needed to build for the sets, as Toland’s angles and camerawork frequently made them visible. It’s not completely true, but it speaks to the visual impact of the film. Nothing really like this had been widely seen before. And I’ve not even mentioned the soaring, swooping tracking shots that pass through signs and buildings, the sort of inspired movement of the camera so many directors before had avoided in favour of stationary recording of the story. It’s visionary stuff.

The same was true for the film’s sound and music. Welles used his experience from radio to turn the soundscape of the film into something truly different. In radio, all cuts are managed by sound, but film had traditionally used only visuals to mark edits. Here, sound is used as often as visuals. When Kane runs for Governor, the sound and vision cut seamlessly from Leland on the stump for Kane to Kane finishing the same speech at a cavernous rally. Early in the film, the words “Happy Christmas” are skilfully cut together to leap forward years. Bernard Herrmann’s spare but perfect score, rather than laid over every scene, only comes in (as on radio) where emotional or transitional change is needed.

But then this is a film that uses editing as a way to tell story that few films before had tried. The sequence showing the collapse of Kane’s marriage to President’s niece Emily Monroe Norton (Ruth Warwick) is the perfect example. Over about two minutes of screen time we see several short scenes, all set at the breakfast table. Each scene shows a progressive step in their relationship collapsing, from loving exasperation to annoyance to anger to mute loathing. The scenes are no more than 20-30 seconds each, but the film perfectly moves from one to the other. The music slowly changes from a romantic waltz to a cold discordant rhythm. Transitions are marked by wipes. In each scene the actors move further apart at their breakfast table, the dialogue becomes harsher, sharper and more confrontational as the room they sit in becomes grander. In a few moments, an entire marriage story is told. It’s quite simply marvellous. The sequence is bookended by matching camera movements, gliding in and then out from the room. 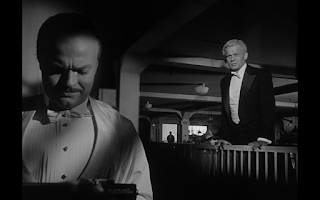 You could speak for pages and pages (as indeed people have) about what a marvel Kane is. Welles’ vision and willingness to push the boundaries created an environment where all his collaborators worked to achieve their best, set free from the restrictions of more traditional moviemaking to stretch themselves as artists in a way rarely allowed. But it’s easy to forget what a marvellous story Citizen Kane is, what an entertaining and brilliantly constructed film it is and how every scene has something that delights and enthrals.

There’s controversy over who wrote the script. Welles and Herman J Mankiewicz are credited – although arguments have been made that each deserved the lion’s share. Whoever did create it, the script is quite simply superb. Economic, but packed with wonderful lines and some extraordinary speeches (Mr Bernstein’s speech about a powerful memory of a young woman he saw once from a distance is quite simply one of the best small-scale speeches you’ll see). Every scene is brilliantly assembled, and gives fabulous material to an extraordinary cast of actors.

It makes for a compelling character study, wrapped into a series of brilliantly done vignettes. Each set of recollections – from Thatcher, business manager Mr Bernstein (Everett Sloane), old friend Jedidah (Joseph Cotton) and ex-wife Susan (Dorothy Comingore) – makes for a fabulous series of self-contained scenes, each gaining richer and deeper meaning with every subsequent reflection that follows. There are so many sensational scenes I hardly know where to begin: you could write an essay about each one. Thatcher’s serio-comic reflections of the roguishly cheeky Kane are wonderful. Bernstein’s memories of the chancer coming good – with a brilliantly playful celebration scene – wonderfully entertaining. Jedidah and Susan’s far more tainted reflections of the man’s flaws make for wonderfully constructed drama, presenting a corrupted and bullying Kane. In every scene there is a beautiful moment of dialogue or drama which sticks in the memory.

The acting is equally good. Cotton settles into the groove many of his finest roles would fit into – the never-quite-grew-up schoolboy, who slowly realises his hero has feet of clay. Comingore is wonderfully fragile and then increasingly bitter as Kane’s ill-used second wife, forced into a humiliating career because Kane won’t be married to a failure. Sloane is charmingly loyal, with beautiful moments of profound sadness, as Bernstein. Coulouris is brilliantly funny as the exasperated Thatcher. Ray Collins’ is smooth and unabashed as Kane’s political rival. Agnes Moorehead is tinged with sadness and ambition for her son as Kane‘s mother. 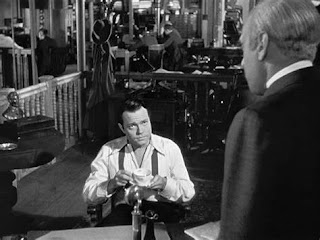 But at the heart of Citizen Kane – in every sense – is Welles. His handpicked crew was some of the best in the business – but it was Welles’ inspiration, his willingness to imagine techniques and approaches un-attempted before, that encouraged them to their finest work here. With the magnetic force of personality that was his hallmark, he inspired everyone to give their very best. And he led from the front. The film is a triumph of drama, tragedy and comedy, directed with sublime grace. Welles the actor is perfectly cast, the part almost a riff on his own cult of personality, the mix of pride and overweening ambition and little-boy cheek crossed with self-destructive laziness. Welles’ performance is faultless in the film, taking Kane from the smirking chap happy to lose a million dollars a year (“at the rate of a million dollars a year I’ll need to close this place…in 60 years”) to the bloated old man, trashing his wife’s room after she walks out. Perfect.

The only tragic note about Citizen Kane is that this wasn’t the first in a career of non-stop genius from Welles. Instead, flaws in his own personality, combined with his ability to make enemies and lack of ability to focus on the task in hand, increasingly consumed Welles, making him eventually a lost great, a man wandering from film set to film set, taking on small roles for cheques that might one day help him make a film. But he’ll always have Kane, the sort of film that is a marvel which can never, ever disappoint. With every scene a classic, every moment compelling, every beat in it perfectly judged, its influence stretching to almost every film made since the late 1940s – it deserves its place as the greatest film of all time.