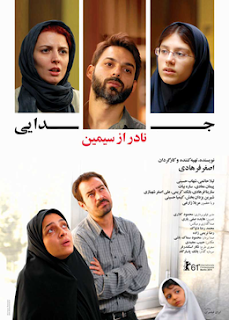 It’s very easy today to imagine Iran as another world. A mysterious country, locked behind an oppressive regime that we are constantly told by our leaders is a frightening, distant place not to be trusted. But this prosperous country, with its rich historical background, isn’t some sort of Mars. It’s full of regular, normal people just trying to do their best for their families. It’s the strongest thing you’ll take out of Asghar Farhadi’s heartfelt, low-key, deeply moving masterpiece: deep down, we are all united by how circumstances push us into desperate situations with few good options.

Married couple Nader (Payman Maadi) and Simin (Leila Natami) have petitioned for divorce. Secular Muslims, they want to emigrate to find better opportunities for their teenage daughter Termeh (Sarina Farhadi). Simin wants to leave now – but Nader won’t leave while his aged father (Ali-Ashgar Shahbazi), suffering from Alzheimer’s, is alive. Their only option, under Iranian law, is divorce. However, separation makes it impossible for Nader to care during the day for his father. He hires Razieh (Sareh Bayet), a devout Muslim – but the position causes her a host of problems, from concerns about touching another man (she calls her Imam to ask if she can change the old man’s trousers after an accident), to her worries about what will happen if her husband Hodjat (Shahab Hosseini), a feckless man in and out of prison, finds out she is working for a single man. After Razieh ties  Nader’s father to a bed to keep him safe, she and Nader argue, during which he forces her out of his flat. Razieh then has a miscarriage that night. Did Nader know she was pregnant? If so, he could face prison for murder. Both families find themselves in desperate straits.

A Separation is a superb piece of film-making, deceptively simple in its assembly and shooting, but carrying a huge emotional force as we become invested in the lives of the people it follows. Farhadi never passes moral judgement over his characters. All of them have strong reasons for doing what they are doing, rooted in what’s best for the family. Everyone acts in the way they feel will best protect their loved ones. Arguments become profoundly personal and damaging – but they don’t start out that way. It’s simply a question of things slipping out of control.

That’s not helped by the laws of the Iranian state. Farhadi’s film is very careful to never pass explicit comment on Iran’s laws. But the nature of the regime – and the mood it encourages – is at the heart of all the problems. Tensions are perhaps inevitable between the middle-class and secular Nadar and Simin, and the more working-class and traditional Razieh and Hodjat. This is class and religion in one cocktail, both sides carrying impressions that are nearly impossible to shake off.

But it’s the laws of the state that amplify this: where a man and a wife must go through a demanding pantomime for divorce or a man can be sentenced for murder for the lightest push on the shoulder of a woman who then miscarries. The judge hearing the pre-trial arguments (a very gentle and dignified performance from Babrl Karimi) may be the very soul of reasonableness, but it doesn’t change the fact that the laws he must rigidly uphold continually inflame the situation.

The story is brilliantly constructed, a tightly plotted melodrama that frequently presents new information that forces us to reinterpret what we have seen and heard. It mixes superbly domestic drama and crime procedural, and frequently only the audience has the complete picture of everything that has happened. Key arguments – the loss of money, Razieh’s unexplained absence from her duties, the difficulties of keeping Nadar’s father safe – are shown to us from every angle. But still, we understand the very natural – and human – reactions that people who do not have all the facts, as we have, make. Perhaps it’s the constant stress of simply living – magnified in a crowded and difficult city like Tehran – that seem to put every character on a knife-edge, terrified that a wrong step could land them in a host of trouble.

But that’s the power of Farhadi’s film-making – he invests every shot with sympathy and empathy. He wants us to understand everyone. It would be easy to make Hodjat exactly the sort of chippy, argumentative, working-class figure Nadar clearly thinks he is – but we also see his desperation, poverty, shame at not being able to provide for his family. Simin is easy to see as a woman trying to escape to live her own life – but she is also willing to cause collateral damage to the rest of her family. Nadar is the picture of a more liberal Iranian – but he also refuses to listen to people and is selfish in equating what he wants with what everyone else should want. There are no easy moral choices here – and no clear “heroes and baddies” for us to invest in.

The film reminds us that on every side of a dispute there are real people, with real concerns. And that the collateral damage can be just as bad. Nadar’s father is left even more catatonic than he was at the film’s start. Nadar and Simin’s daughter Termeh becomes consumed with guilt and disillusionment over the moral compromises her parents are forced to make. Her distress plays constantly at the edges of scenes – and even her morals eventually end up compromised – only coming fully into focus with Farhadi’s heartbreakingly open-ended conclusion.

The acting is superb. Payman Maadi is harassed and desperate under a veneer of controlled reason. Leila Natami plays a modern career woman, compromising herself every day, with great power and intensity. Sareh Bayet’s vulnerability is matched only with her profound sense that she cannot compromise her morals, in a performance that brilliantly mixes fear, resentment, warmth and anger. Shahab Hosseini superbly brings to a life a loud, brash man who is secretly profoundly weak, scared and trapped. There isn’t a wrong note in the entire cast, and Farhadi’s patient and intimate direction and shooting allows each of them to bring their characters superbly to life.

This is a brilliant film which shows an intriguing – but sensitive – insight into life in Iran. But it most strongly demonstrates how human we all are. Everyone in the film is doing what they feel is best for their family – be that trying to hold them together, forcing the issue of emigration, earning money from work, or suing for compensation for the loss of a child. It’s a glorious reminder of how our lives can be altered by circumstances, and our intentions drastically different from their impact.