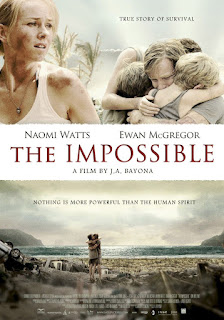 In 2004 the Boxing Day tsunami hit the Indian ocean. The resulting tidal waves devastated communities in several countries, with almost a quarter of a million casualties. The impact left rich and poor alike in a desperate struggle to survive. These terrible events form the basis of this emotionally powerful, if sometimes manipulative, film that recreates the remarkable story of a Spanish family, separated in the tsunami, who all miraculously survived.

Here the family is re-imagined as British (presumably to sell the film around the world a little easier, as they now all speak English). Maria (Naomi Watts) is a doctor who for the last few years has been a stay-at-home mum for her three sons Lucas (Tom Holland), on the cusp of becoming a teenager, Thomas (Samuel Joslin) and Simon (Oaklee Pendegast), both younger. Her husband is businessman Henry (Ewan McGregor). Staying in Thailand for a Christmas vacation, the family are separated when the tsunami hits their resort. Maria (badly injured) and Lucas make their way to a hospital, where Lucas struggles to get the life-saving treatment his mum needs. Henry is trapped in the resort with their other two sons, desperately trying to find his missing wife and child. Around them swirl an entire country of refugees and affected people, all of them trying to find family members.

The Impossible gets an awful lot right. The recreation of the tsunami is faultless. You’ll feel every moment of terror as the water rips through the family’s high-end vacation spot. As Maria and Lucas are swept far away by a deep swell of fast-flowing water (stuffed with mud, filth and debris) you’ll feel every blow to bodies as debris hammers into them, and feel like you’ve lived through every moment of desperation as the two fight against the current to reach each other. The sense of powerlessness and fear – a mother trying to be brave for her son, a son frightened and desperate for reassurance, ashamed at being scared – are powerful, deeply affecting and hugely immersive. Bayona’s experience of directing horror comes wonderfully into play here, as he knows exactly how to push our buttons and make us feel the emotion, fear and anxiety of the situation.

This tone continues through most of the film’s first hour which largely follows Maria and Lucas as they attempt to reach the hospital. Running on adrenalin, Maria only slowly begins to succumb to exhaustion as her grievous wounds (smashed ribs, a horrifically graphic leg injury) sap her strength, even while she tries to maintain an air of calm for her son. What is intriguing in this sequence is that, like a set of scales, as the mother becomes weaker the son becomes stronger – Lucas suddenly propelled into become an adult. Lucas increasingly takes decisions on how best to survive, argues at times for hard calls and becomes, in many ways, the adult in the situation.

This sequence is helped hugely by the performances of the two actors. The physical commitment of every actor isn’t to be doubted (Holland and Watts spent hellish weeks in water tanks filming – although this is only relative compared to the horror of the actual tsunami). Watts (Oscar-nominated) brings power to a mother who believes she is the only thing her son has left in the world, and must survive at all costs for him. Her buttoning down of her terror for as long as she can is deeply moving, and she brings the part significant heart. Tom Holland is simply a revelation as Lucas. He develops an authority well beyond his years, the complexity of the emotions he deals with – from fear to anger and defiance, determination, anxiety, relief and despair – would have challenged an actor three times his age. Holland never loses trace of the central kindness in Lucas – no matter how desperate the situation – and he is the undoubted star of the film, his portrayal of a child forced to grow up scarily quickly is deeply affecting. 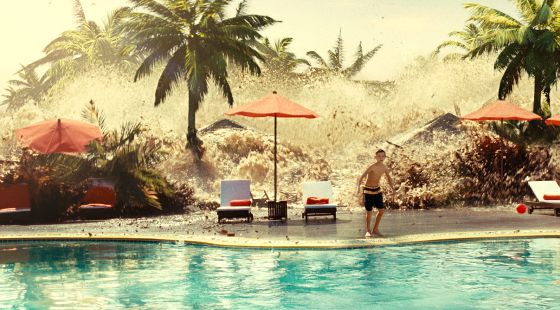 Ewan McGregor offers similarly excellent work. Left searching through the rubble of his holiday home, McGregor brilliantly captures a sense of a father trying to deny that his control over events has disappeared. He excels in an extremely moving breakdown scene – after finally contacting his wife’s parents in the UK, he collapses in desperate, uncontrollable sobs of guilt and fear, apologising for not knowing what to do. It’s some of the actor’s best work, brilliantly tapping into his natural warmth for excellent effect.

Where the film struggles more is in its focus. While it is a story of one – affluent – Western family, so naturally its focus will be there, it does turn the rest of the cast into little more than extras. Some focus is given to the Thai people: a group of poor local people is crucial in saving Maria and Lucas’ lives and getting them to a hospital, their immediate humanity and generosity reducing Maria (and the audience) to tears of gratitude, but that’s the only real look we get at them. The hospital where a large part of the story is set is full of Westerners, bar the staff. All the victims we spend significant time with are white and Western (all are presented sympathetically, bar a pair of Americans for whom the tsunami is a holiday inconvenience).

But you could watch the film and not realise that so many of the people who died were part of the indigenous population – and while thousands of Westerners also perished, the survivors did at least return to their homes, whereas those living in affected countries lost everything.

The film’s other flaw is the manipulative tone it moves into late on, in particular a series of prolonged “missed moments” as the separated family walk around the hospital, just missing each other. This may well have actually happened, but is so contrived that it feels like a narrative flourish. The plot slows down in the second half as the characters search for each other. The film’s final title cards were a perfect opportunity to bring more focus to other victims – and to mention the death toll and impact on the countries – but avoids all of this to simply confirm it’s based on a true story.

The Impossible has lots of powerful moments. Its moments of emotion are raw and affecting and, manipulative as it is, you do celebrate when the family is reunited. But it’s also a film that loses its way a bit – which captures a superb survivalist story but then becomes too sentimental towards its end. And by not doing more to acknowledge the impact on the Thai people, among others, you can’t help but feel it turns this tsunami into something that affected rich, white, Westerners – which is harder to forgive.