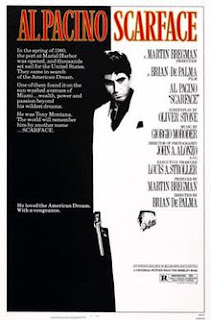 Remember when Al Pacino played the softly spoken, chillingly self-contained Michael Corleone? Watching The Godfather, who could have imagined that performance would be the outlier in a career that gleefully embraced the insanely OTT in a way few other great actors have dared. And possibly no other performance in Pacino’s career was as large as in Scarface, a ball of nervous energy, foul-mouthed aggression and drug-fuelled instability, the burning heart at the centre of Brian de Palma’s wildfire of a film. Scarface dials every single thing up to about 11 and then some, becoming the director’s brashest and most enduring work – but it owes everything to Pacino’s furious, unreserved energy at its centre.

Pacino plays Tony Montana, a working-class crook from Cuba dispatched (along with boatloads of undesirables from Castro’s regime) to Miami in the early 80s. There, in refugee camps and the local community, it’s crime and violence that give these guys the best chance of grabbing a share of the American Dream. Montana is no different, graduating from hits to drug deals and swiftly moving up the chain with his determination, gruff no-nonsense attitude, fierce loyalty and ruthless focus. But once you hit the top and the world is yours, there is really only one way to go – back down again, made easier when you are hooked on snorting mountains of your own product, incestuously in love with your sister Gina (Mary Elizabeth Mastrantonio) and your increasing arrogance and unreliability put you on the wrong side of your partners and kingpins in South America.

A remake of the 1932 original by Howard Hawks (the film is dedicated to Hawks and the scriptwriter Ben Hecht), Scarface is a brash, unsettling, nervy and incredibly violent cartoon-style gangster movie that owes almost its entire legacy to Pacino’s snarling wit at the centre. Is Pacino taking the piss here with this performance? Surely, he must have wondered if he could get away with it. This is a whirlwind tour-de-force, Pacino throwing himself into it with nothing left in the locker-room. He delightedly wraps his vocal chords around a thick Cuban accent (turning words like cockroach into a three syllable delight – “Cock-ah-roatch”) and embraces his small stature by turning Tony into a little pressure cooker. Seemingly incapable (bar one scene) of staying still, he’s supremely tense, his shoulders hunched up, his teeth on edge, voice growling.

It gives the film an unpredictable energy, because you don’t know what Pacino the performer will do any more than the characters do. He’ll suddenly throw you off with a moment of silence, just as often as he will blast your eardrums with a roar of anger. Emotionally Tony is a complete mess. His obsession with his sister is obvious, a devotion that Tony seems to only half (if that) understand is sexual in nature. But he also has a slight homoerotic bond with best friend Manny Ray (Steven Bauer – the only actor of Cuban heritage in the film), their closeness and macho-posturing carrying more than a whiff of Top Gun-ish “he protests too much”.

Pacino also invests Tony with strangely sympathetic qualities. Sure he’s a violent and ruthless killer and dedicated criminal, but he’s also got a firm sense of loyalty and certain moral lines he won’t cross. He’s got no time for bullshitters and respects only strength and honesty – watch the scene where he brutally talks over the weasely Omar (F. Murray Abraham – jetting back and forth between shooting this and Amadeus for goodness sake!) during a negotiation with drug lord Sosa – he has no respect or regard for his more politically minded boss, only for straight-talking that makes a deal.

It’s all this that ends up making Tony an anti-hero the viewer sort of ends up liking – even while he dopes himself to the brim with coke and funnels piles of it onto the street (not that we see any of that). Tony is a violent killer, but he’s a sort of honest man, a monster yes but a public one that we enjoy seeing. Tony himself recognises this, calling out a crowd of people in a posh restaurant for treating him as a monster so that they can feel better about themselves (slightly undermined by the fact he’s coked to the eyeballs, incoherent and has brutally ended his marriage a second earlier).

So much is Tony a force of nature that, hilariously, it feels like many of the fans of the film – bling gangsters and wannabe street punks – miss that this film is a brutal satire of the culture of excess and greed. Tony’s life falls apart the more money he gets, his addictions and problems growing as his wealth does. He’s an instinctive, but not wise, man who builds a household of fantastic excess and tasteless ostentation (surely, like Saddam, his taps are gold-plated) but also manages to destroy his business and life in a few months due to his greed, stupidity and self-destructive streak.

The things that made him a high-riser are lost the more Tony surrounds himself with garish status symbols. Inevitable destruction walks hand-in-hand with Tony’s “more is more” attitude. The more he attempts to add class and polish to his life, the more he demonstrates his own lack of both qualities. Also, as he gets more obsessed with pointless status symbols he loses the very skills – honesty, energy, shrewdness – that made him a kingpin in the first place. Instead he becomes a drug-fuelled narcissist, making impulsively stupid decisions and wrecking everything he spent the first half of the film building up. Tony Montana is the face of a certain type of Reagan/Thatcher economics, where private enterprise rolls in and ruthlessly takes and takes, with no regard for the impact on other people and no interest in sustainability.

De Palma captures this pretty well – although he probably ends up making this satire of excess more of a hubristic tragedy. Largely because the film falls so hard for Tony – or rather Pacino – that the fact that Tony is, despite his own moral code, a pretty reprehensible person can be easily lost. Not that de Palma probably cares that much, since his main aim here seems to be to create a hell of a ride. And there are some great set-pieces, and some wonderfully character beats - not least a sequence where Tony seizes control of the empire from weak boss Robert Loggia and sinister corrupt cop Harris Yulin.

The film certainly does that, flying from set-piece to set-piece so swiftly and with such a sense of pace and shark-like momentum, you almost don’t notice that it runs for as long as it does. Every few minutes gives us a scene with stand-out moments of either Pacino grandstanding, shocking violence or both. Scarface is a very violent film – everything from chain saws to bullets are used to pull gangster bodies apart – and while it has a sort of moral message (“Excess is bad”) it’s really just an excuse like Cecil B DeMille to make us feel good about ourselves by watching someone pretty bad (but with a few redeeming qualities) dance like a bear for two and a bit hours doing terrible things (entertainingly) before being carved down in a hail of bullets as the devil comes round to collect.