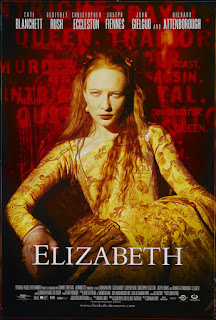 Not many people would think of Elizabeth as being an influential film. But I would say the roots of all modern costume drama can be found in this British Tudor epic. Classic costume drama before had seen the focus on “thees and thous”, Greensleeves, lovely costumes, well-lit sets and a certain grandeur. Elizabeth re-set the table. Mixing The Godfather with Elizabeth R, Elizabeth turned costume drama into a world of dark schemes, political intrigue, violence and lashings of sex and passion. It would leave prestige Hollywood dramas of the 70s and 80s behind and turn costume drama into something far darker, grittier and sexual than ever before.

The film follows the early years of the reign of Elizabeth I (Cate Blanchett). The queen is young, naïve and passionate. She’s well educated and smart, but still impulsive and too much in thrall to her emotions. She’s far too open about her sex-filled love affair with Robert Dudley (Joseph Fiennes), new-made Earl of Leicester, and too inexperienced to heed the advice of either William Cecil (Richard Attenborough), who is pushing her towards the middle-ground of European alliances, or Francis Walsingham (Geoffrey Rush), who argues for Elizabeth to lead a strong nation, willing to take on its enemies. Conspiracies whirl around the court, as disaffected Catholics led by the Duke of Norfolk (Christopher Eccleston) plot to seize the crown and restore the “true religion”.

Elizabeth’s style is triumphant. Many of the scenes take place in dimly lit halls at court, and candlelit private chambers. The palace is seemingly made of nooks and crannies where conspirators and lovers can silently retreat and keep their intentions secret. The music – wonderfully composed by David Hirschfelder – is a mixture of urgent marches and murky sounding chords, which brings a watery effect to the soundtrack, as if every moment could twist into swamp-like traps of treachery. The film is briskly cut, frequently jump-cutting and putting together impressive montages of conspirators or events. 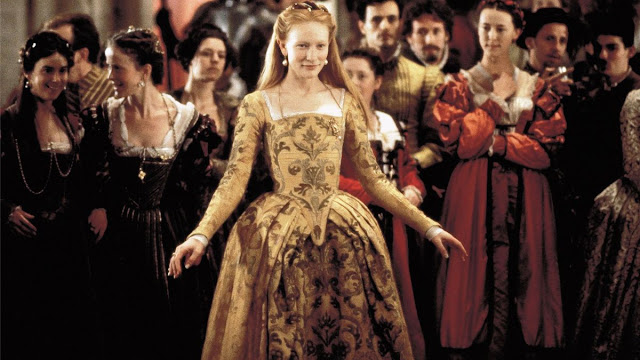 The film starts with such a montage of protestants being burned: moving swiftly from a death warrant being stamped, to heads being brutally (and bloodily) shaved to an overhead shot of the cart carrying the martyrs to their deaths, culminating in their cries as the fires reach hold and finally overwhelm the soundtrack. It’s a sign straightaway that this will be very different from the traditional taste and decorum of a costume drama – and this film won’t flinch away from the grimness. Shekhar Kapur’s direction throughout is stylish, dynamic and uses editing and cinematic tricks to great effect (if at times with a little too much flash).

And the film is soaking in political intrigue – conspiracies and plots swell and unfold, with the film finally culminating in a clearly Godfather-esque purge of the Queen’s enemies. This is Tudor drama as Mafia flick, the lords of England little better than the heads of the five families, and Elizabeth the young heir they underestimate at their peril. It takes historical action and brings it definitely into a very modern feeling conspiracy thriller, using cinematic tricks and good editing to break away from the more staid period pieces of the 1970s into something much darker and atmospheric.

That also carries across into its exploration of sex, something that has got even more play in costume dramas since. It’s odd to think that the film was quite controversial at the time for showing Elizabeth and Dudley engaged in a passionate sexual affair, or for suggesting that the Queen “became a virgin” as part of piece of political showmanship. The film fronts and centres the young naivety of Elizabeth and her all-consuming fascination with Dudley – well played by Joseph Fiennes as a part romantic dreamer, part tragic weakling – and her slow realisation that there is no place for romance and passion in the world of being a queen.

Because the film is also a coming of age drama: how did Elizabeth become the Greatest Tudor Monarch? Cate Blanchett is inspired casting choice, dominating the film with a multi-faceted performance that sees Elizabeth change from an excited young girl into the distant authoritarian figure. Blanchett gets to play it all here, showing her impressive range, charting this changing personality as not always linear – so a scene of giddy romance can be followed by her sharpness when challenging the lords of England over matters of religion and then back to weakness. While you can argue the film undermines Elizabeth’s intelligence (particularly early on) what it does capture supremely well is her determination and her wilfulness. It also triumphantly turns her into a very human figure, Blanchett brilliantly showing a character forcefully – and consciously – reshaping herself to meet the demands of her office.

Around Blanchett, Kapur assembles possibly one of the most eclectic casts in history. Can you think of another film where you could see John Gielgud one scene and Eric Cantona the next? Richard Attenborough and Angus Deayton side-by-side? Fortunately, the core roles are played by assured and impressive performers. Eccleston makes for a wonderfully imperious, self-important Norfolk. Cassel goes gleefully over-the-top as the camp Anjou. Frain, Craig and others excel in early roles. The pick of the lot is a mesmeric performance by Rush as the sinister but loyal Walsingham, an eminence grise willing to work things in the background Elizabeth wants but cannot ask for, a wartime consigliere, several steps ahead of the rest and whose loyalty to Elizabeth is matched only by his ruthlessness. 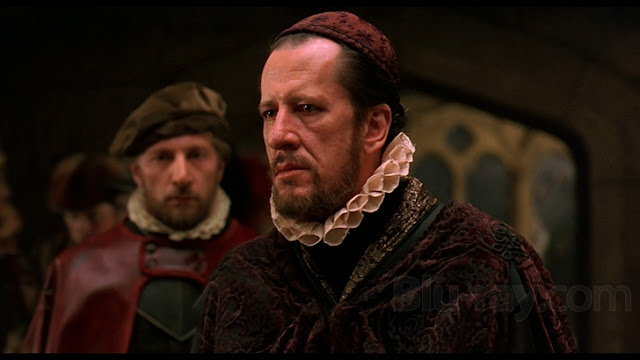 Historically the film has only a passing resemblance to reality. Elizabeth’s political astuteness was sharper from the first than the film gives her credit for (although, as its aim is to stress how humanity must be sacrificed for power, there are artistic reasons for this). Bishop Gardiner, leader of the anti-Elizabeth church faction, had died during the reign of Mary I. Cecil is played as an unimaginative old man, when he was in fact in his thirties when Elizabeth came to the throne, and her most trusted and wisest advisor. Numerous events are telescoped and combined – the Ridolfi plot which (roughly) climaxes the film took place 14 years into Elizabeth’s rule, not within at most a year. The film ends with a series of historical captions, not a single one of which is actually true. Michael Hirst’s script plays fast and loose with history (and with the odd dodgy line along the way) but he’s got a flair for bringing out the drama.

But does it matter? After all, who really looks to films for their history lessons? What Elizabeth is trying to do is to turn history into cinema, and this it does to glorious effect. It also managed to change our idea of what a “history film” was. After Elizabeth, history dramas would turn increasingly into darker tales, tinged with sex and conspiracy. But this film remains one of the best, directed with real flair and style by Kapur and powered by a superb performance by Cate Blanchett. Elizabeth gets more or less everything (apart from the facts of course) stylishly right and tells English history with gripping and entertaining intensity.