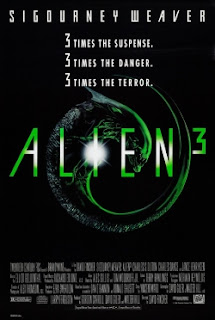 Few films feel more like a grim contractual obligation than Alien 3. If you want a real blood bath, you’d get more entertainment from reading about the tortured history of its production. Over nearly six years it saw off several scripts, at least two directors (including David Fincher resigning over continual studio interference) and Sigourney Weaver only agreeing to do the film if she was killed off at the end (well that and a big pay cheque).

All of this ended up as a depressing, grim and largely unenjoyable mess that goes over the same old ground as the first two films, but with diminishing returns. After the events of Aliens, our heroes ship crash-lands on a prison planet. Everyone on board is killed other than Ripley (we’ll come back to that…). The planet is populated by criminals who have embraced religion, led by Dillon (Charles S. Dutton) and a small staff of warders (Brian Glover and Ralph Brown) and Dr Clemens (Charles Dance). The company orders Ripley to sit tight and get picked up. But did an Alien on the ship lead to its crash? Is there now an alien on the planet? And is Ripley carrying an Alien inside of her?

It won’t surprise you to hear that the answers to all these questions are of course “yes”. And the film takes a painfully long time to get there. This is made all the more painful by the shockingly, uninvolving grimness of the story’s telling. Nowhere is this more clear than in the ruthless killing off of the surviving characters from Aliens. After the warmth and humanity of that story – and Cameron’s skilled creation of a family dynamic between Ripley, Hicks and most especially the mother-daughter bond between Ripley and Newt, it’s hard not to feel that their brutal off-screen deaths are a real slap-in-the-face. At a stroke all the character development of the previous film is negated. And so we get back on the treadmill of another monster hunt.

It’s not helped either by the fact there is hardly a character here you could give two hoots about. The prison is almost completely staffed by British character actors, peppered with the odd American. The script totally fails to give any of these people really distinctive personalities at all, before the Alien starts munching through them. On top of which the lazy script is littered with effing and jeffing, that serves to make the characters very angry all the time and even less engaging. The film’s most interesting new character, troubled Dr Clemens (a decent performance of world-weary sadness from Dance) is dead by Act Two, and the rest are basically an identikit pile of same-old-same-old. Dutton gets some good speeches as the prisoner’s morally complex leader, but he’s fighting an up-hill battle against turgid dialogue and tired old plotting.

Already by Alien 3 it feels like the franchise was out of ideas. Yet again “the company” is up to no good, only interested in making a buck off the creature. A post-industrial landscape again sees a number of people killed off in ever more familiar ways. The alien looks a bit like a dog this time (or an Ox if you watch the longer and even duller extended cut), but that’s about the most original thing here. And at the centre of the misery we have a grimly resigned and disinterested Weaver, who seemingly can’t wait for that Alien to burst out of her chest and end her association with the franchise for good.

It’s very hard to find anything enjoyable at all about this film. And it feels odd to say that about a film which is about people being brutally murdered one-by-one by an alien. But the others had touches of hope, humanity and demonic poetry to them. This is just a parade of slumming it British character actors, playing foul-mouthed rapists and murderers, getting torn apart. And then the film ends with a colossal downer even more downier than all the rest of the sludge you’ve had to sit through.

Basically Alien 3 reminds us that, with the monster as a motiveless killing machine, there weren’t many places to go with it. It’s not like it could suddenly reveal a motivation or something. So it seems the franchise was doomed – as it has been almost ever since this – to be a familiar parade of facehuggers, dark rooms, slow builds as people meander towards death down corridors, blood splatter and people who barely qualify as characters meeting grisily ends. Alien 3 is depressing and unrewarding in so many ways.