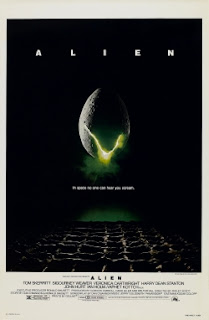 For decades, space was seen as a place of wonder. But Alien reminded us it was also a place where no one can hear you scream. We dream the vast void out there contains life: but what if the life we found was a relentless killing machine, a seemingly invulnerable monster literally having humanity for breakfast? Ridley Scott’s Alien took science fiction and ran it through the blender of horror, turning its space ship into a terrifying haunted house with an alien straight out of slasher films. It’s still a landmark today.

In deep space, the Nostromo’s crew is pulled out of hypersleep early – long before arriving back in our solar system. A strange distress call from an unidentified vessel needs to be investigated, on standing orders from “the company”. The seven-strong crew lands their ship and a party heads out – only to return with third officer Kane (John Hurt) with a strange alien creature attached to his face. The creature can’t be removed until it detaches itself of its own accord. All seems well until an unfortunate dinner party – at which point the crew finds itself being hunted one-by-one by a relentless alien monster.

Scott’s film is so famous today it’s very hard not to forget your foreknowledge of what’s going to happen and to experience it as its original viewers did. But it still works brilliantly – even if almost everyone watching knows only Ripley is getting out of this alive. The film is a masterpiece of slow-burn tension punctuated by moments of shocking horror. The final Alien itself doesn’t appear until almost an hour into the picture – but before then we’ve had our nerves more than jangled by the unsettling disquiet of the film’s mood. From the Nostromo, to the storm-laden planet they land on, and the vast alien ship – now a tomb of dismembered corpses with an unsettling organic look, like a giant carcass – everything in the film is designed to put us ill-at-ease. You can’t watch this film and expect anything to turn out for the best.

The camera prowls around the dank, grimy and run-down ship – space travel has rarely looked this unglamorous – like the predator that will hunt the crew. It’s slow, stately lingering on the crew, their faces, the eerily unsettling sounds and score, all serve to act like an advance funeral. Every single beat of the film stresses claustrophobia and dirt. It looks like a horrible trap already, and the film embraces a sense of grim inevitability. The observational style of the editing and shooting as we follow the characters, overhearing their bickering and functional work-based conversations, also helps add to this mounting sense of unease. It’s a surprisingly quiet film for much of its opening act, ambient noise and unsettingly lingering music dominating.

There is a poetical eeriness about the whole film. This is also partly from the sense of the ship being a society in microcosm. Much of the bickering is around bonus pay shares, the working-class engineers of the ship (one of whom is also black) bemoaning their smaller shares. The officers sit at the top, a mixture of entitled, distant, officious and daring. They have their own feuds over status, professional boundaries and personal rivalries. The captain is a laissez-faire professional, who offers only a general guidance and could really be just another member of the crew. The ship is like a giant oil-rig in space, with the crew basically a group of “truckers”. The film is as much about interpersonal tensions as it is about an alien monster who hunts people down.

But it is mainly about an alien monster that tears people apart. After almost an hour of deeply unsettling and unnerving build-up, when the monster (literally) rears its head, it’s a terrifying sight. We usually only see it briefly for small shots, but what we see is pure nightmare fuel. The creature is terrifying in its violence and power. It is partly human but also completely revolting. Covered in slime, it looks like a bizarre mix of a man, a giant penis and a vagina (its designer, HR Giger, reasoned nothing would be more unsettling and disturbing to us than seeing a beast that’s partly inspired by our own sexual organs). It creeps in corners, embraces the many shadows of Scott’s set and its capacity for violence seems unstoppable. Sharp editing and suggestion elaborates the visceral horror of its extending jaws punching through bone and flesh. It moves like an interpretative dancer and leaves a trail of blood. It’s unstoppable and infinitely cunning. It looks like your worst nightmare. 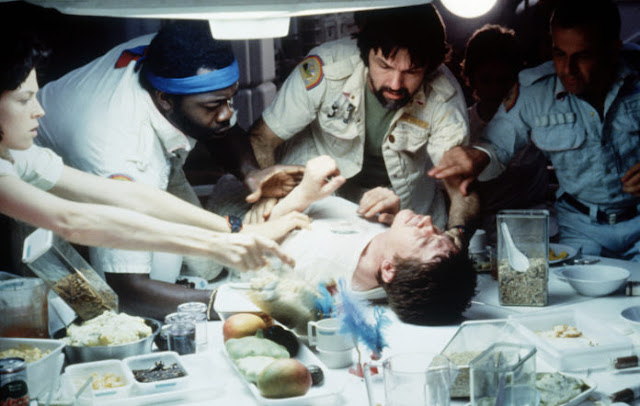 It’s all washed down with body horror. An alien that smothers its victims and shoves an egg down their throat which hatches through their chest becoming a slaughtering beast. There is an uneasy sexuality about this, right down to the “birth” of the creature being a grotesque parody of childbirth. The “birthing scene” is a masterpiece, the first moment in the film when the tension between the crew has eased – and the film itself seems to have relaxed for a moment from the knot of tension – that turns into one of the most memorable moments of body horror ever. The actors were allegedly told what would happen – but not how graphic it would be – and their horror-struck disgust (Veronica Cartwright was nearly knocked over by a powerful jetstream of mock blood and guts) and and shock gives the film a priceless realism.

Watching the film, it’s striking to me how much John Hurt’s Kane is shot as the hero early in the film. It’s he who wakes first from hypersleep. It’s Kane we follow the most for the early part of the film – he’s the one piloting the ship, volunteering to answer the distress call, urging his crew mates on as they investigate the alien vessel – it’s Kane who seems to be the hero. Making his brutal demise even more of a subconscious shock. On the other hand, Ripley is introduced as an officious, unpopular, by-the-book officer who it seems few other members of the crew like (Sigourney Weaver’s praetorian attitude helps a lot with this) – if you had to bet on someone to bite it early on, you’d pick her. The film continues to defy expectations. Characters who seem like they might be invulnerable are slaughtered early. Those who looked vulnerable survive until late on.

It’s a very strong cast. Weaver magnificently grows in authority as the film progresses, turning her abrasiveness into strength of character and moral determination. Hurt is very good as the unknowing victim-in-waiting. Kotto, chippy and defiant, is another stand-out. The finest performance through might well come from Ian Holm as science-officer Ash. Precise, cold, distant – but always hiding his own secret agenda – it’s an unsettlingly controlled performance that leads to a pay-off reveal that still works brilliantly today (and the character would have one of the most memorable death scenes in film, if he wasn’t in the same film as the most memorable death scene).

Scott’s filmmaking is brilliantly controlled, and the film is a horrifying masterpiece of tension and terror. The monster is skilfully shown at its worst (you’d never even guess in actuality it’s little more than a Doctor Who man-in-a-rubber-suit) and its design is faultless perfection. It’s not completely perfect – its build up might be ten minutes too long, and a late sequence that sees Weaver wearing little more than her undies looks hideously dated today – but it’s pretty close. Science fiction has never been scarier than it is here – hell the movies have rarely been scarer. In space no-one really can hear you scream.